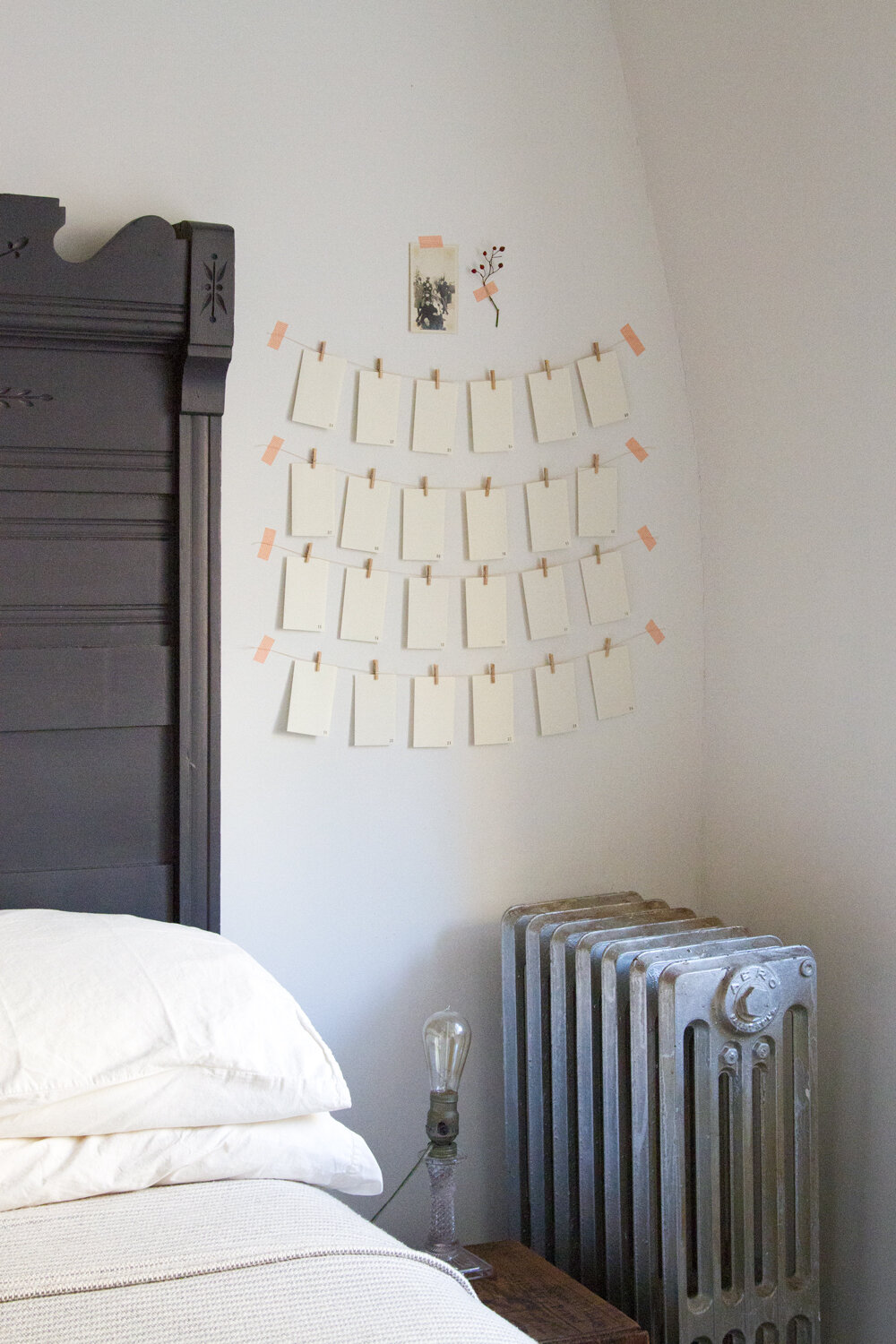 Growing up, my mom introduced an idea to our family that she called Advent Angels. The idea was a riff on Secret Santa, but it was more about actions than things. We’d draw names from a hat and for the month of December, we’d sneak around in the early mornings doing good deeds: making each other’s beds, laying out a special breakfast (a packet of instant oatmeal dumped into the bowl; a frozen waffle put into the toaster oven), and laying gifts of half-gone clementines on door jams. In the evenings we’d light candles by bedsides, and turn down covers, and press play on cassette players with cued-up carols. In a family of six, there were enough of us that there’d be at least a modicum of surprise when the day for revealing your angel came to pass (on Christmas eve, naturally).

It’s a tradition that I’d love to continue in my own family. There’s an opportunity, at this time of year especially, to feel buoyed by humanity, and kindness, and good cheer. And I want in on all that. I always want in on that.

Since we’re still a little small and young for advent angeling, this year, I made an advent calendar for our apartment. We’ll start on December 1—and we’ve got traveling (and eating) to do between now and then—but it’s nice to know that there’s a little something set up for us once we return home, travel weary, no doubt. And in case any of you want in on the magic, too, I thought better to share now than later.

I’ve fashioned the calendar out of business card-sized envelopes and cards, string, and washi tape, and because apparently I’m powerless in the face of miniature clothespins, 24 of those, too. 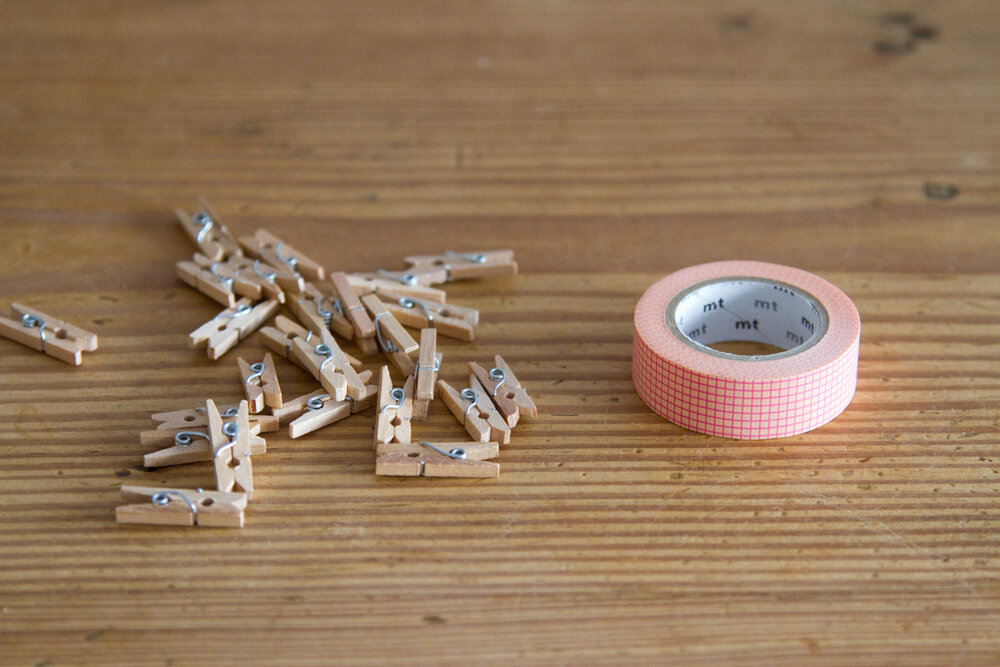 I found miniature clothespins and baby envelopes and cards at the Paper Source near our house, but I imagine you might be able to gather similar things close to where you are. The washi tape I snagged from Of a Kind’s very special holiday stationery shop. 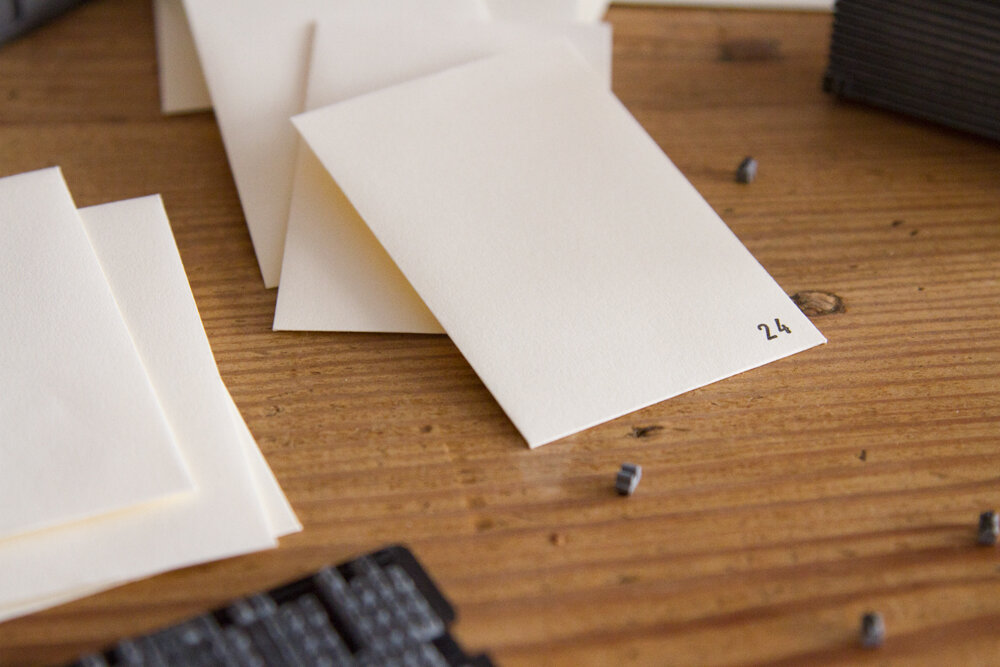 I used my rubber stamp set to mark 24 envelopes with numbers to count down the days, but hand-lettering would work as well. 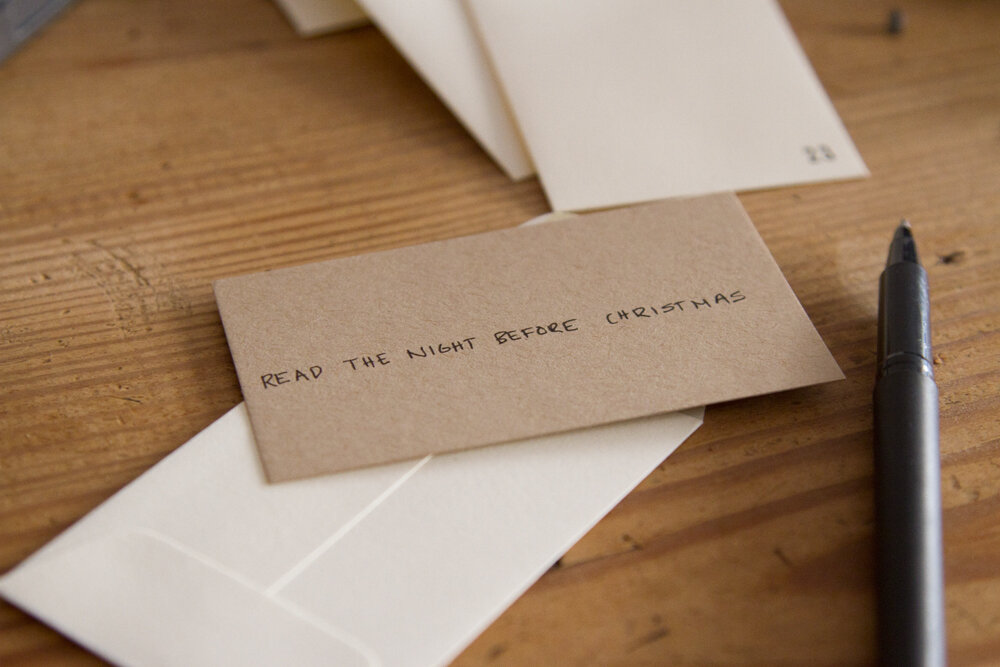 While traditional advent calendars are a way to mark off the days left before Christmas with treats of candy or gifts, I like the idea of the calendar serving as a reminder to take out the time to do something festive and familial—or just plain indulgent.

Into the envelopes I’ve tucked vouchers for activities and kindnesses timed to fall on days that will make them actually achieveable. 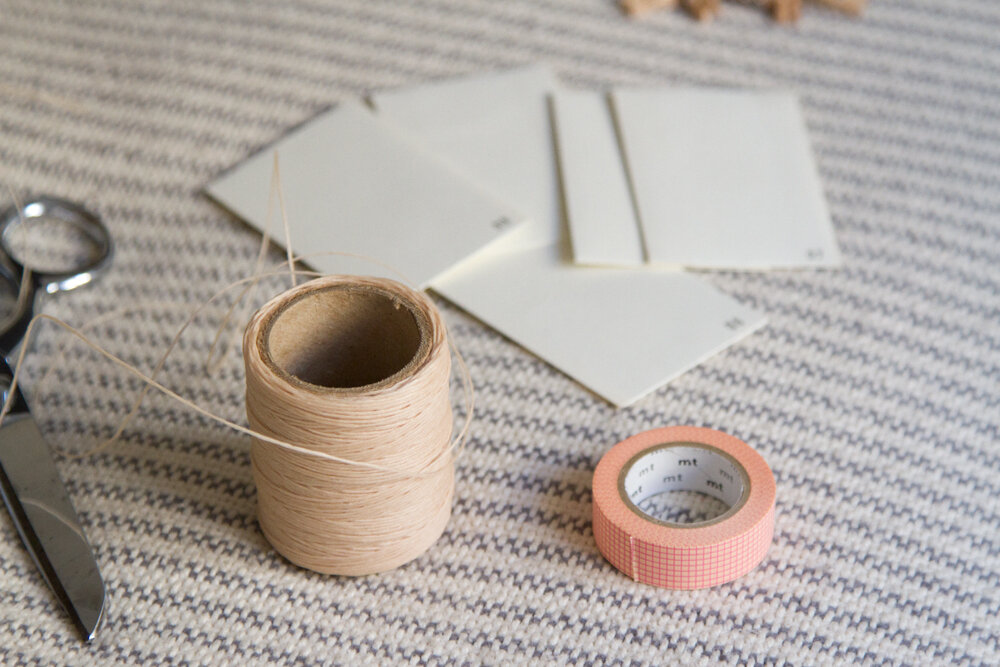 For securing the calendar to the wall, I used some waxed string that I had on hand but most any string or ribbon or twine would work. 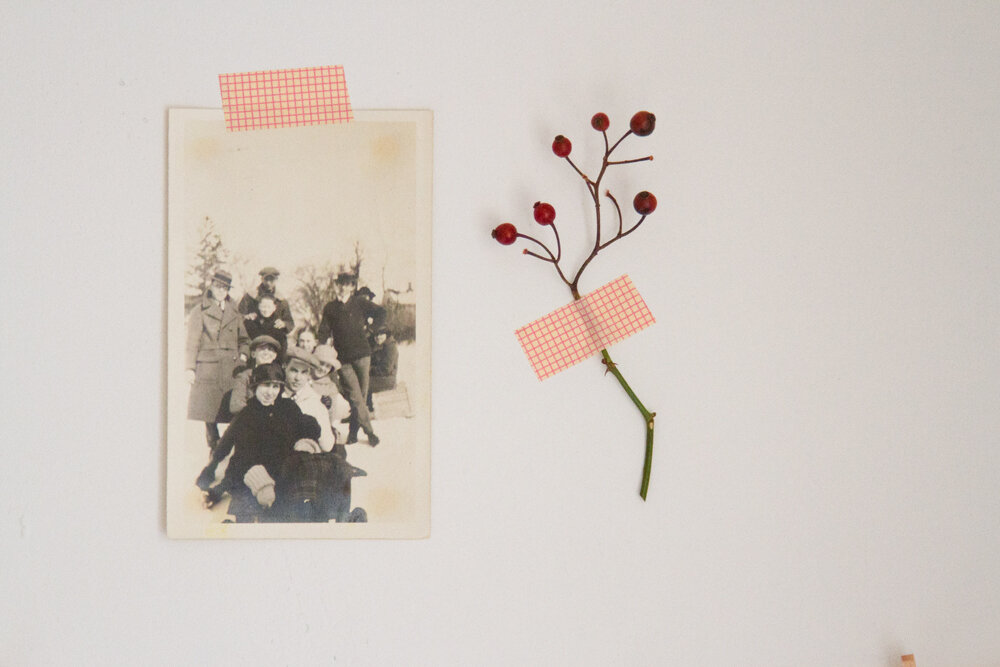 Because nothing says wintry good cheer better than my sassy great great Aunt Ruth Josephine (Faye Josephine’s namesake and my personal heroine) tobogganing, I taped up this favorite family photo alongside a sprig of rosehips. 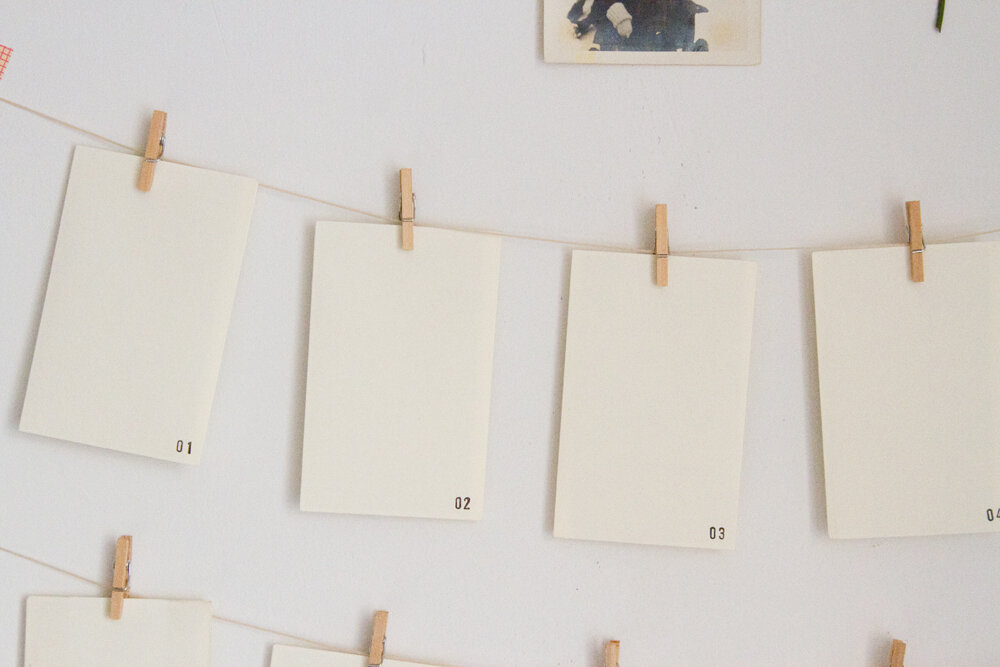 A close-up of those tiny clothespins, just in case you needed one. 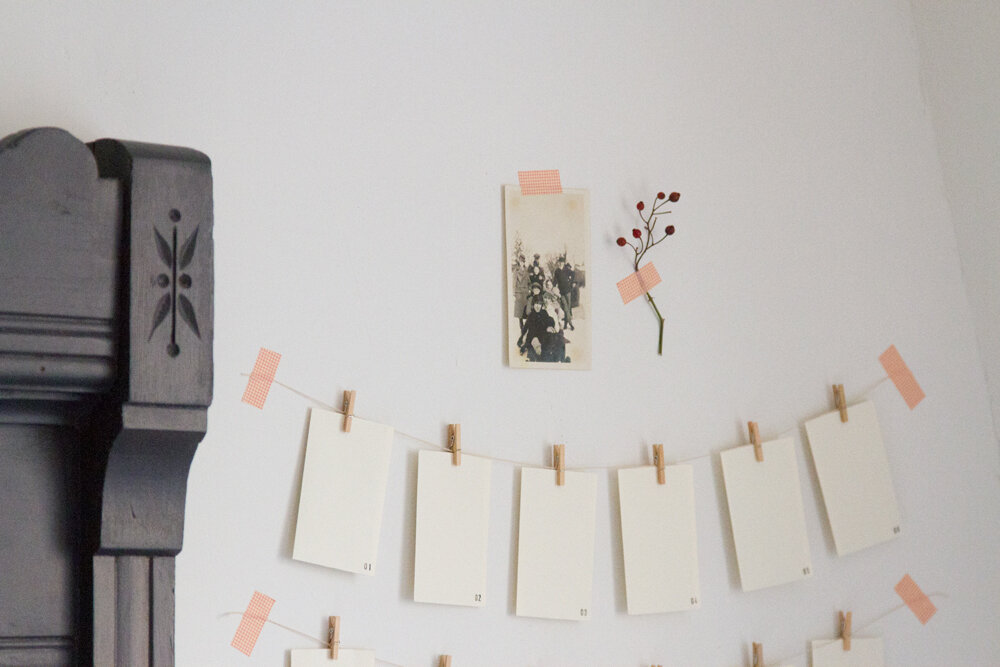 After taking these shots, I decided to double-secure the strings with the old loop-back trick. You know the one? Where you pull the length of string out by an inch or so, then fold it back over the original piece of tape and secure with a second length tape placed directly over the first making it so that the string can’t slip out? Well, now you do. 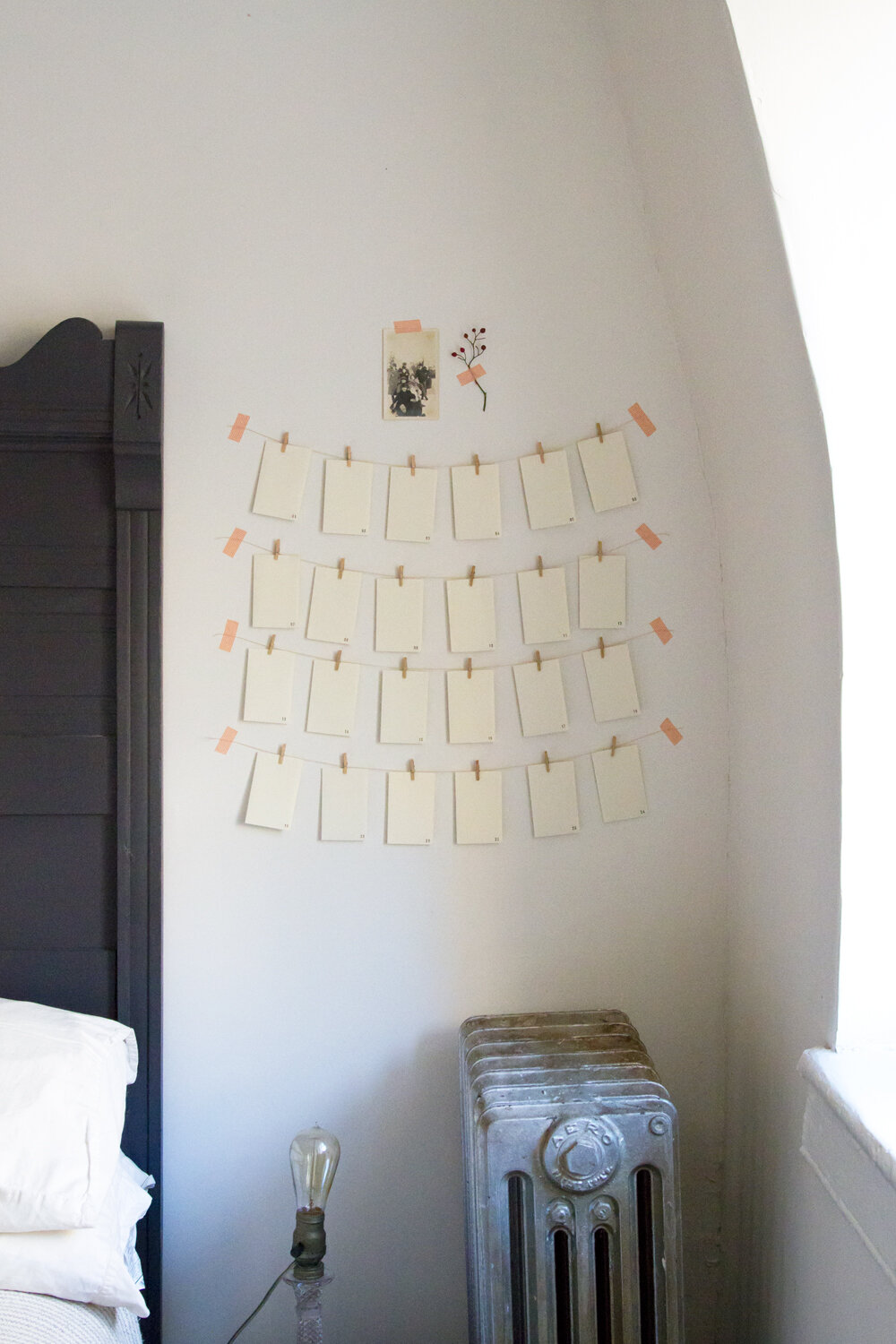 The finished product meets my criteria of not taking up too much room, not making me feel claustrophobic in a small space, and folding back into the small box where we keep the rest of our seasonal doo-dads. With any luck, I’ll be able to reuse the calendar year after year, subbing, likely, the surprises as best fits mood and age and general whereabouts.

In case you need some inspiration for gifts to put in your advent calendar, I’ll share mine, but the fun part is making it fit the particulars of your family. No doubt some of the dates on our calendar might shift. And some of the kindnesses might pop up utterly unscheduled, but here are 24 ideas I tucked into my clutter-free advent calendar:

1. In-bed coffee service. Because admittedly I get treated to this service far more regularly than someone else in my family, so…here’s an added push to return the favor.

2. Family outing to a tree lighting. Because who doesn’t love exuberant folderol in the great outdoors? We’re going to try to head to Rockefeller Center. It’ll be a total madhouse. #YOLO.

3. At-home facials. Because everybody loves ’em. Husbands especially. All you need is a washcloth, some cleanser or facial oil, and a willing partner to play at-home spa.

4. Pot of mulled wine. Because kicking off the weekend with a pot of mulled wine on the stove feels like a perfect mix of cozy and festive. Bonus, we’ll have friends to play along.

6. Family trip to a favorite breakfast spot. Because sometimes an early morning outing is just what you need to kickstart a Sunday.

7. Specially packed lunch to take to work. Because something a little more fancy than leftover soup won’t go unnoticed.

9. Pancakes for dinner. Because they’re the perfect vehicle for a light dusting of powered sugar snow.

10. Surprise seasonal cocktail. Because if December’s not made for Irish Cream, I’m not sure what is.

11. Hour-long child-free roam in the neighborhood bookstore. Because it’s nice to remember there’s a room beyond the children’s section.

12. Family skating at local outdoor rink. Because we’re still not sure if we can pull this one off this year, but a trip to watch the skaters would be (almost) as much fun.

14. Weeknight walk to see the displays on Fifth Avenue. Because, animatronic reindeers and people in miniature.

15. Screening of a favorite holiday movie + popcorn. Because James has never seen A Child’s Christmas in Wales.

19. Group gift-making. Because a little forced family fun in the name of giving to others lightens everyone’s load.

20. A weekend adventure to see lights in a faraway neighborhood. Because some people get really into light displays. And it’s nice to applaud their efforts.

21. Homemade eggnog making. Because it’s so much better than the stuff in the carton.

24. Family reading of the Night Before Christmas. Because, the moon on the breast of the new fallen snow.

What about you guys? Any favorite advent or otherwise traditions in your families?
UPDATE: For the curious, here’s the stamp set that I used to make the numbers.
family gifts holiday home
40 Comments
Share: 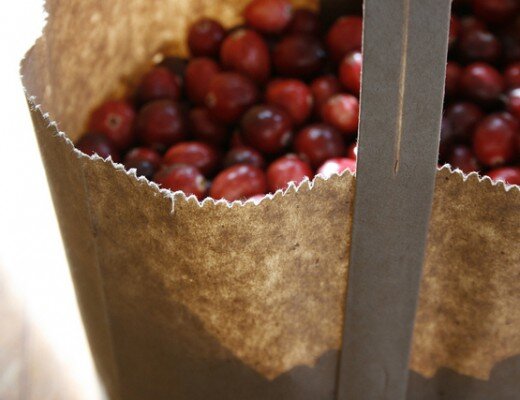 my week in objects. 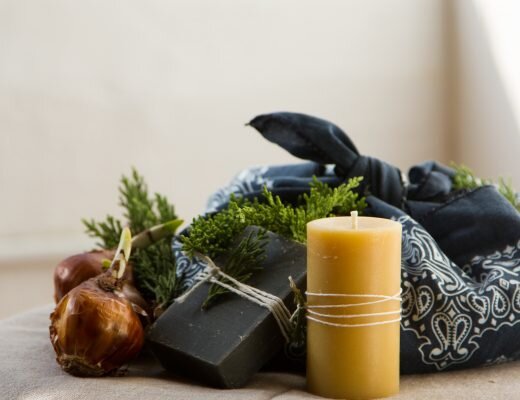 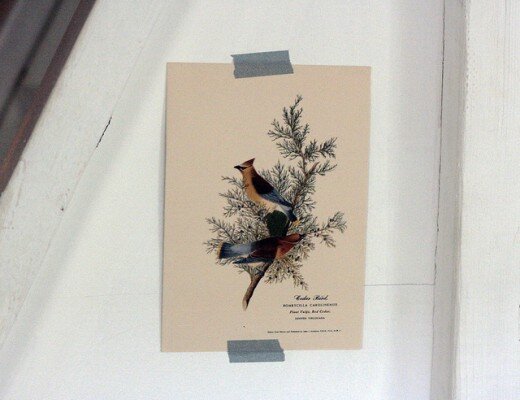