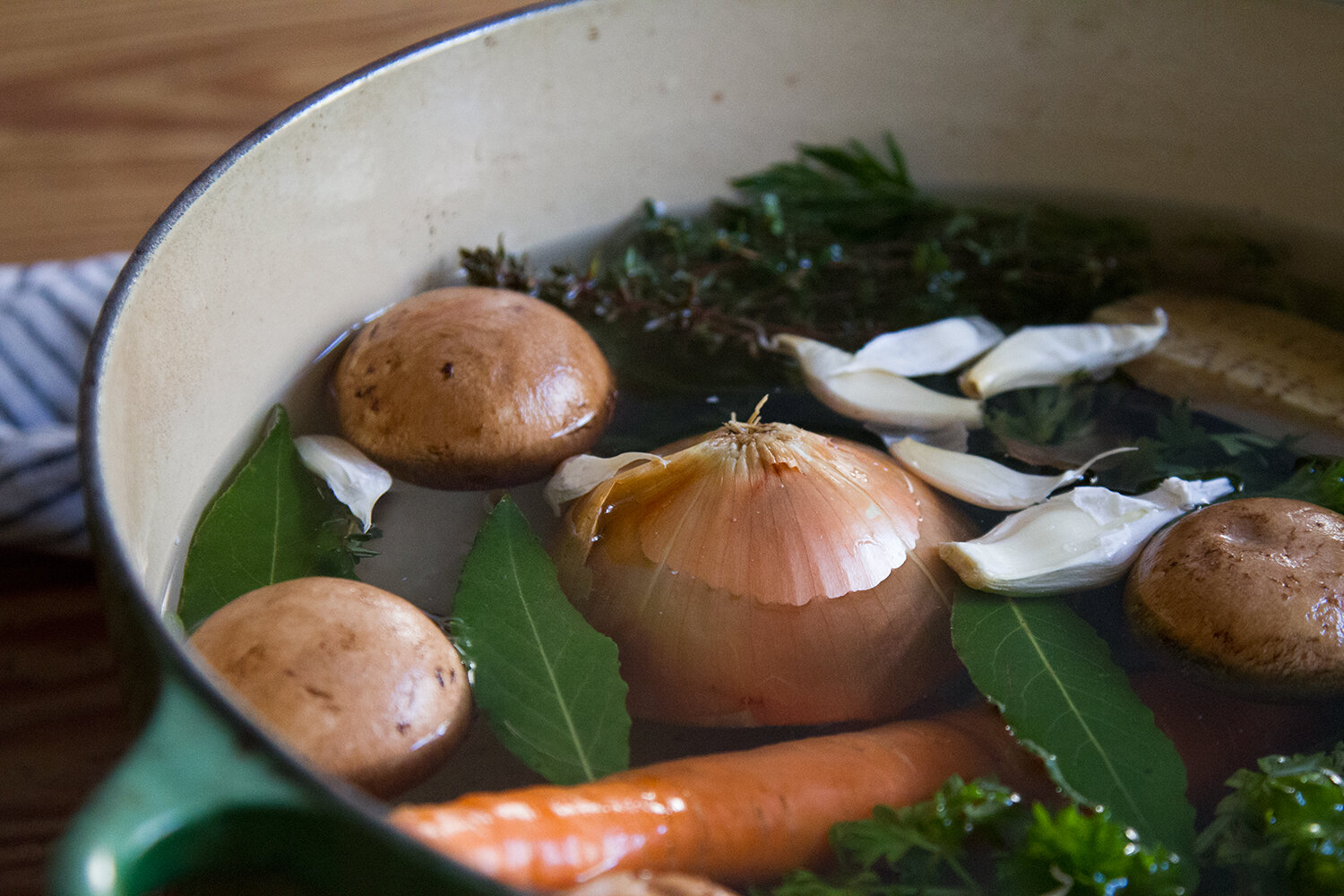 We had our first real bout of the stomach bug this weekend. And by we, I mean Faye. The parental units of this family are still in good health—fingers crossed—but when a toddler wakes up vomiting every half-hour for hours on end, I think it’s fair to say that the whole family is victim. 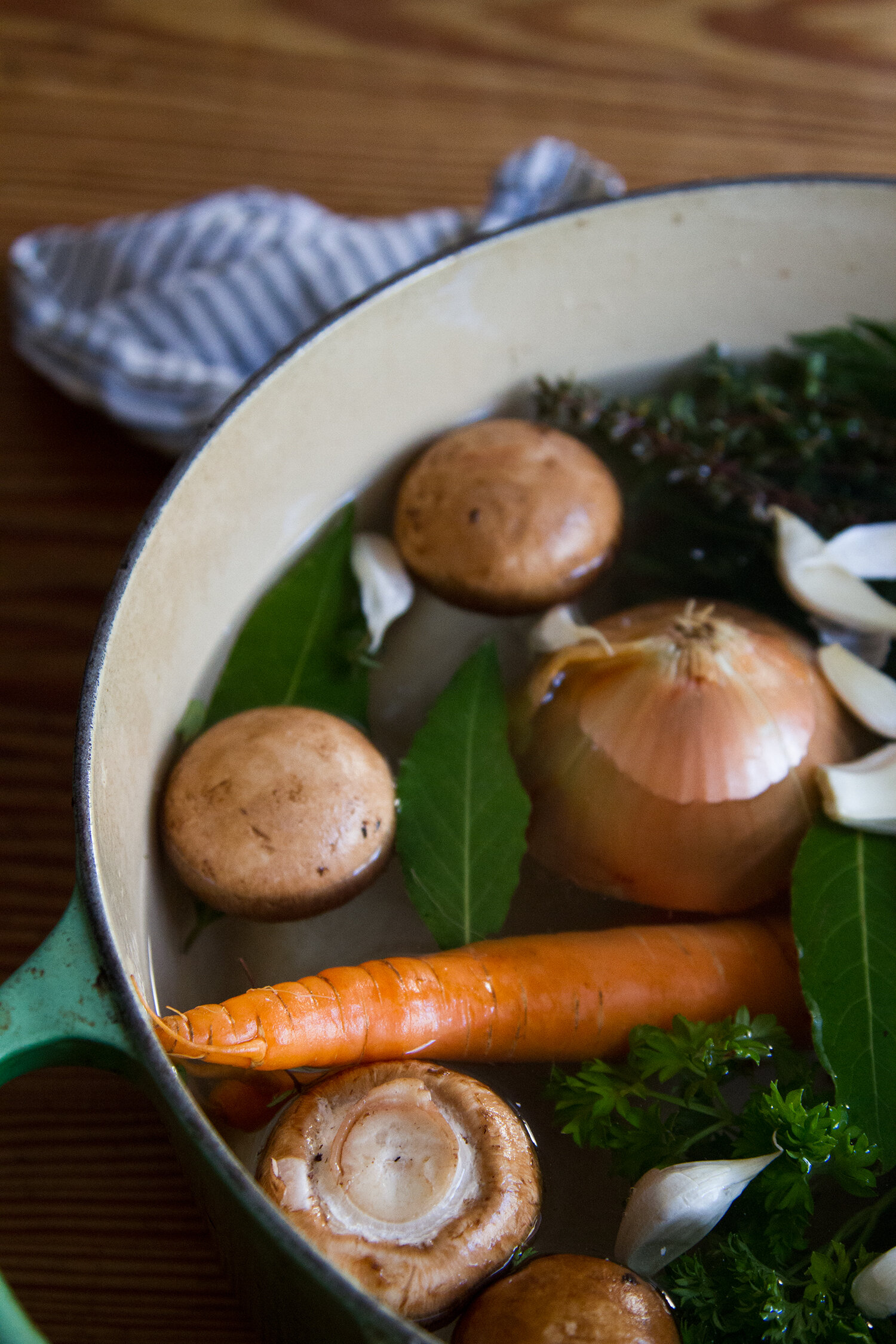 As I write, our own little bug is mercifully sleeping away. I have a drying rack filled with rags—washed and boiled and waiting to see if there will be time enough for them to dry before being put to use again. And as of a few minutes ago, I have mason jars filled with amber liquid, cooling and waiting their turn in the freezer for the next time disaster (or dinnertime) strikes.

Not much a good pot of warm vegetable broth can’t make better, I say.

The beauty of broth is that you hardly need a recipe at all. And there are about a million similar kinds of non-recipes floating around the internet, should you be interested in seeing other variations on the theme.

+ This one from Food 52 is wonderful and pretty to boot.
+ This one from Bon Appetit is similarly inspiring.
+ And this beautiful riff on the former is from my friend Alexa. 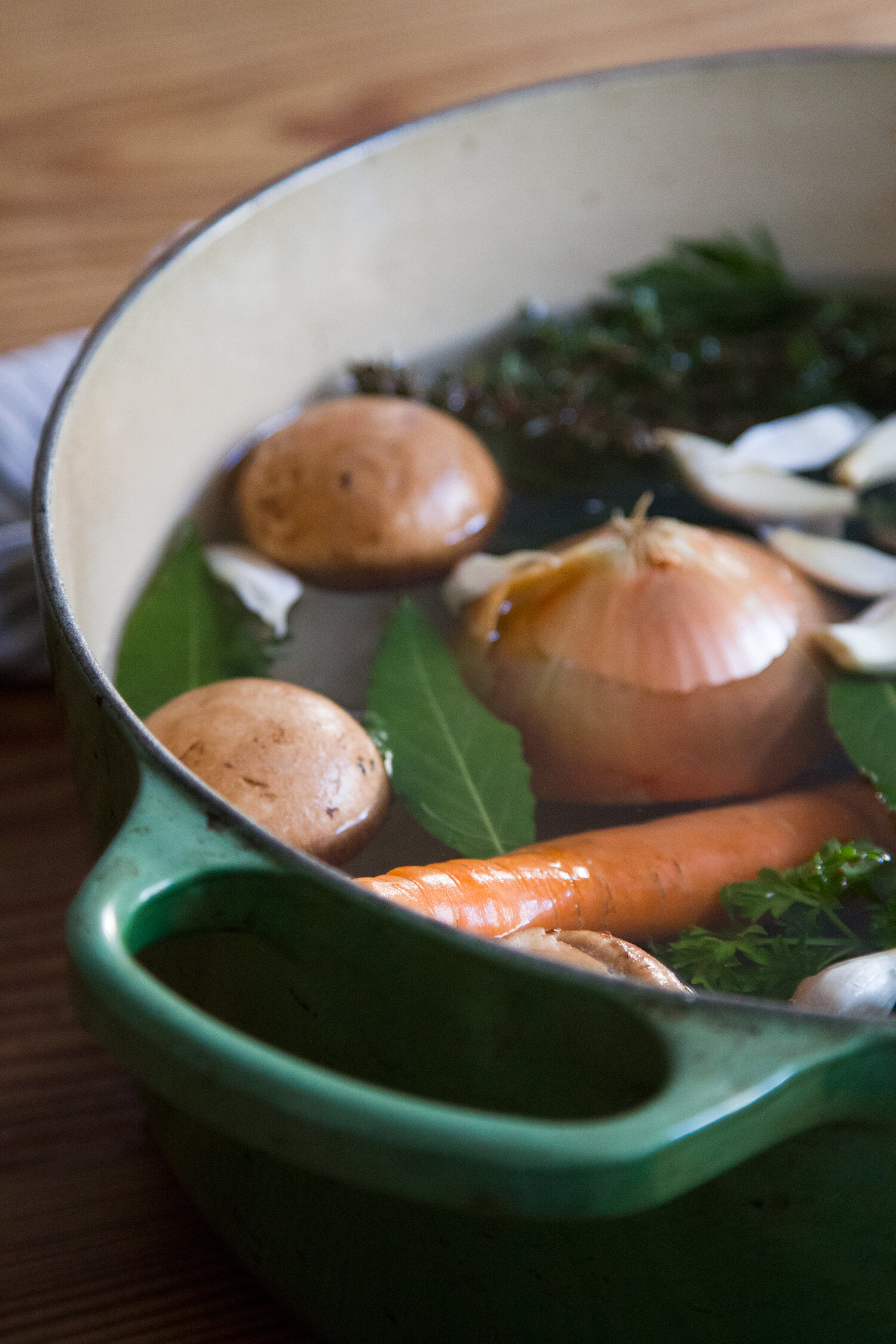 For the pot I set to simmering this morning, I used:

2 carrots and their tops
5 or 6 crimini mushrooms
1 onion, halved with the skins on
5 garlic cloves, skin on
1 large bunch of thyme
1 large bunch of parsley
2 bay leaves
6 or 8 black peppercorns, who counts?
and a thick rind of parmesan

I scrubbed the veggies and put them along with the herbs and cheese rind into our large dutch oven, filled it up with water, added a healthy sprinkle of salt and brought it to a boil. (There are two schools of thought on whether or not to chop the vegetables first; I, clearly, take the path of least resistance.) Once boiling, I covered the pot, turned down the heat, and set it to simmer on the stove for a few hours while we read Brave Irene twenty times and became increasingly excited every time we got to the page with the DOGGIES (soft g.) (A stomach bug has nothing on toddler enthusiasm for four-legged friends.) 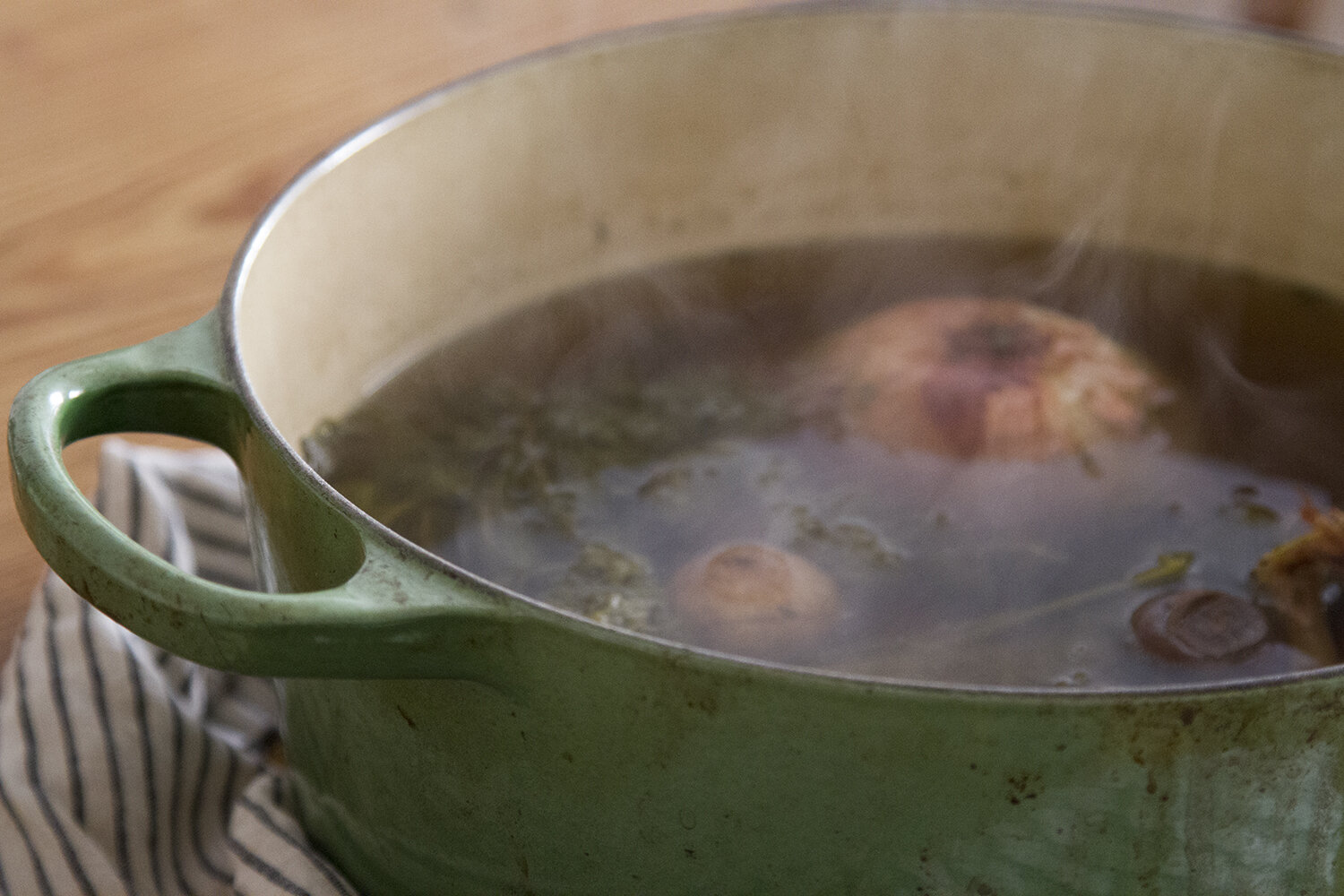 At the end of a few hours, when the vegetables were looking considerably less photogenic, I strained the broth through a fine sieve. I reserved a quart or so to use for dinner, a cupful to serve to Faye tea-party style, and poured the rest into two quart-sized mason jars to freeze for later. And that’s mostly that, but here are three more things: 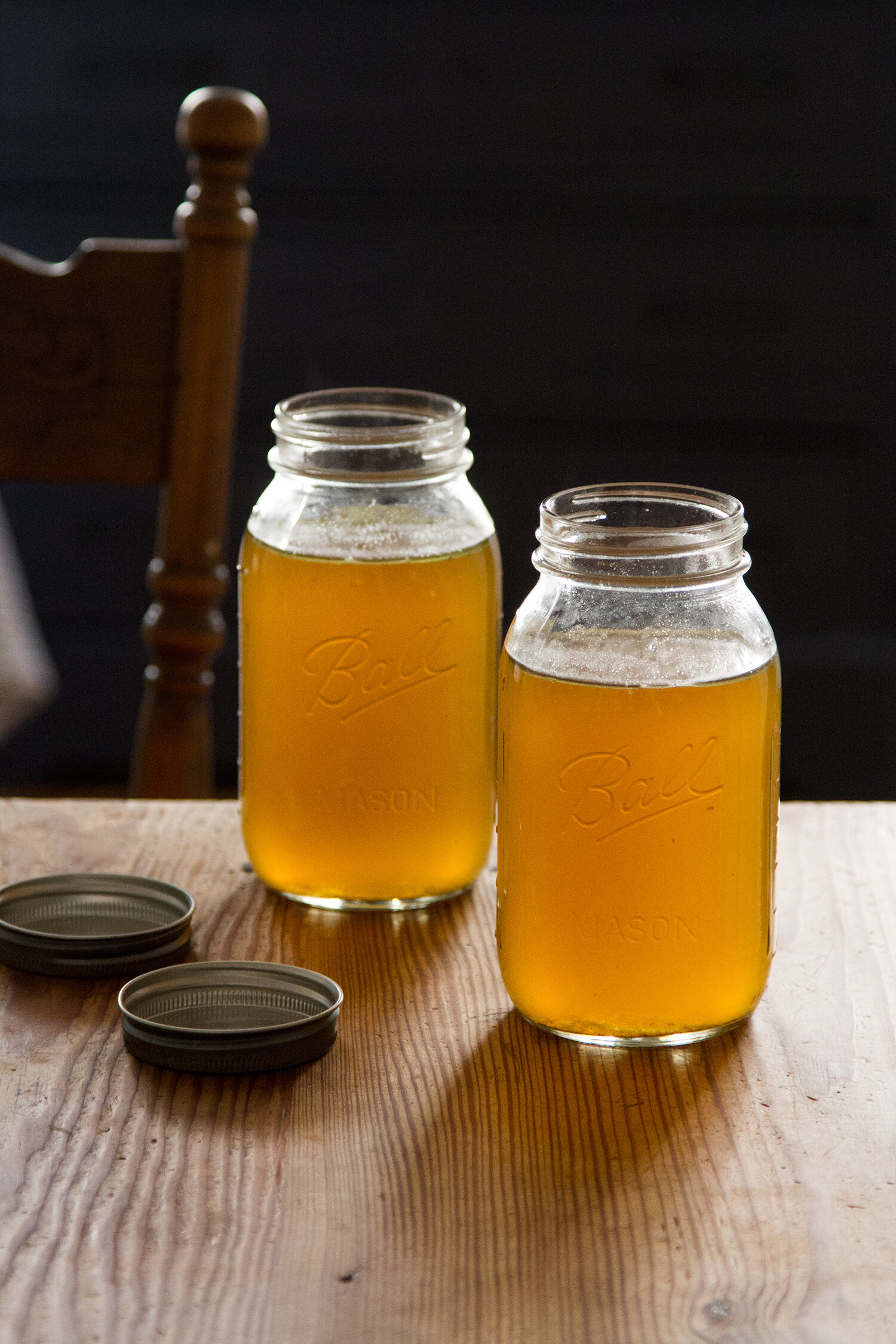 A note: If you’re freezing your broth, leave a bit of headroom in your container to allow for the broth to expand in the freezer. On the day before you plan to use the broth, let it defrost in the refrigerator overnight so it’s ready for pouring (or let it come to temperature sl-o-o-o-wly in a water bath). 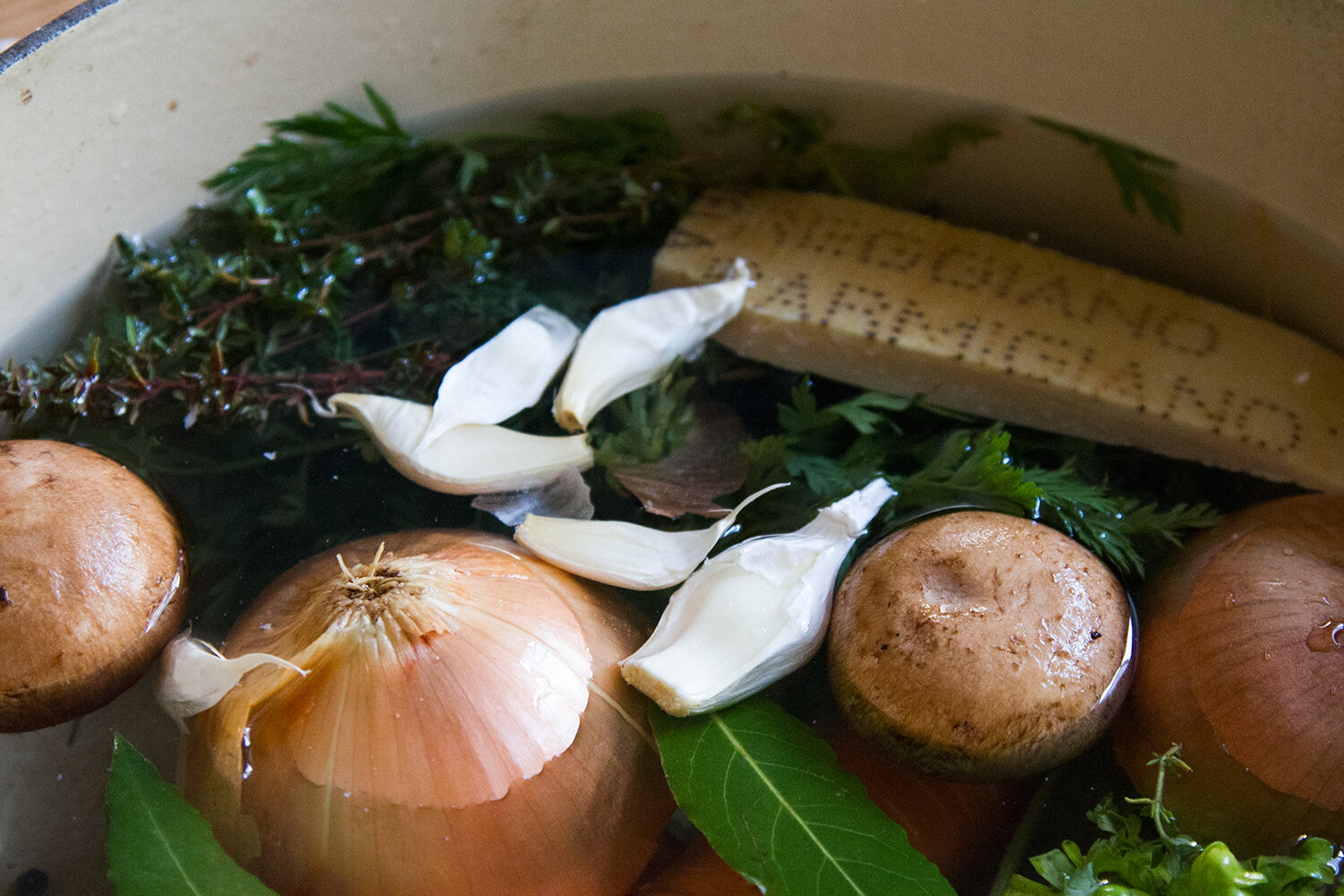 A plea: Save your parmesan rinds. We go through an enormous quantity of parmesan cheese in this household. This is partially because we eat an exorbitant amount of pasta needing a fresh shave or twenty, and partially because I’m addicted to adding the rind to just about every stew or soup or potful of dinner that I happen to be making. I store rinds in the freezer if I don’t have an immediate use for them, and I’ve certainly been known to lop the rind off the cheese as soon as I bring it home, just to get to the prized part more quickly. 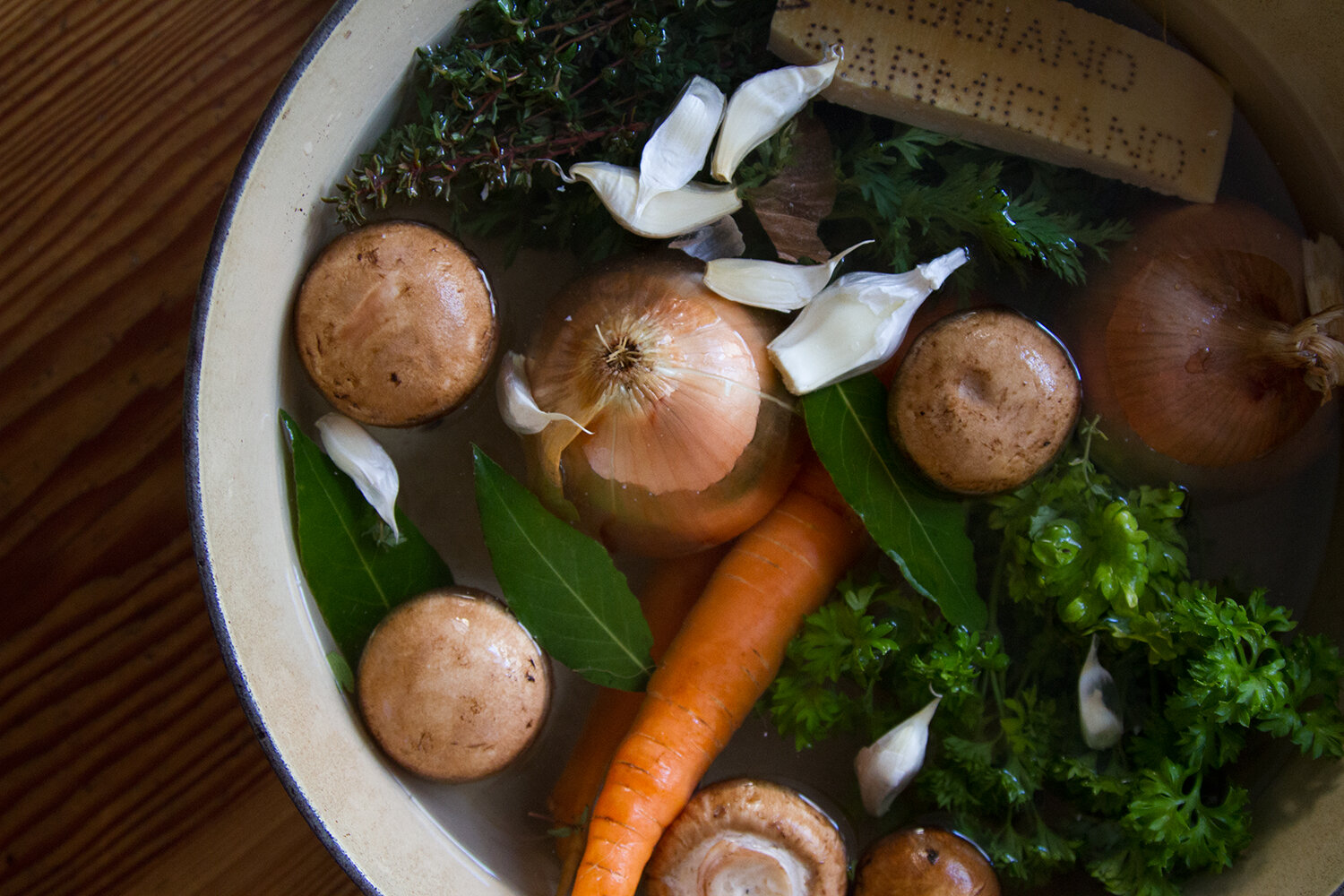 A promise: I’ve written before that we freeze our food scraps and bring them to the farmer’s market for composting, but for some reason I’ve never gotten into a good habit of putting useable food scraps aside to use for broth. I’m vowing to do better this year: separating some of the ends of onions and carrots and other tasty bits from the egg shells and coffee grounds and other nasty bits. 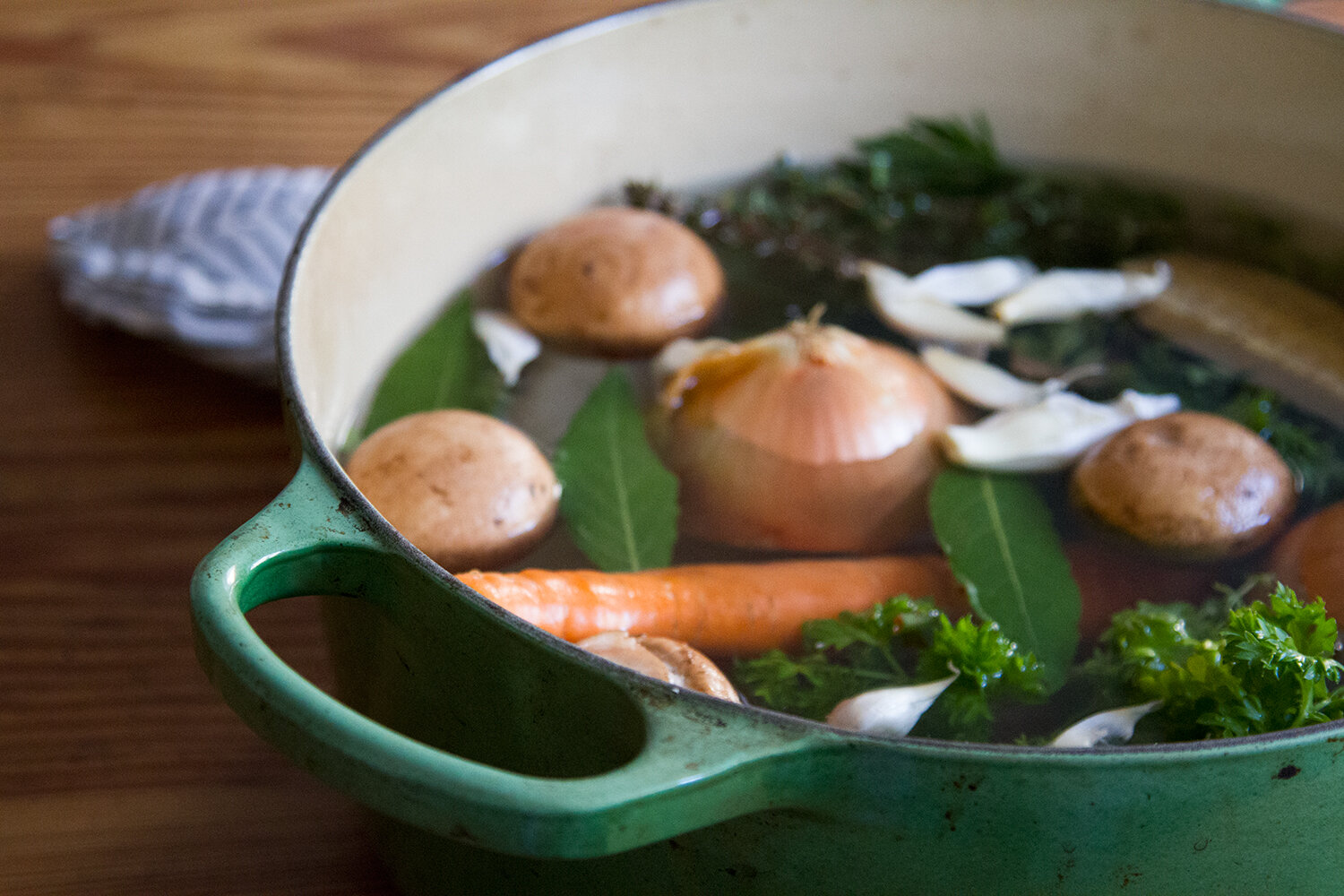 What about you guys? What have you been filling your pots with lately? Do you make your own broth? Any secret ingredients you care to divulge? 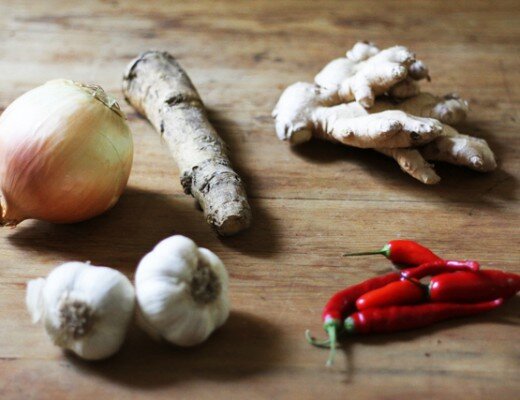 make your own fire cider. 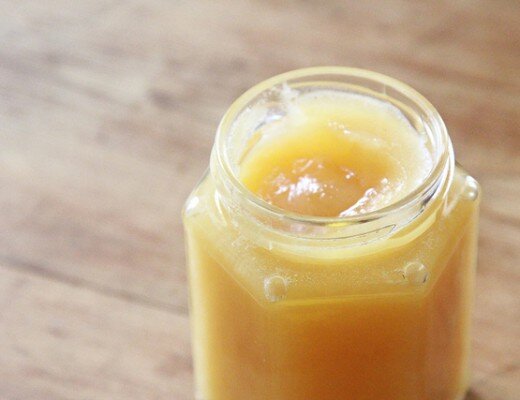 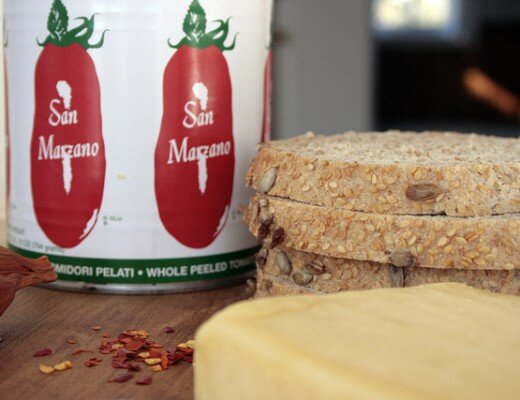