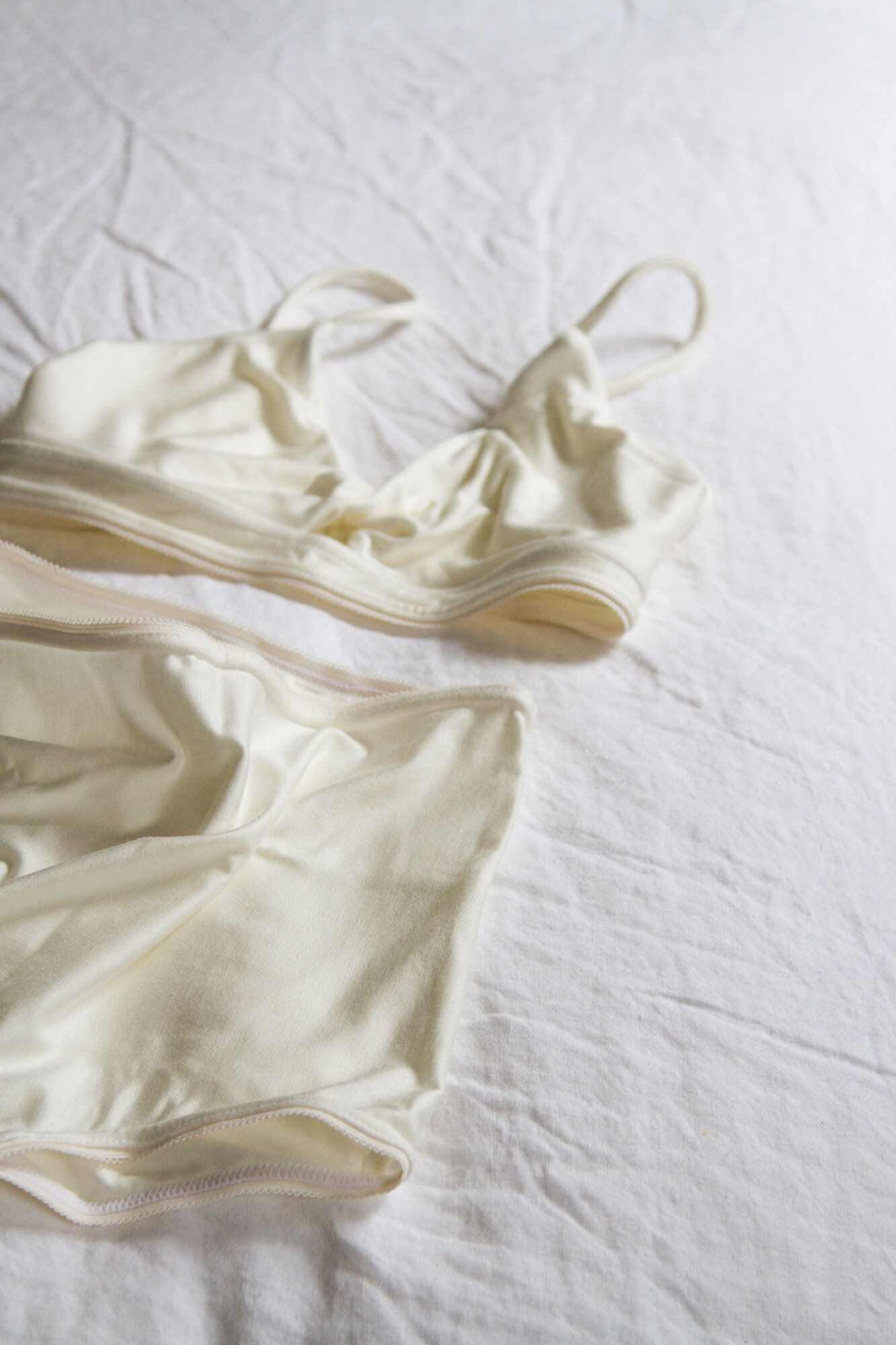 For the past three months I’ve been rolling down the stretched-out elastic on my everyday cotton underwear in hopes that the adjustment might stop them from sliding ever lower on my bum. (It does, for several minutes at least.) The underwear in question were stressed and stretched during nine months of pregnancy and still, a full year after giving birth, I haven’t bothered to replace them. 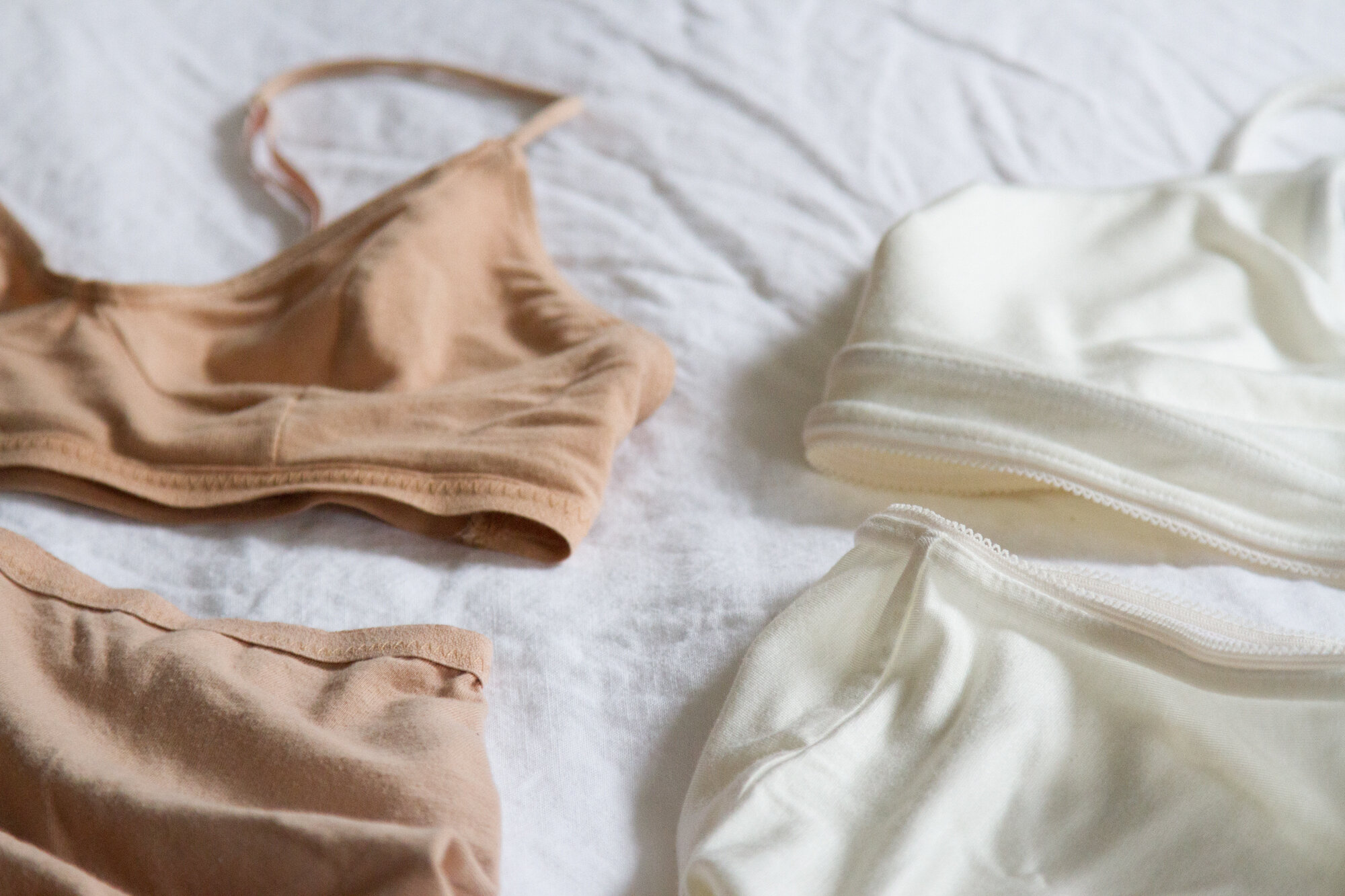 In hopes that fresh skivvies might make getting through the winter months a bit more lovely (or at least a bit more comfortable), I thought it’d be nice to give you and me an updated list of simple and sustainably made underthings. I made a list of thoughtful intimates companies two years ago, and as I did then, I’ve tried to include a range of very-lovely-but-perhaps-too-precious-for-every-day options alongside a few that are quite a bit more basic. I’ve tried my best to parse greenwashing and storytelling and find folks who are indeed doing something good for somebody or some place. Still, you’ll find nary a palm frond or fig leaf on this list and so suffice to say there’s more that goes into clothing production than most of us would care to grapple with. I’m hopeful these might offer a few folks a few options. 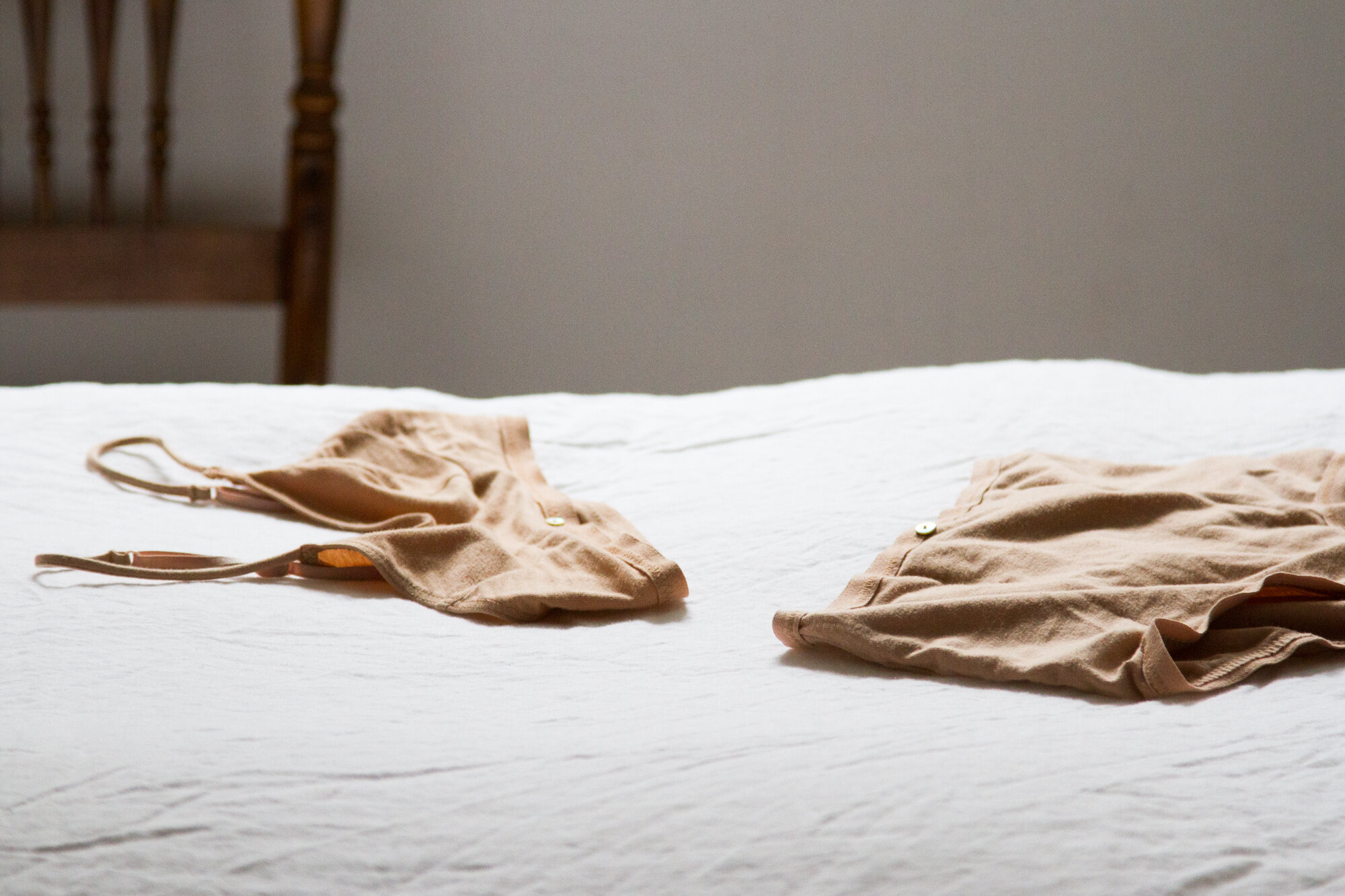 As for the favorites mentioned last go round, I stand by them. I did, indeed, stock up on PACT organic bikinis after the last post. They’ve been solid and have held up nicely, pregnancy notwithstanding. (I was surprised to realize they have a turquoise logo on the bum and sincerely wish it wasn’t there.) In a similar vein, I had some luck with basic organic cotton undies from Muji, but found them to be a bit less resilient in terms of elastic quality over the long haul. I’m very much indebted to RMTL sponsor, Storq, for making an excellent nursing bra. I’ve been living in their blush and black bras for the past year and they’re the only nursing bras I’ve ever had. (More colors are coming this spring.)

Herewith, a few others folks I’ve been admiring:

Botanica Workshop: Misa Miyagawa’s vintage-inspired bras and underwear are very lovely. I have a set of Aya Bralette and Astra Hi-Waist Brief in Petal (shown here). The bralette is delicate and lovely but sewn in just the right way to give a nice shape and solid support. The high-waisted underwear hug in just the right way. They’re both cut from thick organic cotton jersey that has held up beautifully to regular wear. The vintage mother-of-pearl buttons adorning both bra and underwear make them extra special. (PS: The bra might look delicate, but it’s a toughie: mine has withstood six months of being pulled aside and tugged on by a nursing baby.)

Everlane: Since originally publishing this piece, Everlane launched a line of basic cotton underwear (bras and bodysuits, too). They’re simple and comfortable and I’ve been wearing them for the past several months. Now available in seven colors!

Hackwith Design House: Hackwith (a longtime RMTL sponsor) launched a very lovely collection of intimates just this week and I’m lucky enough to be able to vouch for them, too. The pearl twist bralette and pearl high-waisted underwear shown here are simultaneously comfortable and sexy. I love wearing high-waisted underwear under lightweight summer dresses that fall on the sheer end of the opacity spectrum and these will be perfect. The HDH intimates collection is cut from American-made modal fabric that’s as buttery soft as they claim. You won’t find underwire on these designs, but thoughtful design and stretchy modal means they feel supportive without being restrictive.

Hesta Organic: Hesta sells GOTS-certified “period panties” (more on that subject here) and regular old sets of organic cotton underwear. Nothing fancy about these guys, but they come in a wide range of sizes and look like they’d make a great staple for day-to-day wear. Sold in packs of three, they’re also an organic option that won’t break the bank.

Land of Women: Land of Women nail elegant, minimalist design. I’m still on the fence about their Italian Supersoft fabric—a blend of Polyamide and Elastane—but if you’re hoping for something a bit more luxe than cotton, it might be just right for you. (One real bonus: it’s swim-friendly!). They also have lace and mesh designs and a simple nursing bra.

Lonely: These lacy beauties might tempt even the most staunch underwear-minimalist. (Just ask me.) The New Zealand-based Lonely makes their bras in sizes designed to fit the diversity of female bodies. They make bralettes for petite women and bralette-like bras complete with underwires to give extra support for those who need it. Available in sizes A-F.

Nude: The beautiful color palette of these Spanish-made cotton underthings might finally convince me to add a bit of color to my underwear collection. Unadorned and simple bras, underwear, and bodysuits are made from a choice of conventional or organic cotton. Bras come with an option for adjustable thick or thin straps depending on the kind of support you might need.

OrganicBasics: As the name implies, these guys are making very basic, GOTS and Oeko-Tex-certified organic cotton basics. I haven’t tried them myself, but they look like a solid option for filling your drawer with everyday options.

Sloane and Tate: Women-owned Sloan and Tate make men-inspired underwear, for women: think thick elastic waistbands. All Sloane and Tate products are produced in women-run factories in LA. They donate new underwear to The Good Shepherd, a domestic violence shelter for women in LA.

Tomboy X: Tomboy X makes bras and underwear designed to fit all bodies comfortably, no matter where you might fall on the size or gender spectrum. They focus on gender-neutral styles and stock sizes XS-4X. Tomboy X products are produced in women-owned factories domestically and abroad where workers are paid living wages. If you’re hoping to stock up, they offer 10% off three pairs of underwear and 15% off seven pairs. 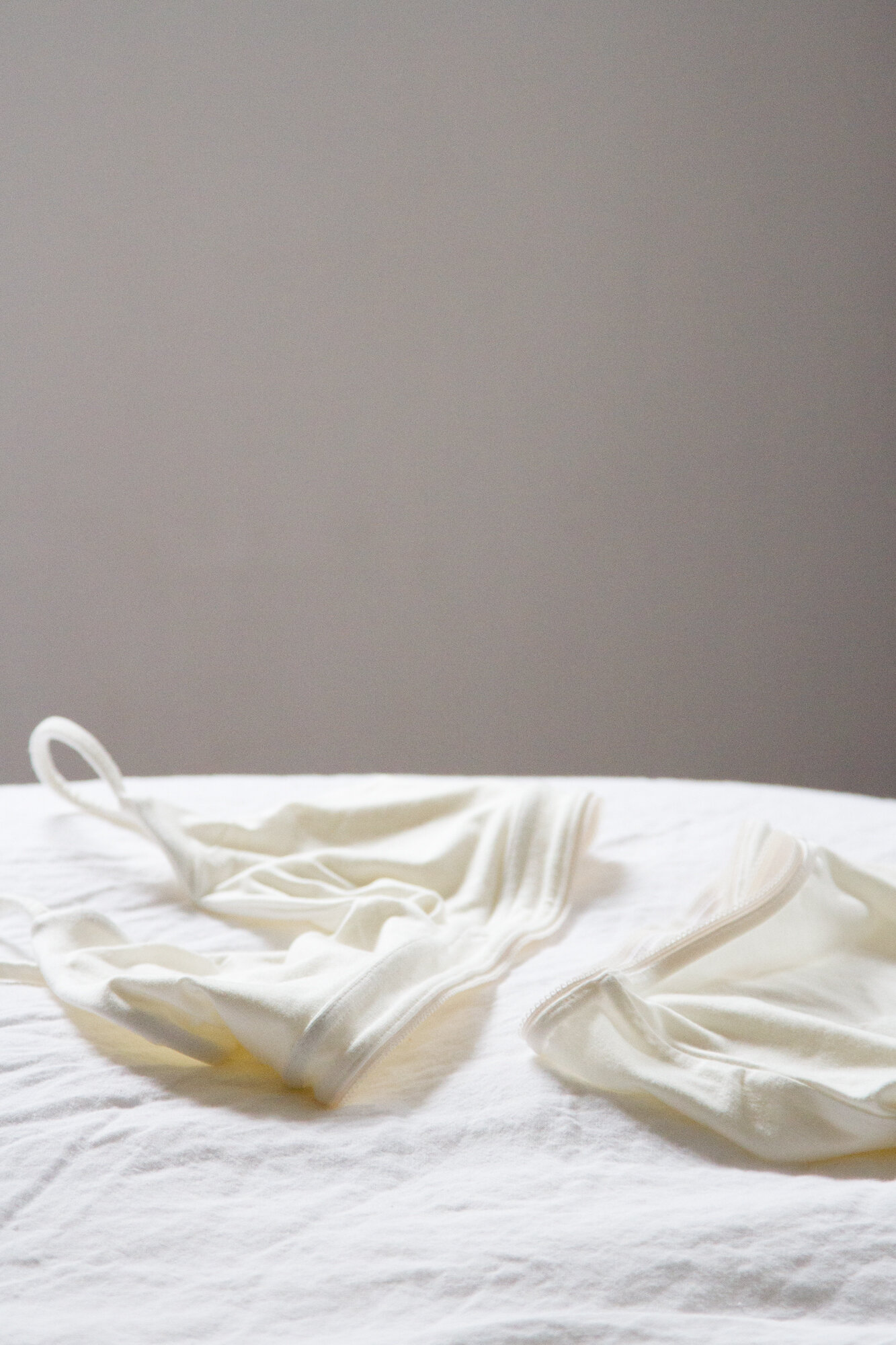 Many thanks to Anna Jacobs for contributing editorial research for this post and to Botanica Workshop, Hackwith Design, and Storq for letting me test-drive your ‘wears. 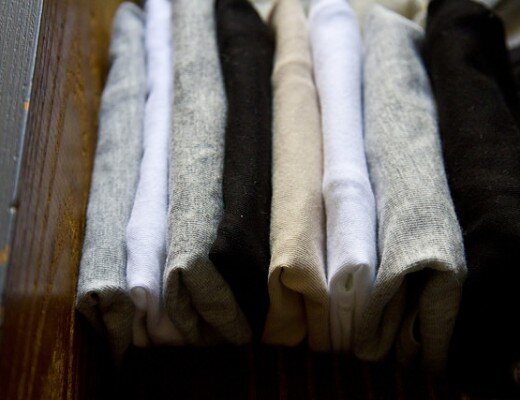 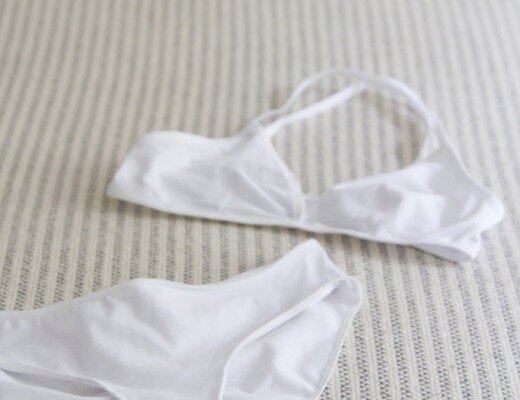 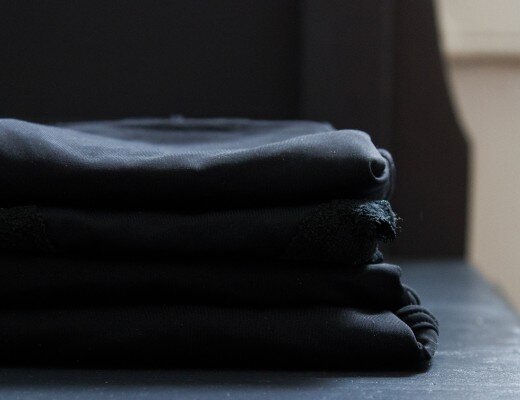 life in a less tiny apartment... // photos by robe

preparing for holidays without the company of exte

not enough lemon balm in the world, if i’m being

the trees have hearts. (and there’s a new make-b

“parents should have a plan.”

more leaves on the sidewalks than the trees these