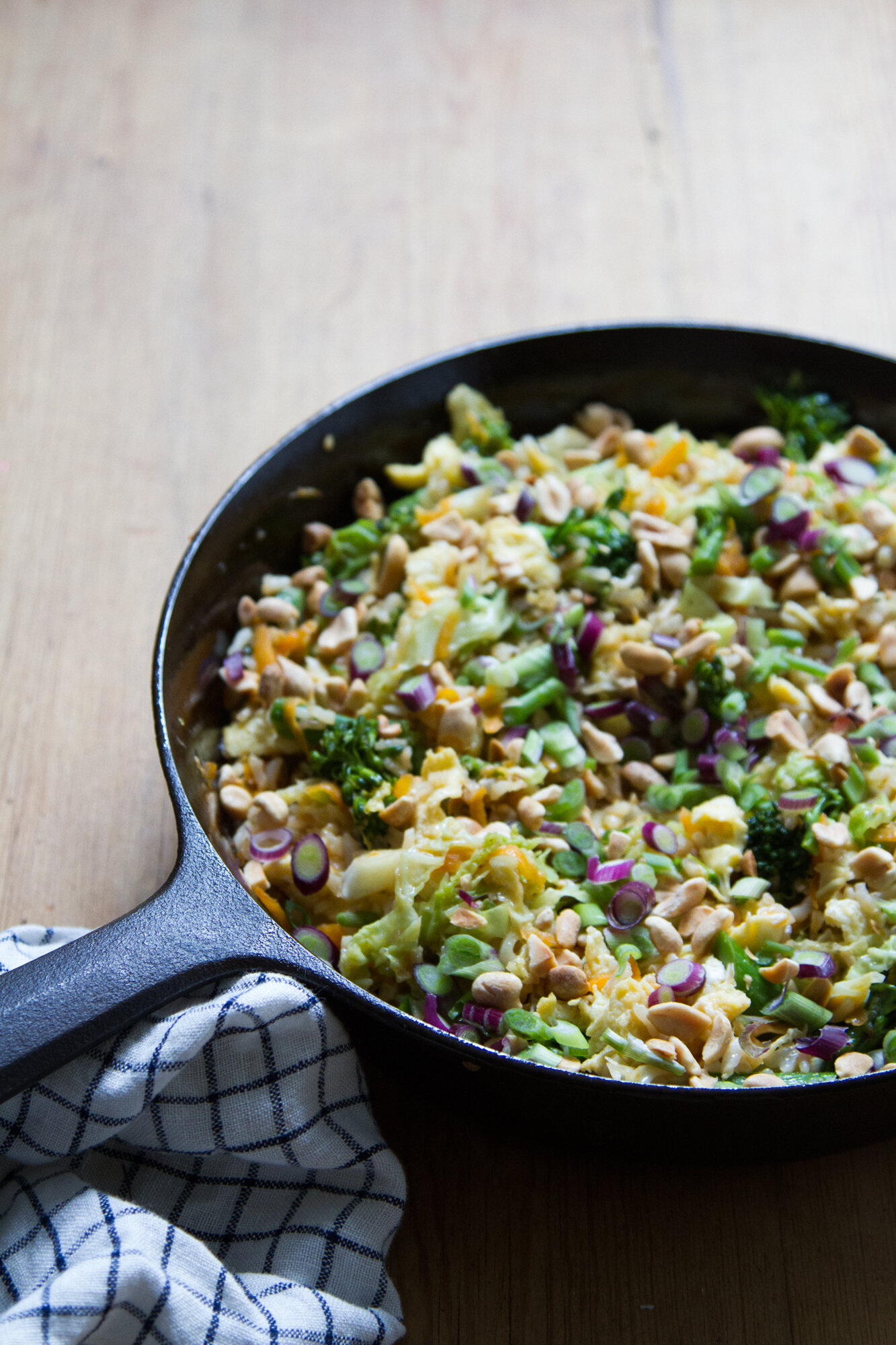 Fried rice was the very first recipe that Carrie suggested making for this series. I was scared. I’ve attempted more at-home fried rice dishes than I’m willing to enumerate and every single time, the rice and egg turned into a mushy mess that stuck to the bottom of my pan. I love fried rice and I wanted to love making it at home, but I could never get it quite right. Carrie to the rescue. This recipe is quick and easy and, dare I say, foolproof. Most important, it’s delicious and it puts my favorite kitchen workhorse—my beloved cast iron skillet—to excellent use. 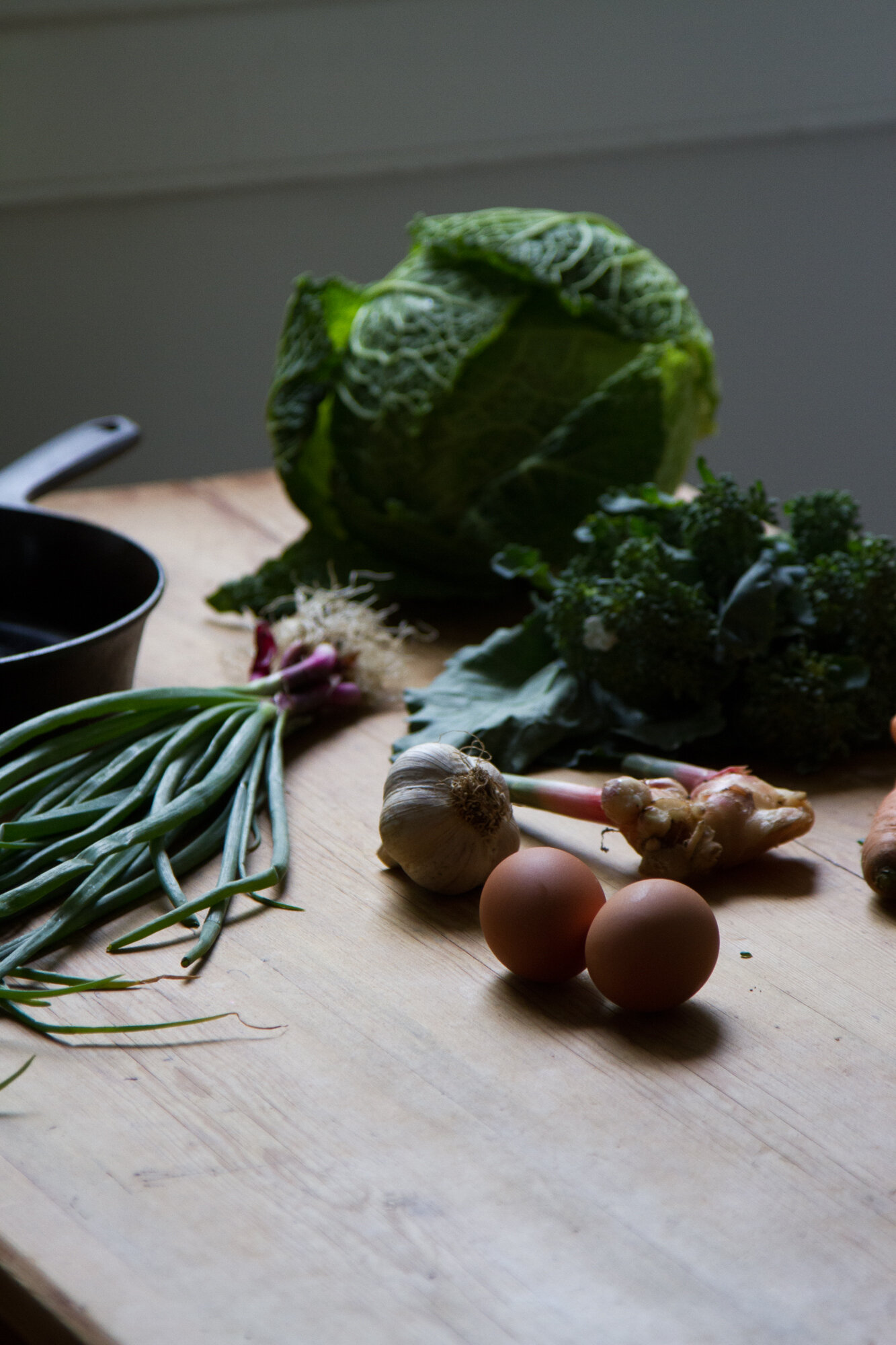 I go out of my way to make sure I have leftover rice in my fridge. When I cook rice, I often make a double batch so I can have some on hand for fried rice. My kids love it. It’s quick and a great way to use up other random veggies and meat left in your fridge. I know that many people believe that leftover rice is a high risk for food poisoning. It’s true that all food, when left to sit at in-between temperatures can accumulate bacteria that leads to food poisoning. Rice can be particularly prone to that. But I have been using and reheating leftover rice for as long as I can remember, and have never had an issue. I even use boxes of leftover rice from takeout orders! I can’t bring myself to throw out perfectly good rice. And, the truth is that I find leftover rice makes for a better stir-fry because it’s drier from the fridge air. The more moist rice is, the more it will stick to your skillet. So, if you’re not comfortable with the idea of using leftover rice, by all means make fresh rice to make this, but just know that it might stick a bit more. 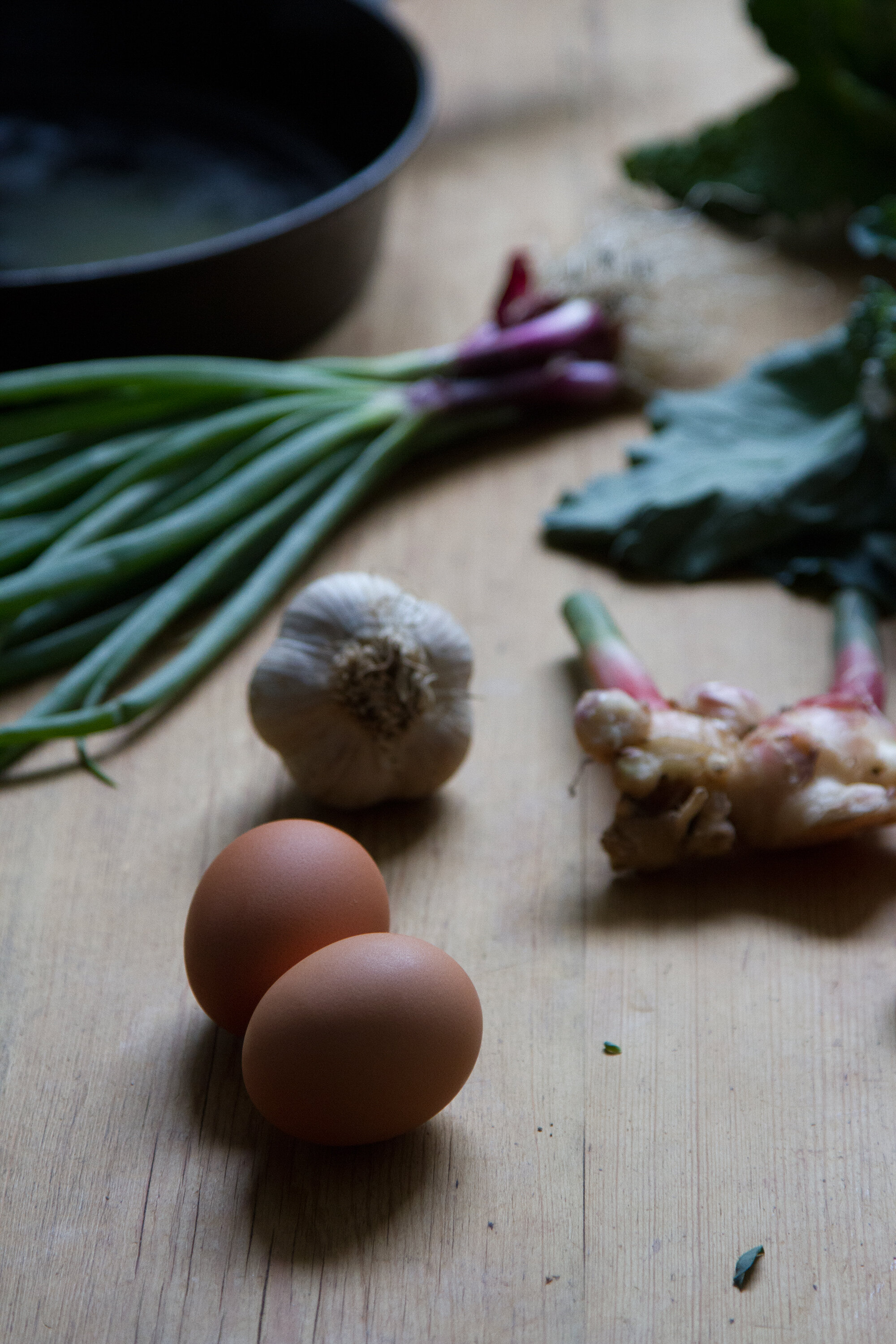 For a time I worked in an Asian restaurant that focused mainly on quick, but delicious, rice and noodle dishes. I spent a lot of my time on the line working the woks. These woks weren’t set over the dinky gas flames of a typical range. They were set on big, open rings of fire, so the bottom, narrowest part of the woks would sit in, and the flames would lick up as high as the top edge (and if you weren’t careful, your fingers). These light, simple, stainless steel woks were perfectly seasoned, we never scrubbed them with soap and water for fear we would mess with the natural nonstick qualities they had built up over time. All we would do at the end of a service was just boil water in them on a very, very high temperature and then wipe them out with clean cloths.

For someone whose life and work revolves so heavily around food, I have a pretty crappy oven. It’s not that powerful. It’s got nothing on the BTUs that explode from the ranges in pro kitchens, nevermind the kind of heat that came from those wok rings. So, at home, when I want a hard sear or some quick, strong heat, I always use my cast iron skillets. And the name of the game for a successful stir-fry is hot and heavy for a short period of time. If the skillet isn’t hot enough, the veggies will boil and water will build in the skillet, the enemy of a flavorful stir-fry. Since my range isn’t powerful enough, I need the cast-iron to build and hold the heat. Sadly, woks just don’t cut it for me on my home stovetop. 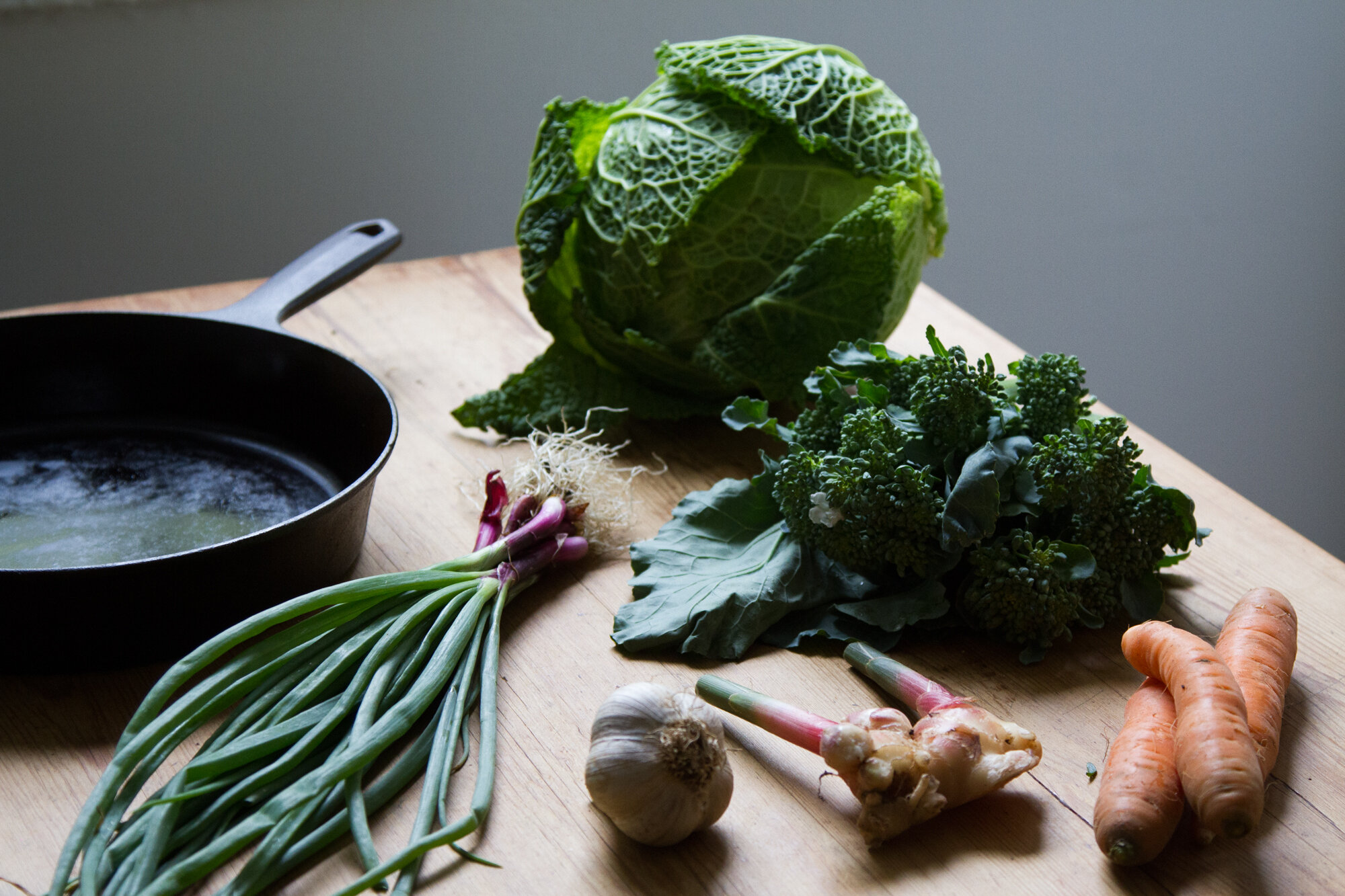 Aside from fast and furious cooking, successful stir-fries also rely on a nonstick cooking surface. I am pretty adverse to all Teflon and other artificial coatings that render cookware nonstick. This is another reason why I love my cast-iron for stir-frying – like the woks in that restaurant, after lots of careful upkeep and seasoning, they have become naturally nonstick. I never use soap to clean them. I wipe them out with a slightly dampened sponge or scrub brush or dry cloth, depending on what I’ve cooked in there. The odd time where I get some hard-to-clean bits (usually stuck on the sides) I boil water in it soften up, and then get to scrubbing and re-oiling. 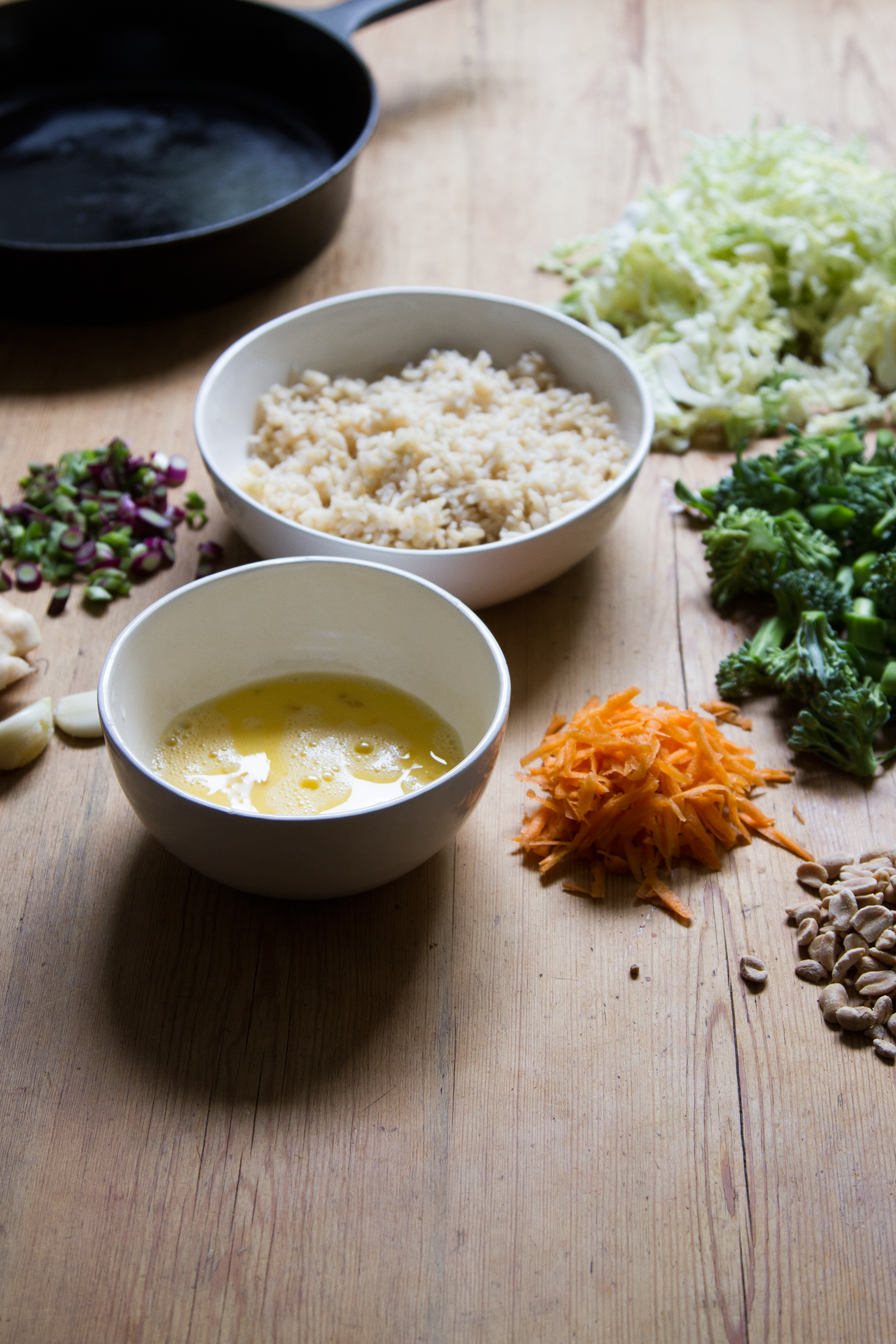 There is one thing that I miss about my beloved restaurant woks: The thin stainless steel was so light! So we could vigorously rock the woks backs and forth over the flames, helping spread the ingredients out to take advantage of the hot surface area. Alas, my cast iron, while also beloved, is HEAVY. So, instead of quickly moving the skillet back and forth, I use a spoon or spatula to quickly move the food around – leaving it alone just enough to let it cook, but not long enough to let it bring down the surface temperature and boil. 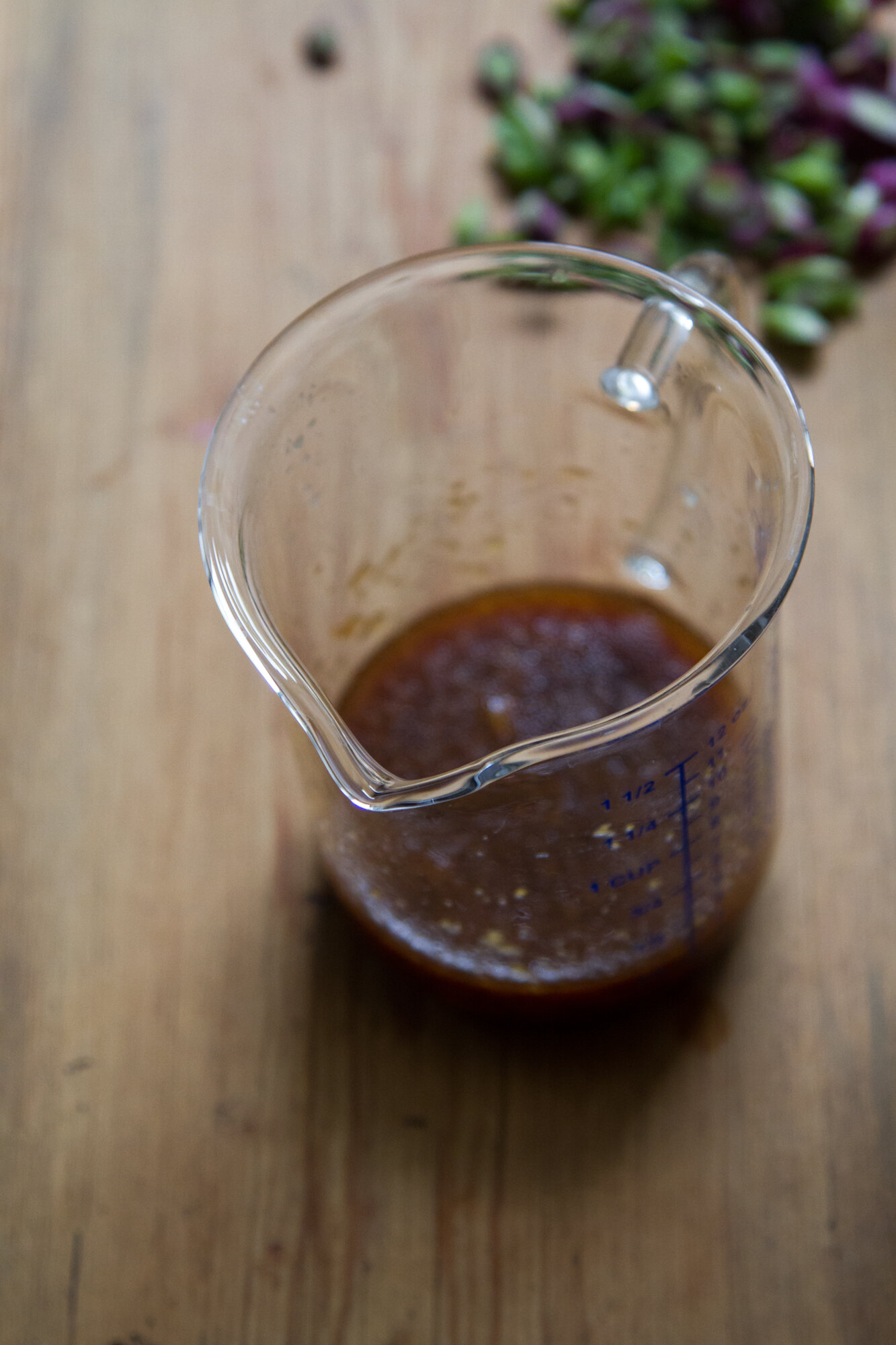 1 Tbsp mirin or other rice vinegar/p>

8-12 oz broccoli, cut into small florets (don’t forget – if you peel the stems you can cut them up and use them here! Broccoli stems are delicious!) 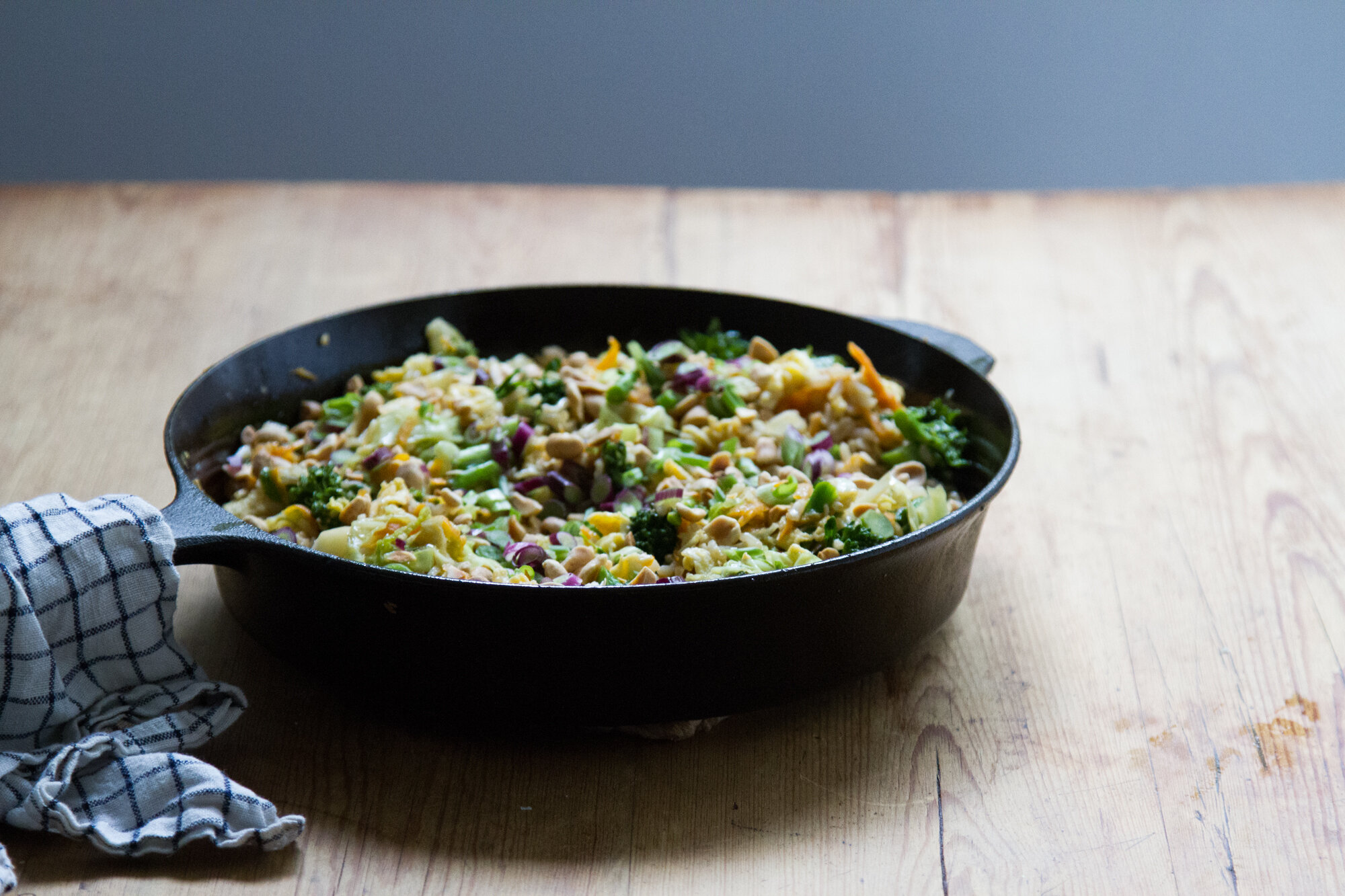 In a small bowl, combine the tamari, mirin/rice vinegar, sesame oil, and sugar. Finely grate the garlic and ginger directly into the bowl. Whisk until the sugar dissolves. Set aside.

Beat the eggs in a small bowl.

Heat 1 Tbsp of the oil in a large cast-iron skillet over high until shimmering, add the eggs, and scramble them, just 1-2 minutes, or until no longer wet, but still a little runny. Transfer them to a large, clean bowl. Wipe out skillet with a cloth.

Heat 1 Tbsp oil in same skillet over medium-high until shimmering. Add carrots, broccoli, cabbage, and ½ cup water. Cover and steam for 2-3 minutes, until water is evaporated and veggies are al dente and beginning to brown.

Stir the tamari-ginger mixture and add 2 Tbsp of it to the veggies. Stir the veggies to coat in sauce, cook another minute or two.

Transfer veggies to bowl with eggs.

Add the remaining tamari-ginger mixture. Stir to combine. Cook 1-2 minutes more to let it all absorb.

Add the eggs and veggies back to the rice, scraping any sauce and juices from the bowl into the stir-fry.

Cook, another 1-2 minutes, until all is combined.

Taste and season with salt if necessary.

Serve with sliced scallions and chopped nuts on top. 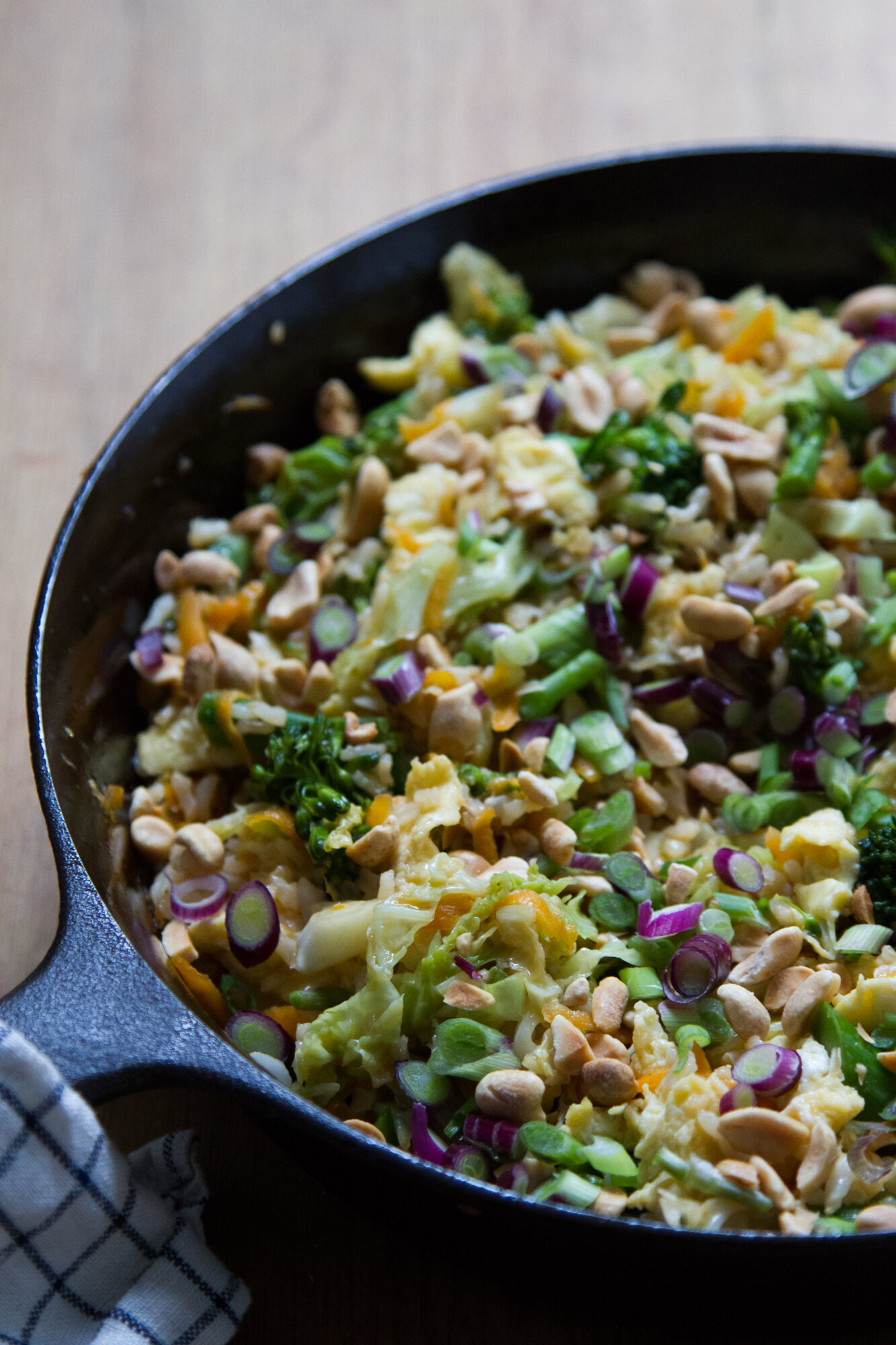 If you eat meat and have leftover chicken, pork, or salmon from another night, shred it up and add it here!

This presumes your cast iron skillet is seasoned and nonstick. If you have a trusty wok and prefer to use – go ahead! Or other nonstick skillets might work if they are heavy duty and the heat is high enough.

Always in cooking, but particularly with stir-fries that need to come together quickly, it’s important to have all of your prep done first and ready to hit the hot skillet!

The veggies can change seasonally or depending on what you have on hand! You can use shiitake or cremini mushrooms, leave out the cabbage, add peas, baby corn, bean sprouts, bell peppers – whatever you want!

Sometimes I rice broccoli or cauliflower into my fried rice dishes to bulk it out and sneak more veggies into my kids! If you do this, add at the same step as veggies.

You can also omit the egg step completely to make this vegan!

Add 1 Tbsp of gochujang or chili paste to the sauce to make this spicy.

+ Our cast iron skillet is from The Field Company. (And at the risk of bragging, one of my very favorite things about it is that it’s so much lighter than other cast iron pans that I’ve used. It’s not wok-light, but you won’t break your wrist trying to move it, either.

+ Our checked napkin is the Jenn Napkin from Fog Linen. 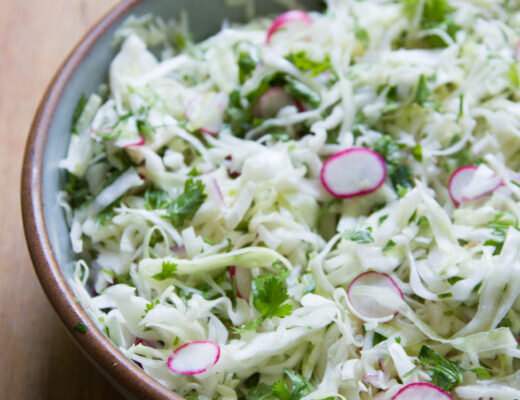 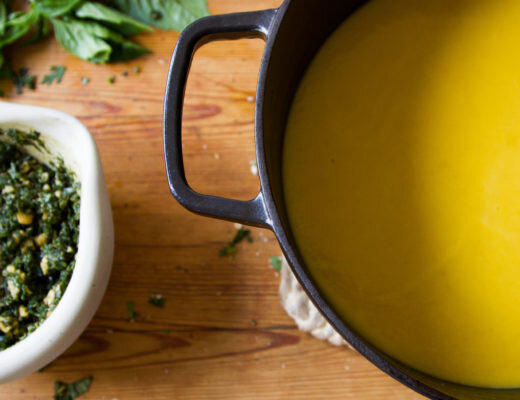 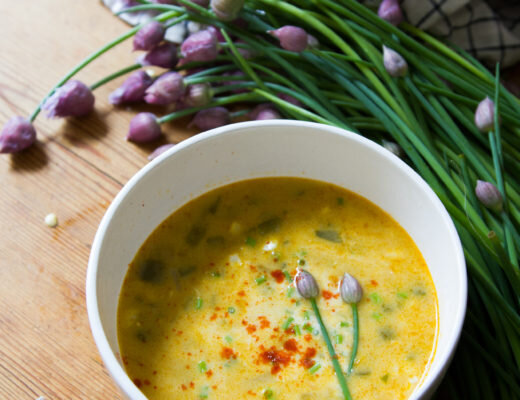