Some of you might recall that we have a very pink, very vintage bathroom that we mostly have left well enough alone. Earlier this year though, I made one small change that’s made a pretty huge difference in the small space. I replaced our damaged plastic shower curtain with a linen-only curtain made to fit for our vintage tub that needs an l-shaped curtain.

I do not regret it. I would absolutely do it again.

The linen curtain is airy and lovely and bright. It doesn’t send a flood of water to the bathroom floor as I feared it might and it dries extremely quickly between showers. Maybe best of all, because it’s light and flexible compared to a plastic liner, it can be easily tied together and pushed to the side during raucous bath times involving three children and one parent in a tiny bathrooom. I have no idea if a cloth shower curtain might be a small improvement for you (and hopefully it won’t be a small disaster) but for me, the switch has been easy and wonderful.

Here are a few things to know:

+ We went with a linen shower curtain because I was able to order it in a custom size to fit our space and because I felt like the linen would be quickest to dry in very small bathroom that doesn’t have a window! Other options for cloth-only are cotton canvas and hemp!

+ When ordering our linen shower curtain I intentionally measured for a curtain that would be relatively taut and not too long, in part because I didn’t want an overly flouncy looking curtain, but more so because I didn’t want a lot of extra fabric to get wet or to get in the way in a cramped bathroom. I regret slightly that I didn’t allow a bit more room for shrinkage. I paid a small extra fee to have the fabric pre-washed through the Etsy shop that made it, but even so, when I washed and dried it on low temp, it shrunk a bit more than I expected. It’s not drastic and nothing I can’t live with, but I’d say the size was perfect before I washed it and ever so slightly less perfect now. If you care about these things, let my experience be a lesson and order a smidge larger than you need, even if you buy it pre-washed.

+ We keep our shower curtain outside of the tub while we shower (and typically tuck it back into the tub once it’s dry). Yes, this is contrary to what I’ve done my whole life and yes I thought this might produce a waterfall effect outside the tub, but unlike a plastic shower curtain, the cloth curtain absorbs any water that hits it and frankly, not much water does. (Even after an especially indulgent shower, there’s never so much water saturating the curtain that we need to wring water out of it.)

+ Our shower head is somewhat unusually placed on the long stretch of tub wall instead of at the head of the shower. When we moved in, we replaced a plastic hand-held shower head with a simpler rain shower. This shower head means less outward spray and more downward spray (and no hose knocking us in the back of the head while we try to shower). The jury’s out on whether this change also makes the cloth-only curtain easier from a saturation perspective, but I’d hazard the guess that particulars of shower head placement, water stream, tub-size, shower habits, etc. all play a role in how the experience might go. These aren’t things I personally obsessed over, but they might be worth a moment of consideration should you decide to go this route.

+ When I first mentioned making the switch to a cloth-only shower curtain, I received a flurry of inquiries regarding mold and mildew and other streaks of black or pink that might require cleaning. I’ll say that we have had our cloth-only curtain hanging for a few months now and that it is doing beautifully. Plastic shower curtains get dirty too, as we all know, and this one is so much easier to take down and wash with a good oxygen brightener if need-be. (Our last plastic curtain needed to be replaced after we washed it at the laundromat and it was badly damaged in a too-small machine.) That said, we do try to do all the things that mitigate cleaning issues cropping up in the first place—leaving the bathroom door open after showering, running the ceiling fan, stretching the curtain out to dry, et cetera. (These steps feel onerous in writing, but are second-nature in practice.)

Success with a cloth-only curtain no doubt comes down to some specifics, but for us, it’s been a totally seamless and very lovely small improvement that means less plastic, more loveliness, and easier cleaning. Win, win, win.

+ We needed a curtain of an unusual size, so I ordered a custom linen curtain through 3HLinen on Etsy.

+ In our last apartment we used a Utility Canvas Shower Curtain that I later turned into a blackout shade for Calder). I wasn’t brave enough then to use the curtain without a liner, but I would be now and they come in lots of bold colors should anyone be looking for a little jolt.

+ As you might notice in the photos above, for the past few months we’ve been using Conscia solid shampoo and conditioner stones. They’ve been incredible and as a result I don’t think our shower caddy will ever see another plastic bottle again. Cheers to a (nearly) plastic-free bathroom.

What else? Anything I missed? 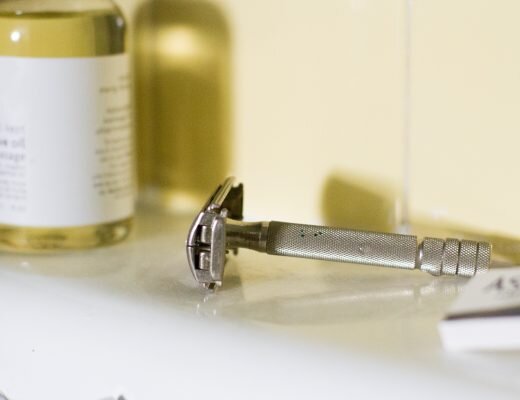 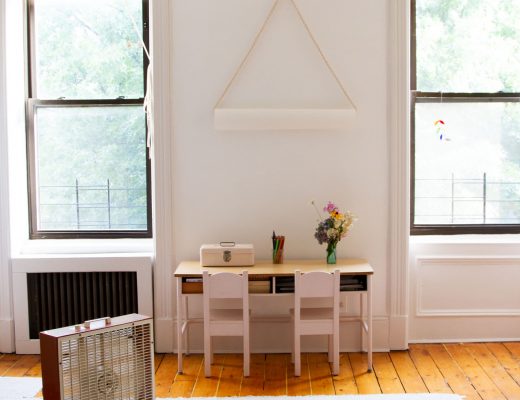 make your own: swedish roller shades. 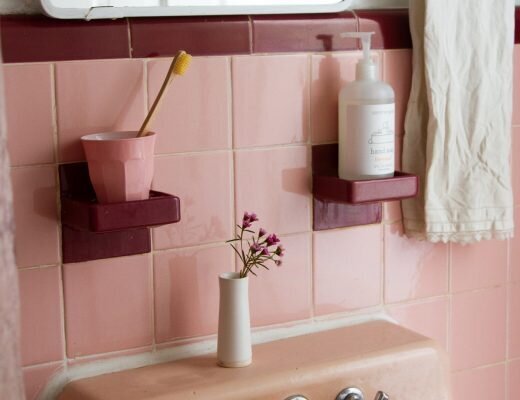