I made a dog bed for my children. This was not my intention at the onset, but it is what I ended up with and I’m not complaining. A puppy is a puppy is a puppy, human, canine, or otherwise.

A number of weeks ago, Faye and I found ourselves in the Muji Store near Astor Place. She stationed herself by the table of rubber stamps, I hunted for the elusive kraft paper sticky notes that seem to have gone the way of the Dodo. Together we sought a bit of relief in a temple of shoppable organization and order. Eventually we ventured below-deck where we found a group of twenty-somethings lounging on a bulging bean bag squished into the cement floor. There are probably two camps of people when it comes to lounging on public bean bag chairs. In one, I imagine, are folks repulsed by settling into a public petri dish. In the other, are folks unable to walk past such a squishable beacon of comfort without giving it a try. And maybe there’s a third: parents and children who have just walked half the length of Manhattan and who are willing to put misgivings aside for the chance to take a load off. It’s not every day you meet a bean bag chair in the wilds of New York City and when you do, you might as well take advantage, is the way I see it. We waited our turns and relinquished our spot only when it became awkward not to.

This brush with comfort in the form of a floor-model chair put me back on the prowl for one of our own. This has been a recurring hunt of mine. Every few months, while watching my children tumble off the sides of our very modest “couch,” I think that some kind of pouf or ottoman or otherwise furniture-adjacent spot of comfort could be nice. For small humans who enjoy lolling on the floor (or pitching themselves there), it’s reasonable to assume that a soft place to land might be welcomed. But every time I’ve gone down the rabbit hole of researching what such a place might be, I’ve been confronted with a list of options longer than my arm and fillings of dubious provenance. Most bean bag chairs are stuffed with polystyrene Israeli couscous-sized pellets that look like a looming environmental disaster for the planet, not to mention my apartment. (I recently walked three city blocks plagued by a polystyrene pellet spill, and the tiny pellets skittering across the sidewalk and sticking to everyone’s soles confirmed my hunch that the event of an exploding bean bag is not something I’d wish upon anyone.) Other options like wool or buckwheat are expensive and heavy and even the many, many Etsy shops hawking shredded foam fill (purportedly recycled) by the pound couldn’t convince me to take the plunge.

So stymied again by lackluster options, I did what I do best, which is to shunt the idea to the recesses of my brain and hope that just the right solution materializes before me. It’s not magic that sometimes makes this happen, so much as a stubborn unwillingness to compromise. And in this case, as in most cases, it was a waste problem that led to the appearance of a solution. More specifically, it was two bed pillows that were no longer sparking joy (or a good night’s sleep) for one of my children. The pillows were filled with a mix of shredded latex and kapok which looks suspiciously like those bags of shredded foam fill and so I did what any reasonable person would do and cut them open. I sewed a simple square from an old sheet and stuffed it, clumsily, with the innards of the offending pillows. Then I stitched up the side and made an envelope-style pillow case for that out of a yard and change of denim. The result is floppy kind of dog bed that my kids drag from room to room and prop against the wall while watching movies. It’s perfect enough.

PS. If making a dogbed/floorpillow from old pillows is not something you plan on doing anytime soon, here are some delightfully kooky upcycled options from my friends at State: Cloud Cushions and Scrap Cakes! And if you’re willing to make an investment, Home of Wool sells a large wool-stuffed bean bag vhair and another one in an enticing wedge-shape that might do the trick. 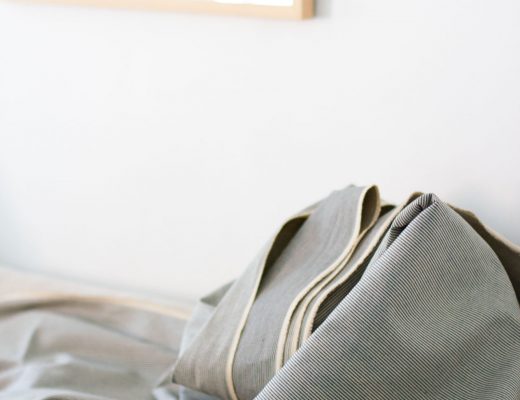 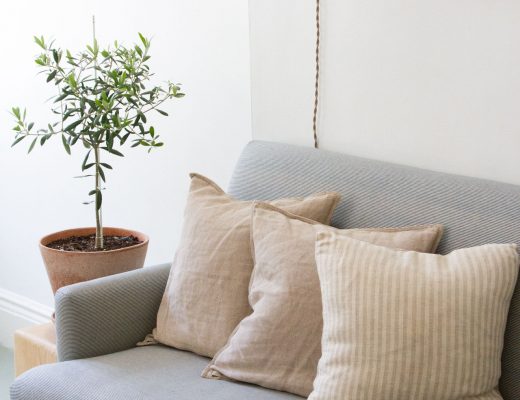 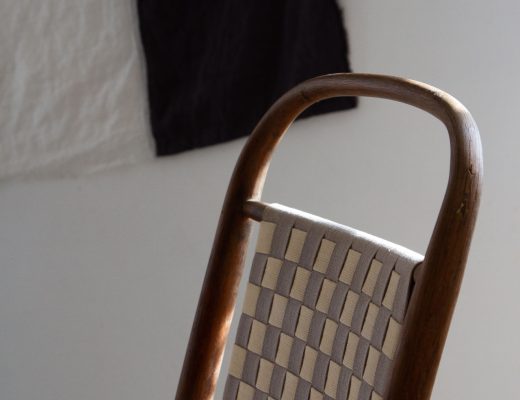 apartment progress: a place to sit.