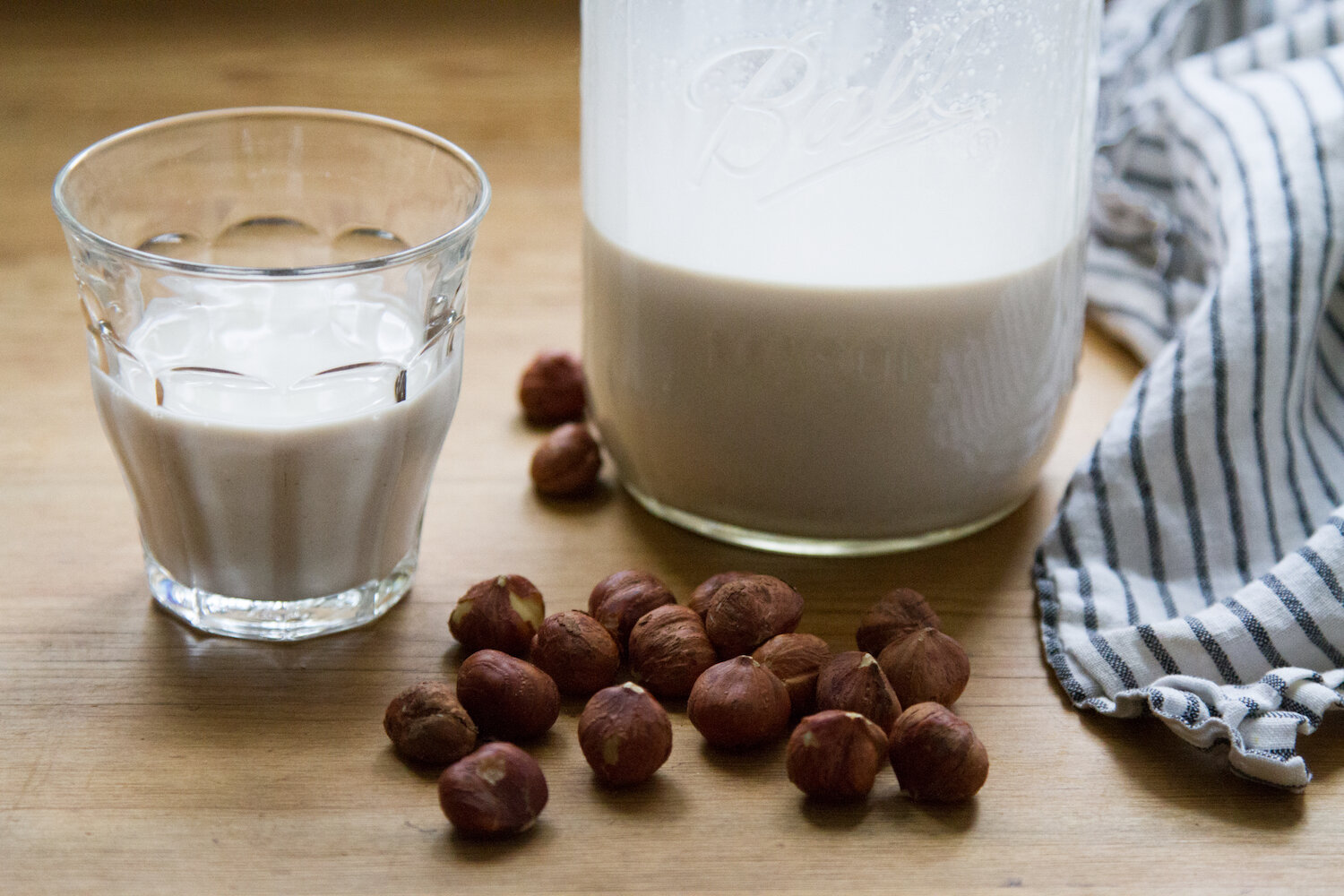 Nut milk. I don’t know me anymore, either.

Just kidding. I’m not giving up on cow’s milk. I’m just widening my perspective on milk-like things and finding another excuse to eat hazelnuts and rich, creamy treats.

Growing up in a small New England town, about the biggest thrill my friends and I had in high school was piling into a car and driving to the Cumberland Farms gas station downtown to fill up on hazelnut lattes. They were the kind of sugary confection that dribbled out of a questionably clean machine after a fitful start. “Release the button before the cup is full,” the sign read. We sometimes followed the directions and we sometimes spilled. We’d get hazelnut lattes en route to play practices. We’d scald our tongues and get hyped up on sugar and caffeine and giggle uncontrollably while we rehearsed our lines. Rebellion or something that felt like it.

I haven’t had a hazelnut latte for years—and I realize that the comparison to the gas station stuff might not be a strong selling point—but making your own hazelnut milk and drinking it with coffee is like enjoying a much, much better version of the hazelnut latte that you may have enjoyed in your own youth.

At my sister’s urging, I bought my first nut bag a few weeks ago. (I know.) And since then I’ve experimented with making milk from my one true love: hazelnuts. Making your own nut milk is super easy and super satisfying, which, you know, are my two requirements for all things DIY.

Here’s the process for making the richest, creamiest nut milk out there: 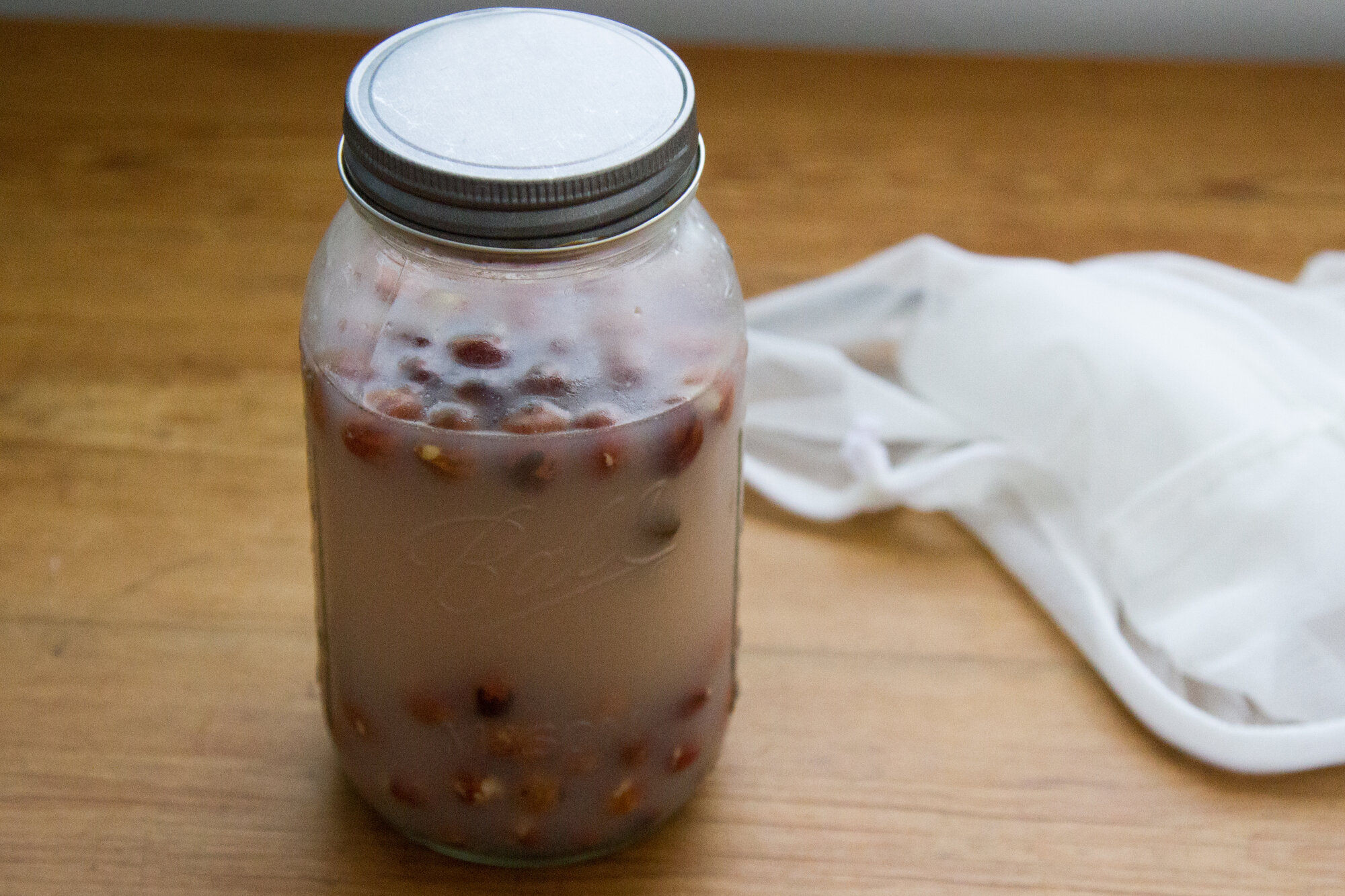 I’ve been making fairly small batches of hazelnut milk, so I’ve been using a quart mason jar to soak my nuts in a ratio of 1 to 3, nuts to water. I’ve added a spoonful of honey and an inch or so (even more when I’m feeling flush) of vanilla bean to my nuts for good measure. I haven’t set a timer, but I’ve typically been doing an overnight soak, covering my nuts with water at night after dinner and blending in the morning before breakfast. 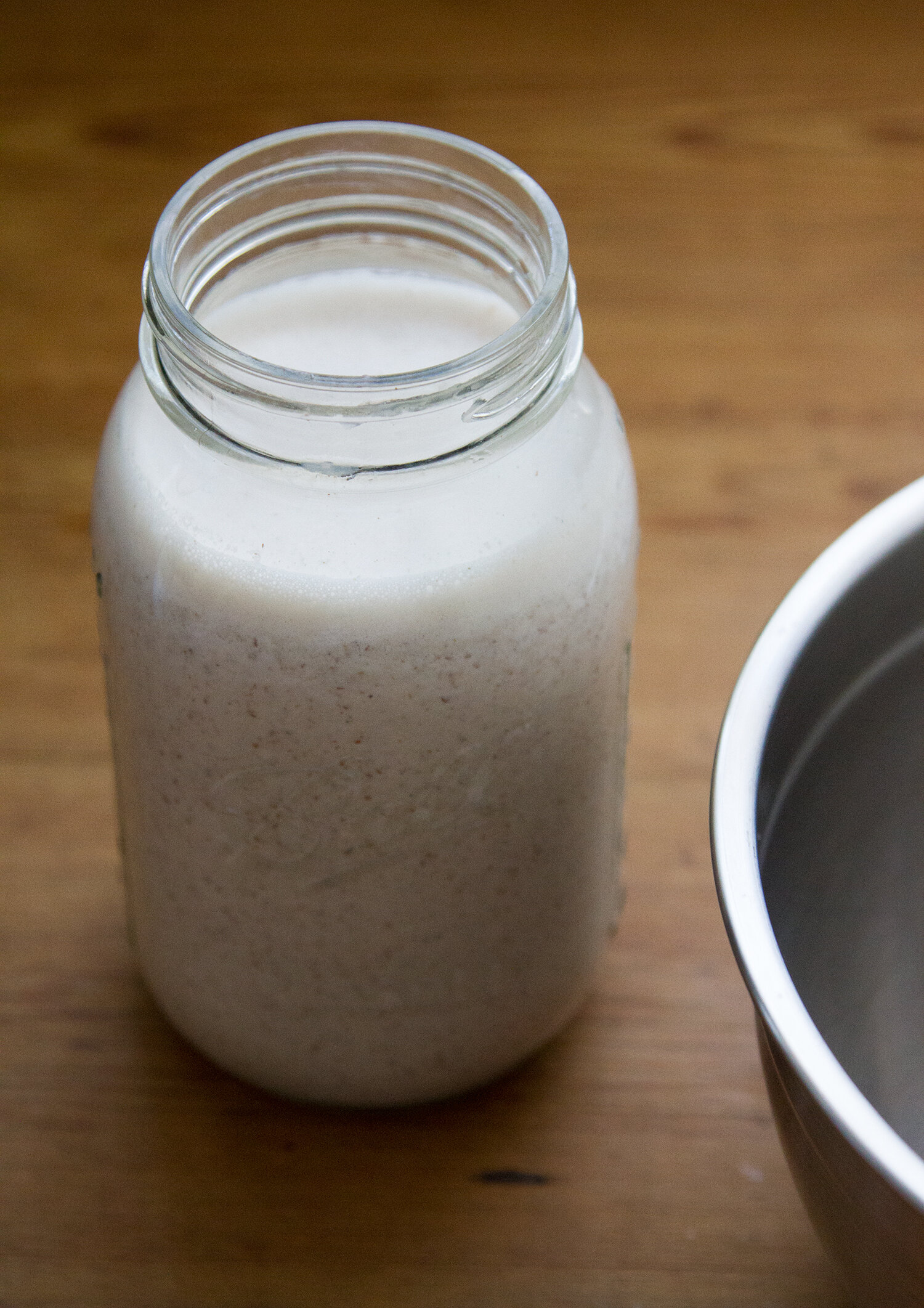 After soaking the nuts—which will be puffed a bit and their skins loosened—you blend them. (If you want a less earthy taste, soak first without vanilla or sweetener, rinse and pour off the loosened skins, and blend with fresh water, sweetener, and vanilla. I don’t do this step.) Use an electric blender on high until everything is well combined. 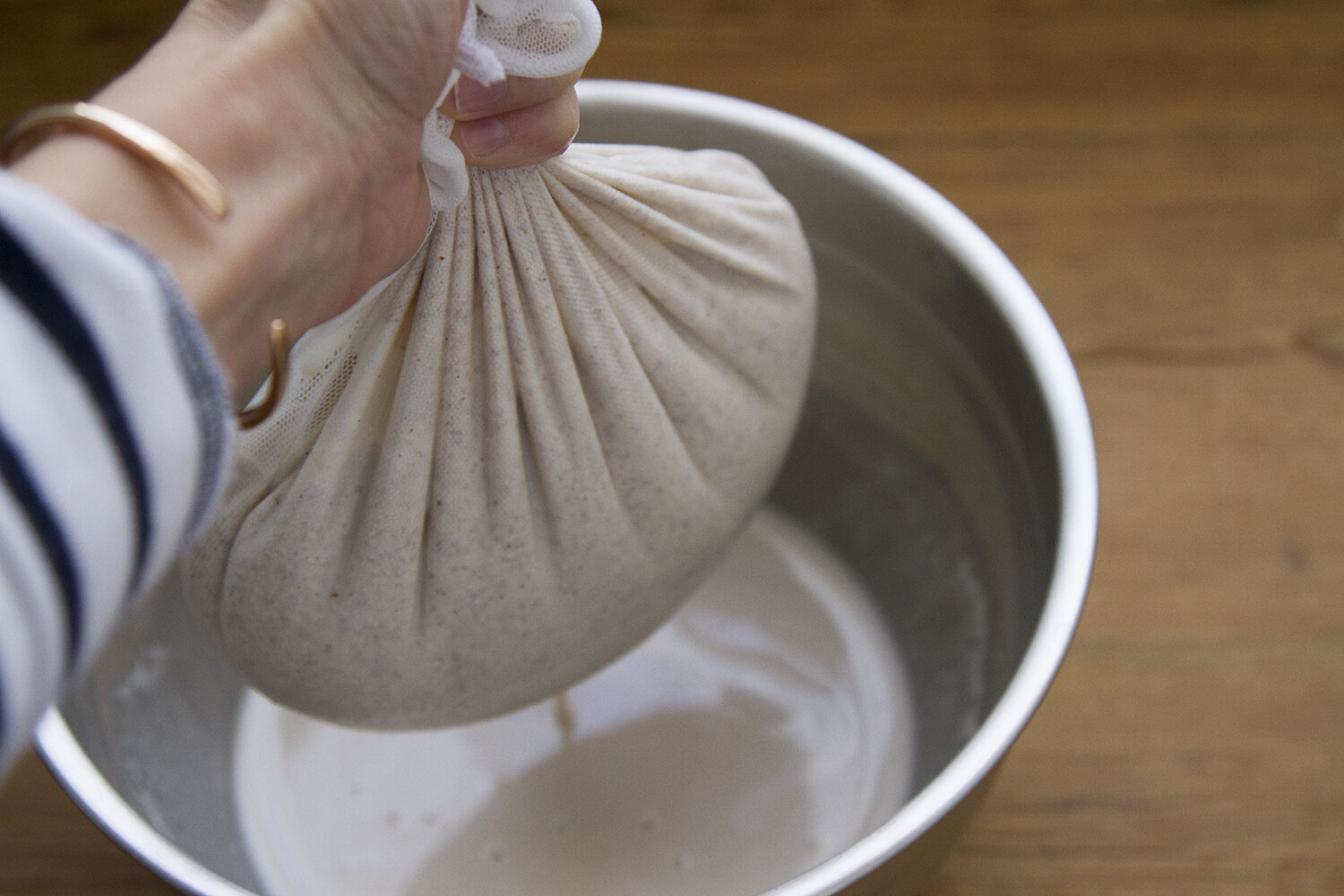 Next, you strain. Or, as I like to say, you milk. If you’ve never milked a mammal, this might be the closet you’ll get. (I’m just guessing here.) Put your nut bag over a bowl, pour in the nut mixture and lift up the bag to allow it to drain. Gently squeeze and knead the bag to encourage the rest of the liquid out. (If you don’t have a nut bag, you can use cheesecloth. It works just as well it’s just not as easily reused.) (You can compost the nut meal that remains, or dry and save it to use in baked goods!) 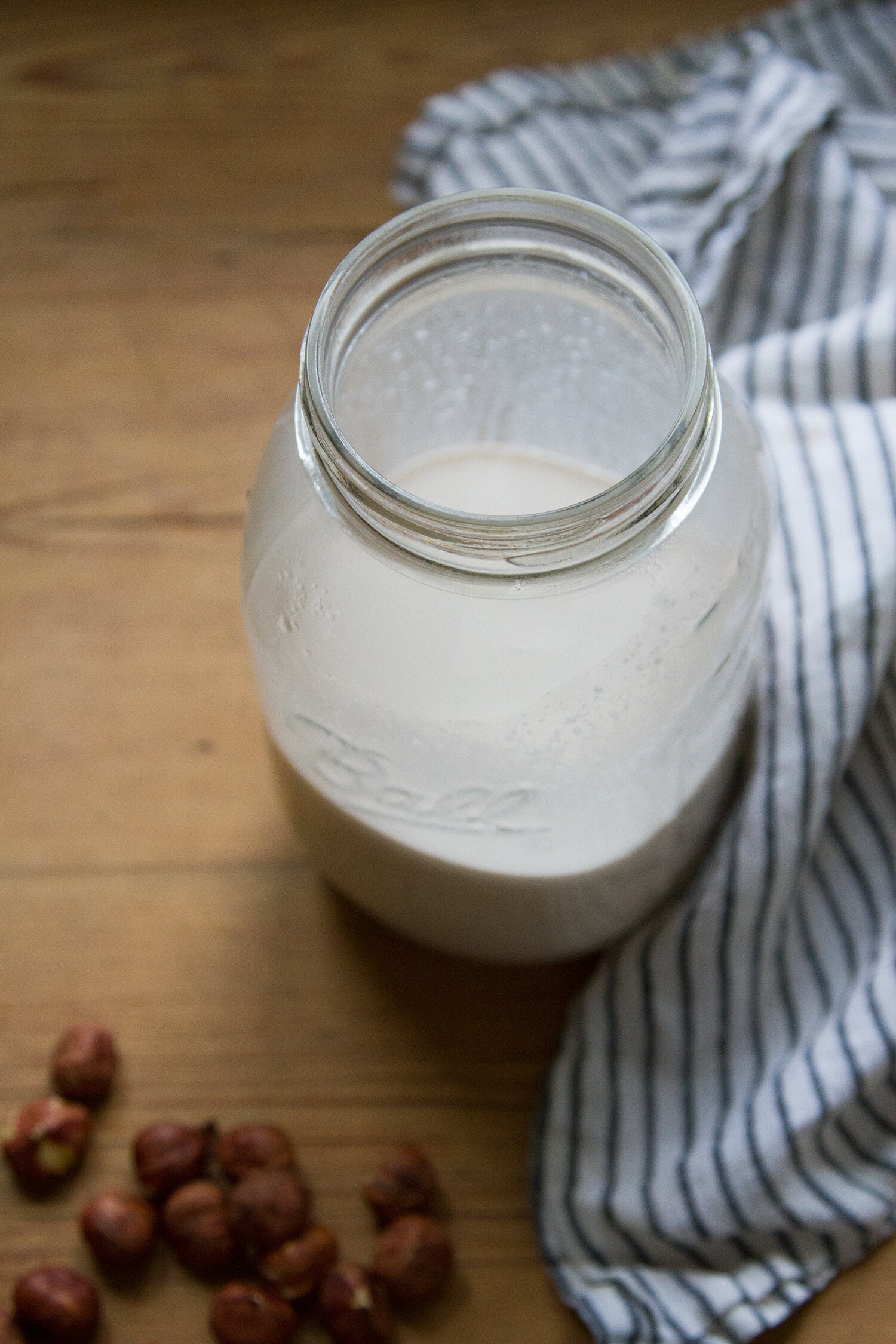 Once strained, chill the milk for a refreshing drink. The nut milk will eventually separate a bit, but another whir in the blender, or a hearty shake, should get it back to golden. I’ve been adding it to morning bowls of oatmeal, afternoon smoothies, and, of course, coffee.

The hazelnut milk—I’m tempted to call it cream—holds its own pretty well in our stovetop frother for a little fancy morning imbibing. 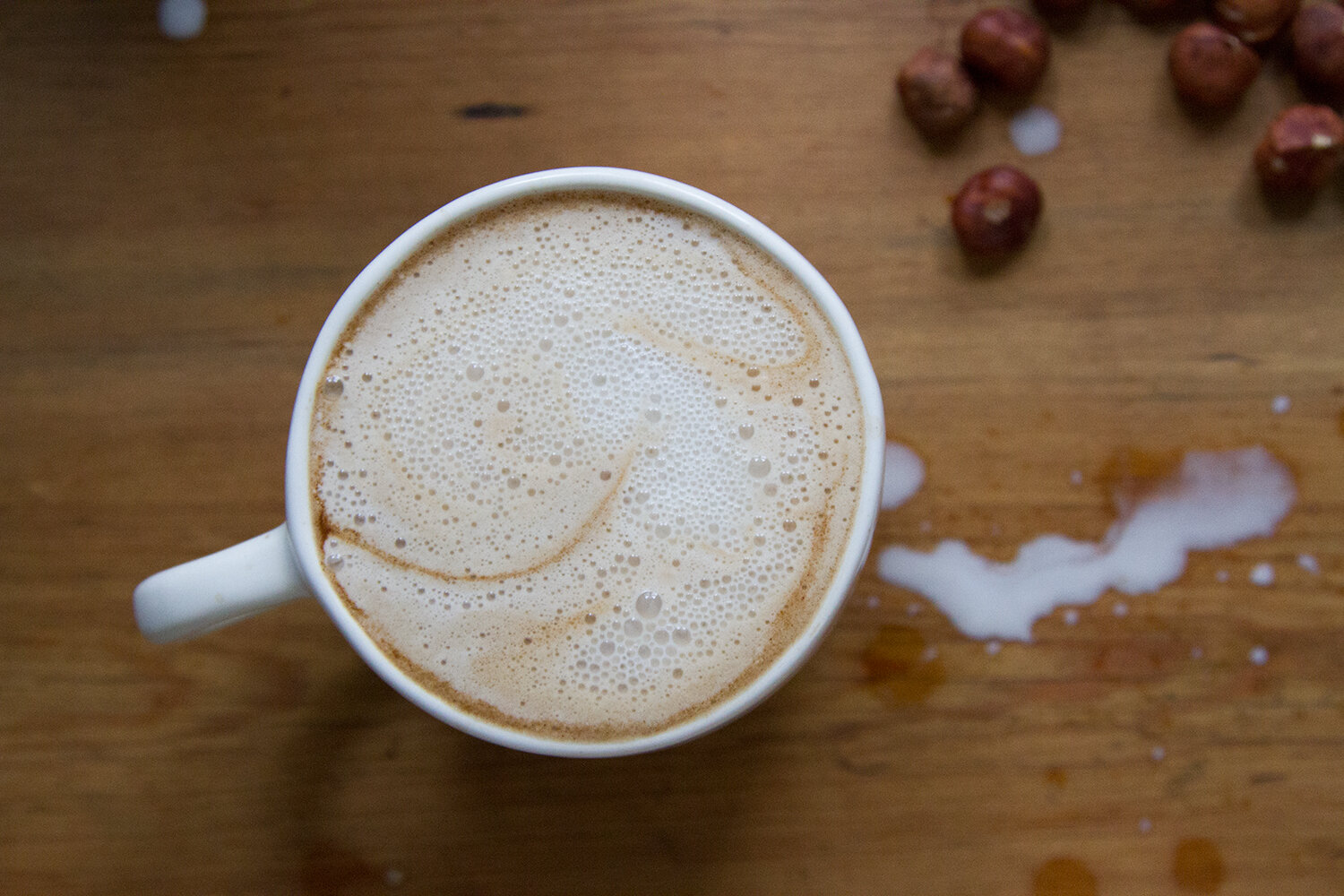 What about you guys? Forays into nut milking? Preferences? Tips? I’m all ears. 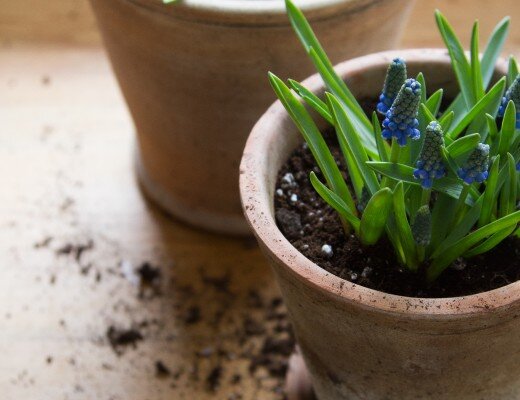 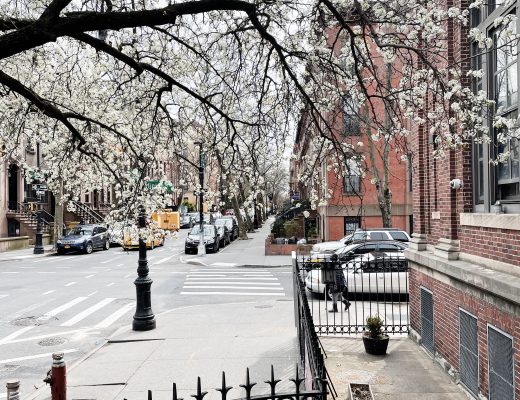 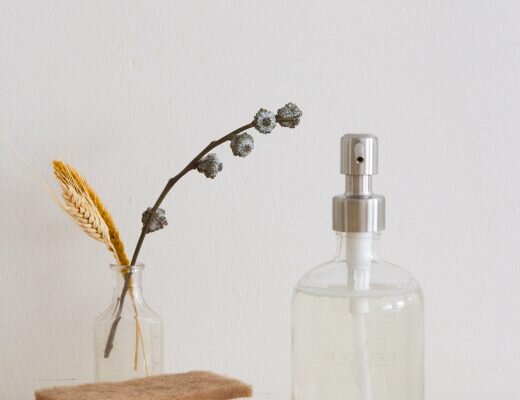