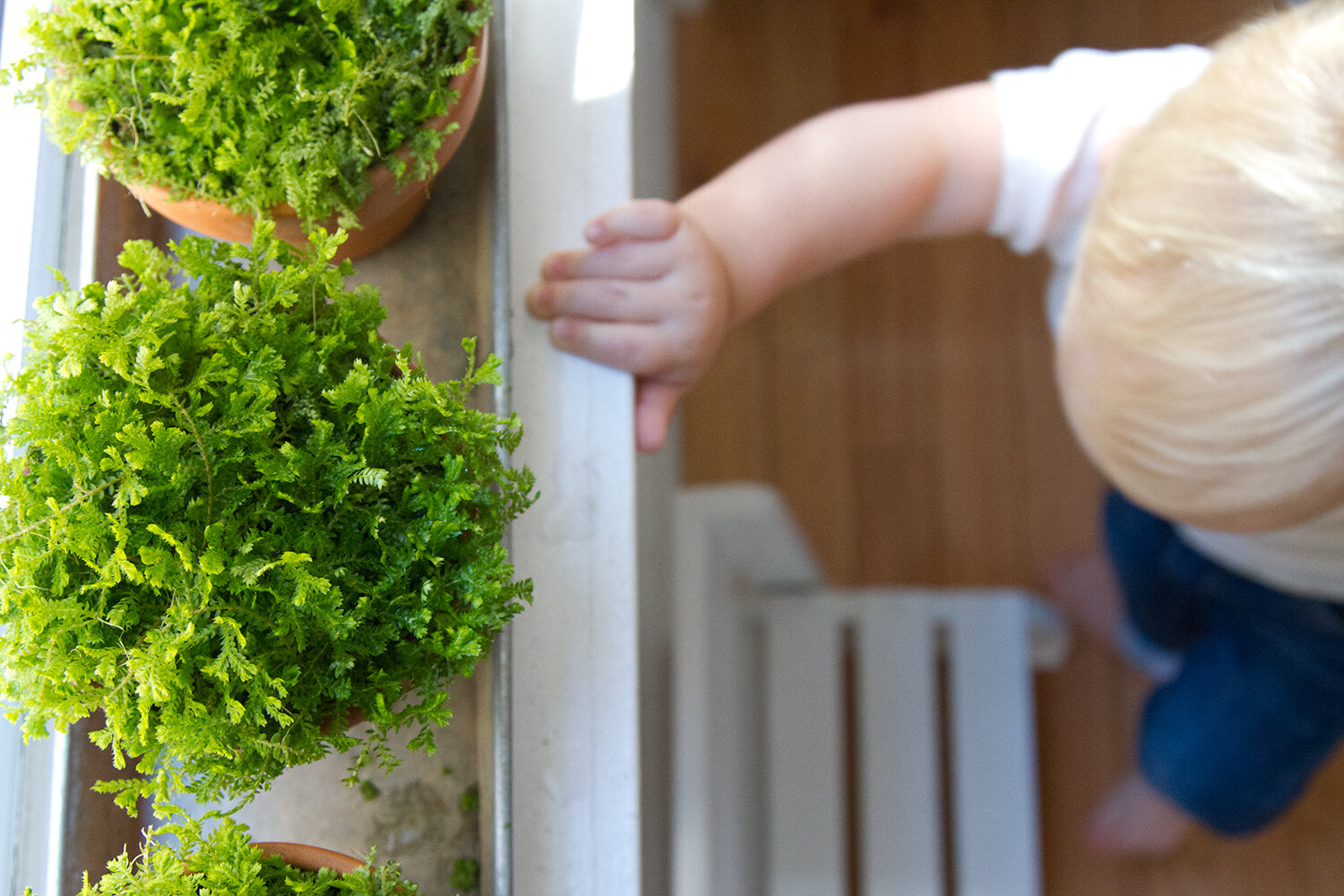 Yesterday I posted a photograph of our plecanthrus going gang-busters, and a few of you asked about how our plants have fared with a toddler in the house. The short answer is that while Faye is enthusiastic about plants in the wild—stopping to sniff anything that resembles a flower, a leafy green thing, or a once-green thing, like the long-dead chrysanthemum on our neighbor’s stoop—she’s fairly ambivalent about the plants in our house so far. She waters them weekly with James, but since they’re mostly kept on high windowsills she doesn’t have regular access to them.

But this spring, I’m looking forward to doing some potting up with her so that she has a little plant of her own to nurture. I did the same thing with my nephew when Faye was still teeny-tiny and watching him care for his charge was the sweetest thing.

I took these shots for a piece that never ran a few years ago, and thought I should finally share them here. My nephew Oliver was exactly Faye’s age—21 months!—when we planted these little mosses for his East Village windowsill garden.

In case any of you have a budding green thumb to encourage, here’s a list of supplies and some friendly advice. 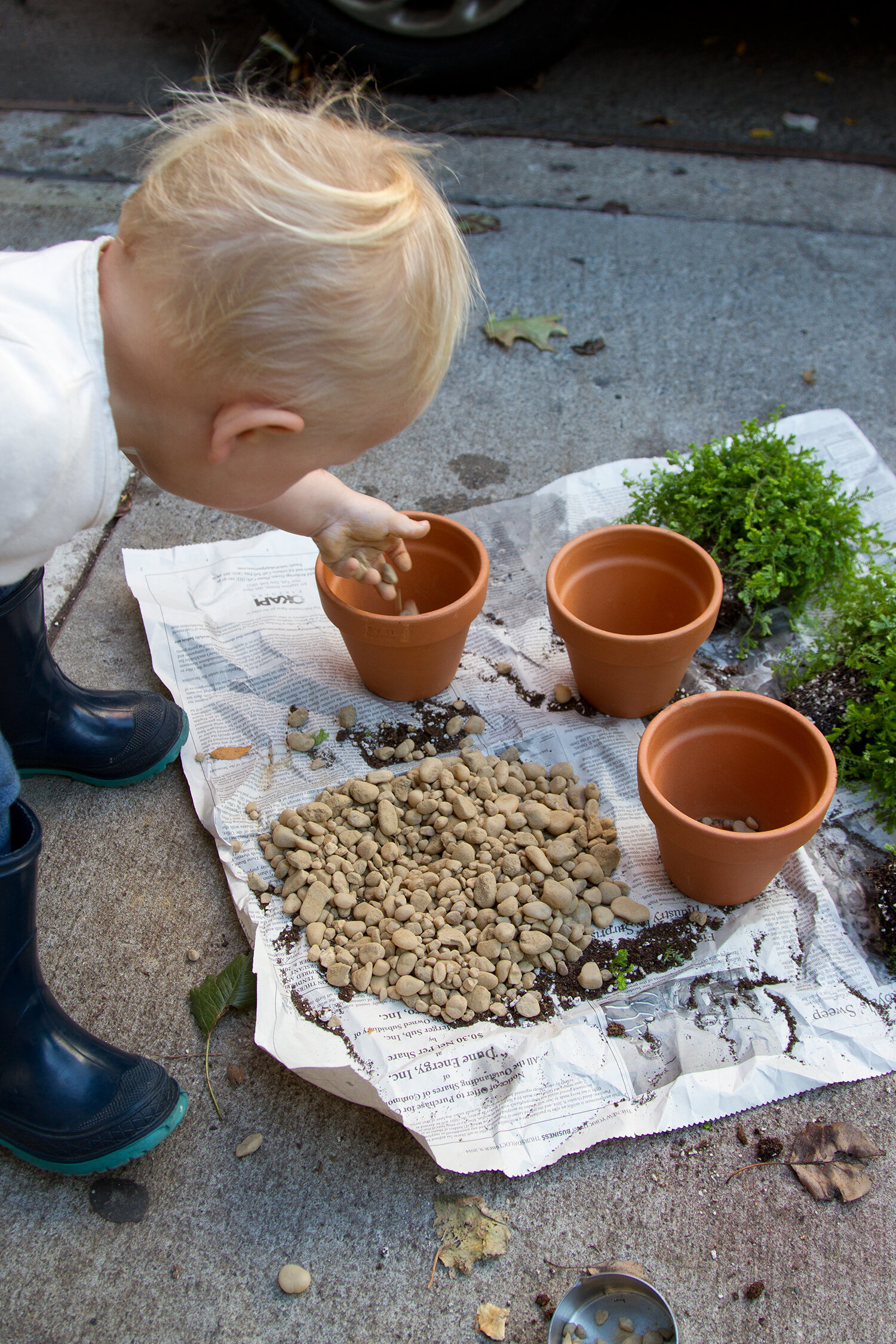 Small pot (or pots) with a drainage hole

A toddler-friendly houseplant, like the moisture-loving, low-light tolerant selaginella moss

A tray to catch extra water 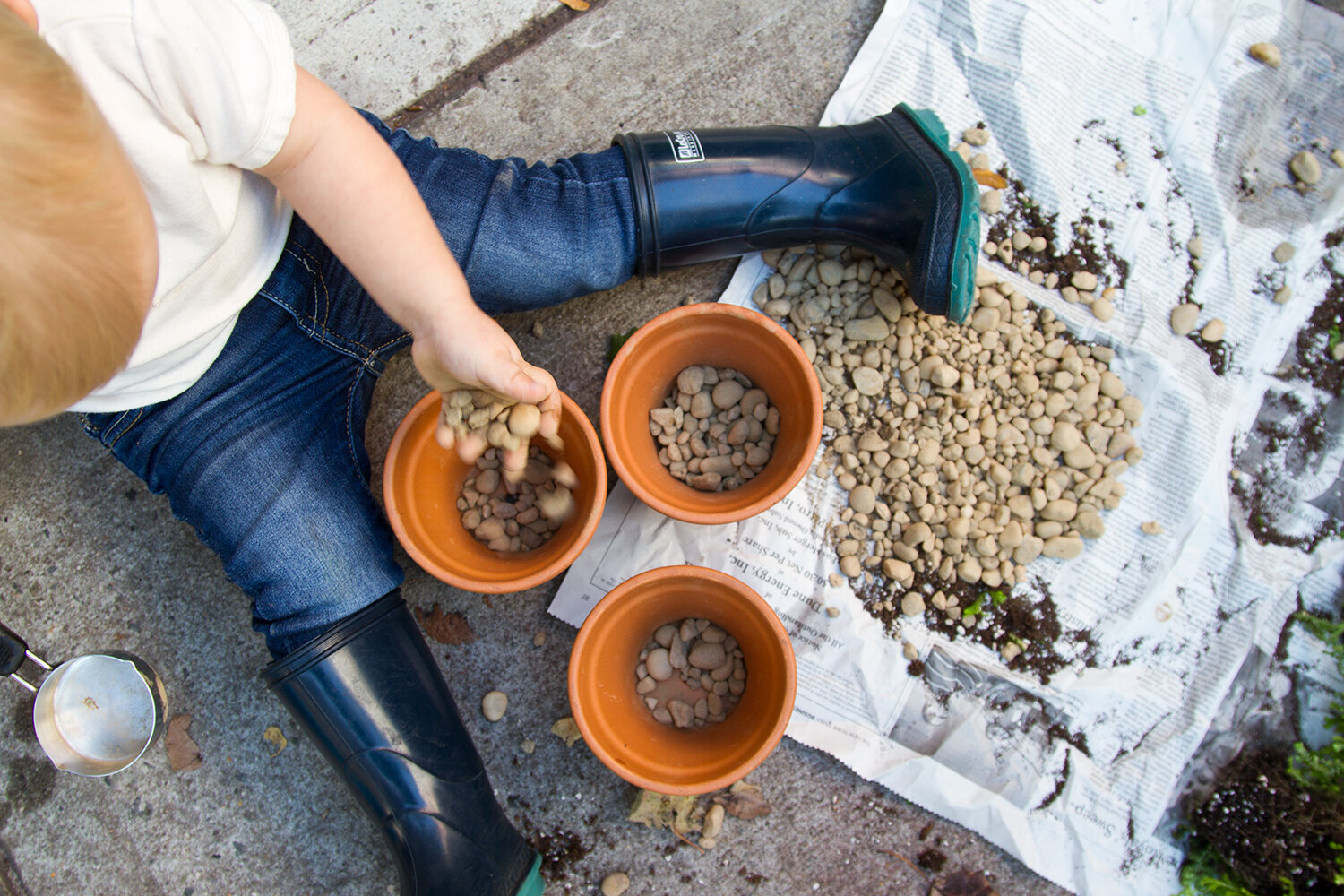 3. Your little guy might need help with this step: loosen the roots a bit before planting, then tuck the plant into the soil in your pot. Fill in any space around the plant with extra soil.

4. Water plant thoroughly (outside or in the bathtub works best)

5. Place the plant on a tray in a place that gets low-light and keep the soil moist, but not soaking. 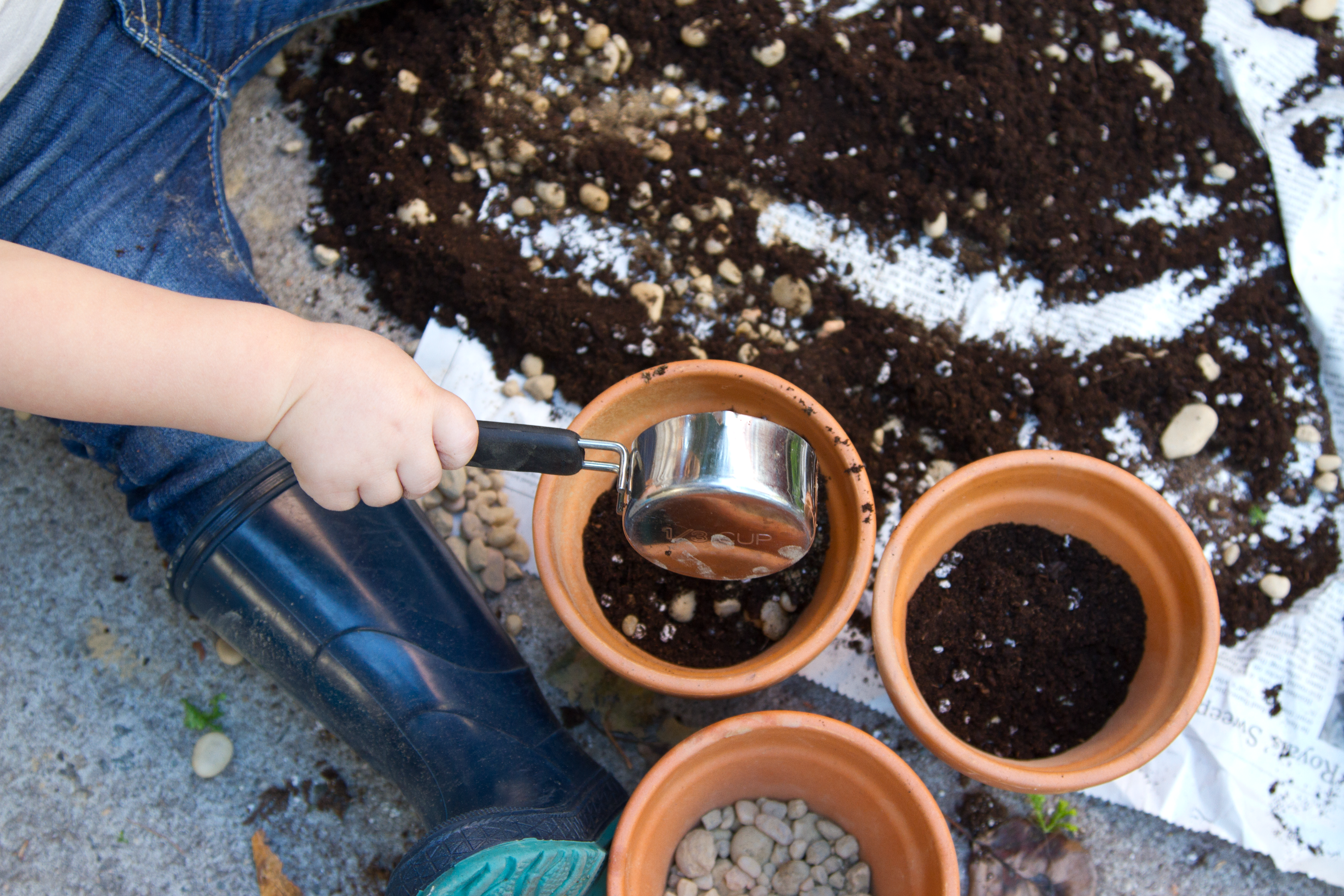 When it comes to supplies, feel free to err on the side of “use what you have.” Oliver was really into watering cans at the time that we potted these up, so we used a bright blue one on the day of planting. He’d recently lost his shovel at the tot-lot, so we used the ever-handy measuring cup instead. Bottom line: No need to go out of your way to get special “gardening supplies” to do this project.

Newspaper is my go-to tool for tackling city gardening projects. Even if you don’t get a paper delivered, it’s pretty easy to come by an extra sheet or two (the sheet we used in these photos had been wrapped around the terracotta pots we got from the hardware store). We used newspaper to cover the patch of sidewalk where we were working so that we didn’t leave behind too much of a mess. When we were finished planting, we could scoop up the extra soil and pebbles onto the newspaper for easy cleanup. (If you live in a place with easier access to a spot of grass, forgo the paper!)

Expect to get a little dirty. That’s the point! 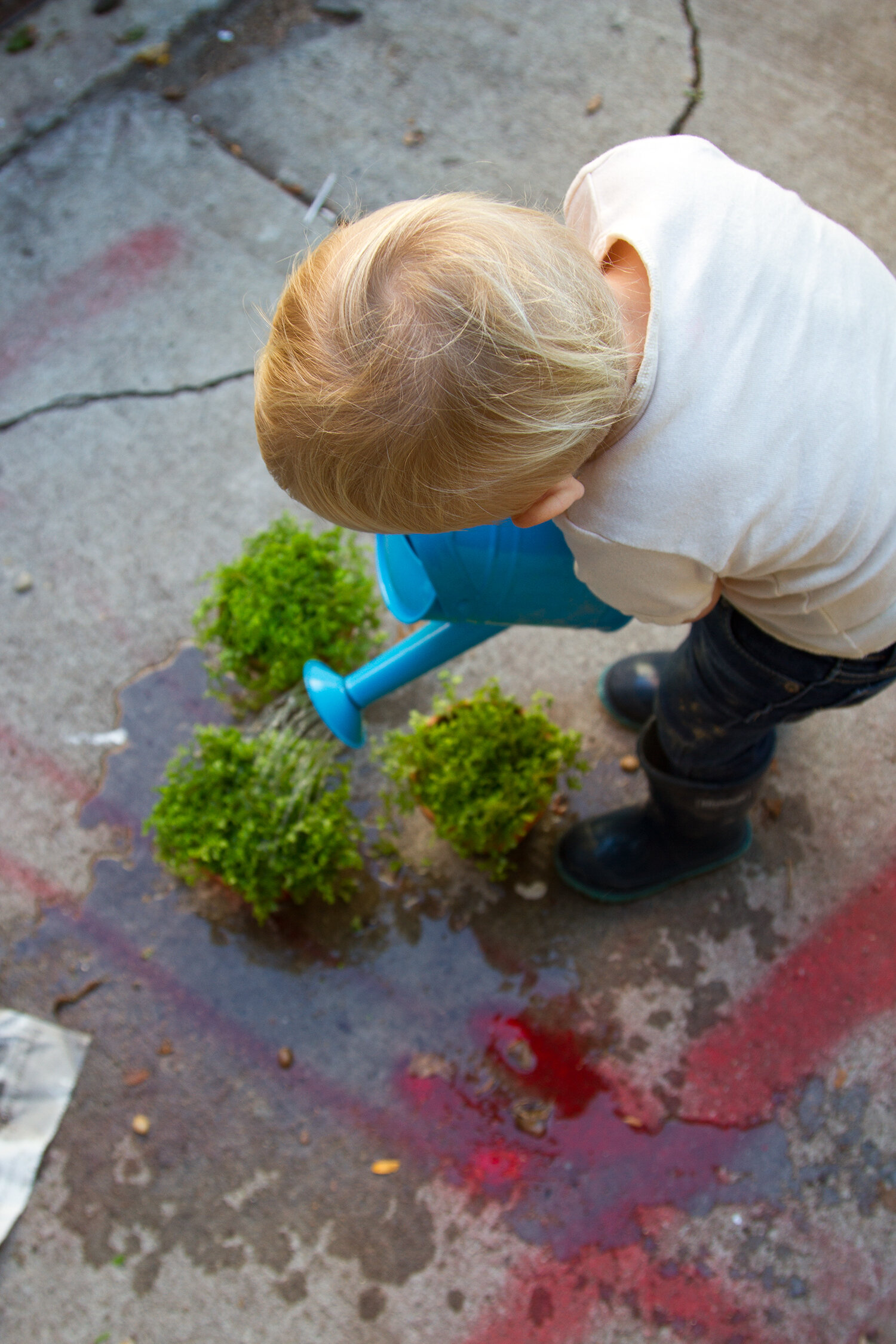 Notes on watering and plant choice:

Where adults might tend toward neglecting their houseplants, the trouble with eager toddlers is the opposite. My nephew had recently drowned a potted plant with his extra-attentive approach to plant care when we took these shots. To counteract the over-eager waterer, I chose a plant that likes to be fairly wet: a selaginella—also called clubmoss. The selaginella also thrives in dim light, which is the kind of light found in most city apartments. It gets extra points for being so fluffy and cute.

The pebbles were our second tactic in the battle against over-watering. Filling the pots up 1/3 of the way with small rocks means that there’s ample space for excess water to drain out of the soil to avoid rot. We also chose simple terracotta pots with drainage holes and put the pots in a tray to catch any run-off.

If you’re not sure where to look to for soil and pebbles in the city, haunt your local hardware store. Most hardware stores stock small bags of both for city-garden-sized projects, and some even sell by the scoop! 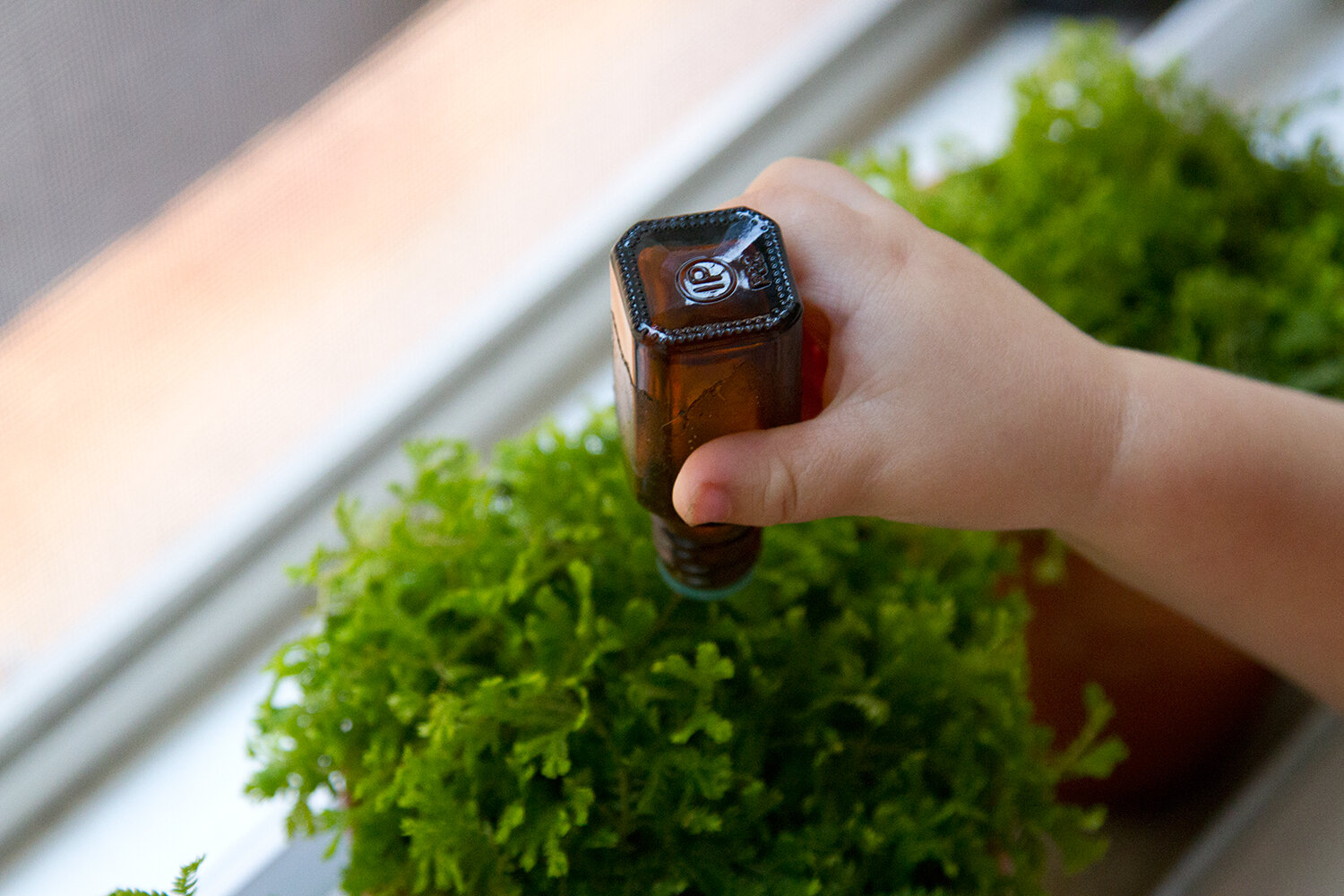 How to handle watering inside without creating a watery mess? This took a little bit of puzzling. Oliver’s enthusiasm for the watering can definitely made it an outside-only tool. My sister and I experimented with other bottles that would allow him to water his own plants without flooding the apartment. We finally settled on a recycled dropper bottle, like the kind that essential oils come in. He could shake that little thing to his heart’s content and never really make a mess. Another idea: an empty travel-sized contact solution bottle. For older kids with bigger hands, a spray bottle can act as a mister and also ensure that the plant doesn’t get too much water.

Totally mess opposed? Air plants to the rescue! They need more water than you might think and could be the perfect thing to train a little plant lover! 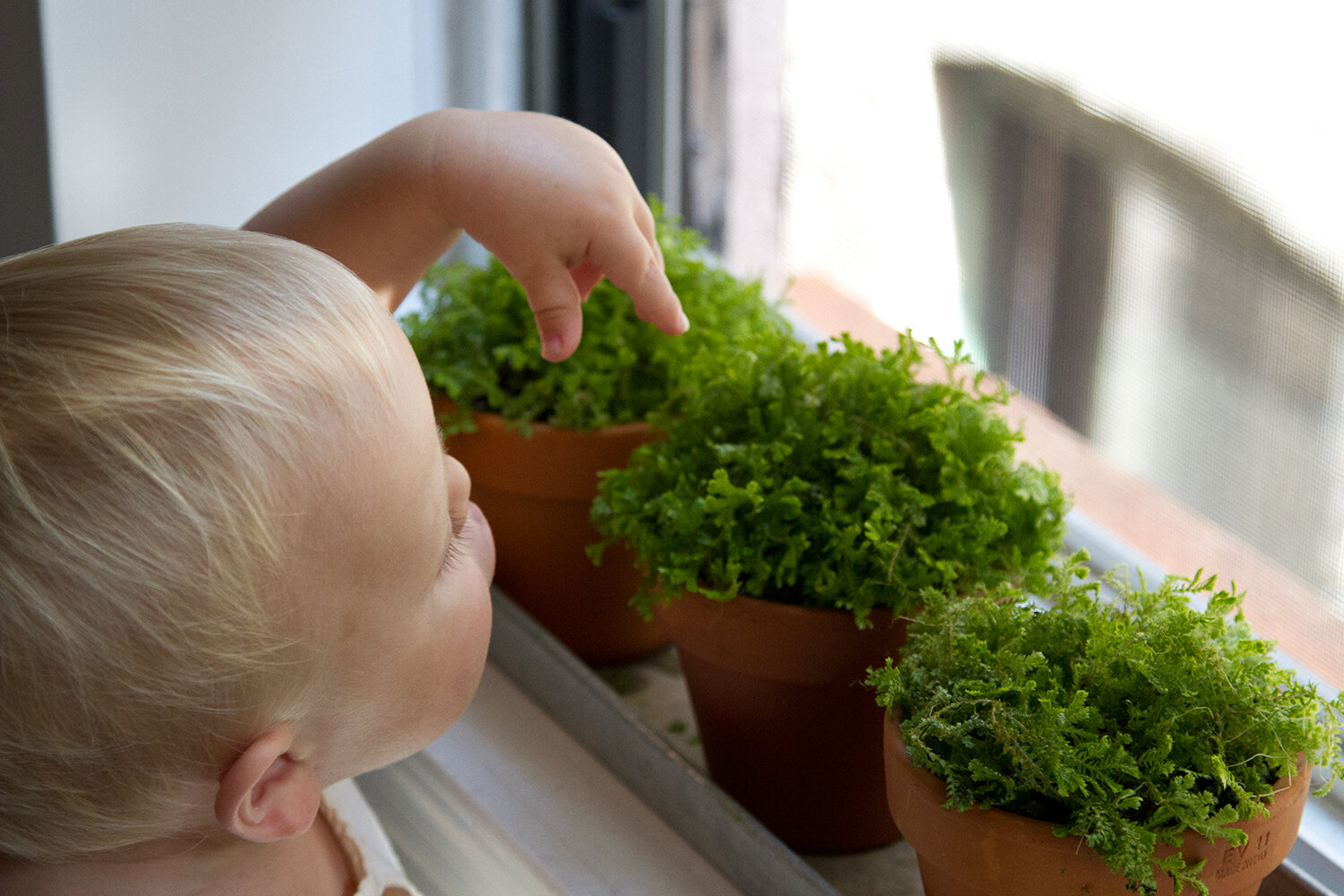 Notes on dealing with loss:

Plants die. The only truly human-proof houseplant is a fake one. In Oliver’s room we chose to keep the plants accessible at chest level so that he could water whenever inspiration struck (with supplemental waterings from his mom and dad). But that also meant that he occasionally asked (or didn’t ask) to lift a pot out of its tray, resulting in the occasional soil spillage. (Some parents might wish to anchor the tray or keep it in a spot that allows for easy cleanup.) But don’t sweat it if your tiny garden looks less than fresh after a few weeks. The good news is that the potting up is half the fun. Make a stop to your local nursery and start again! 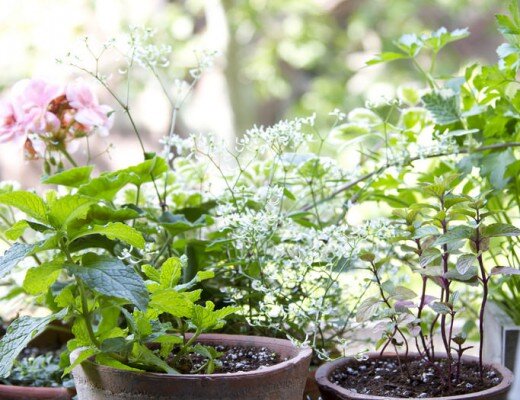 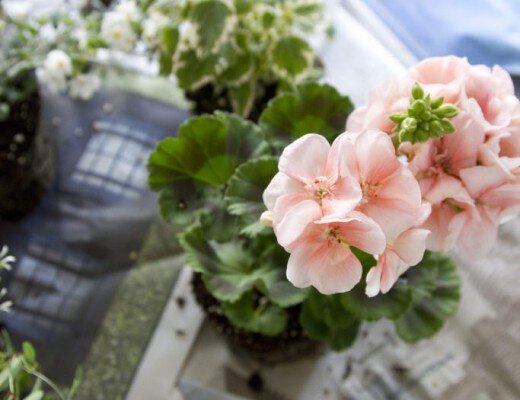 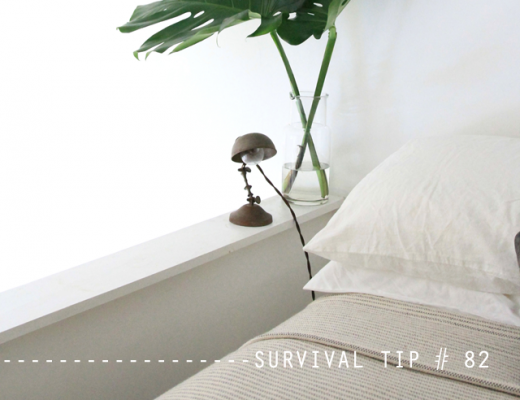