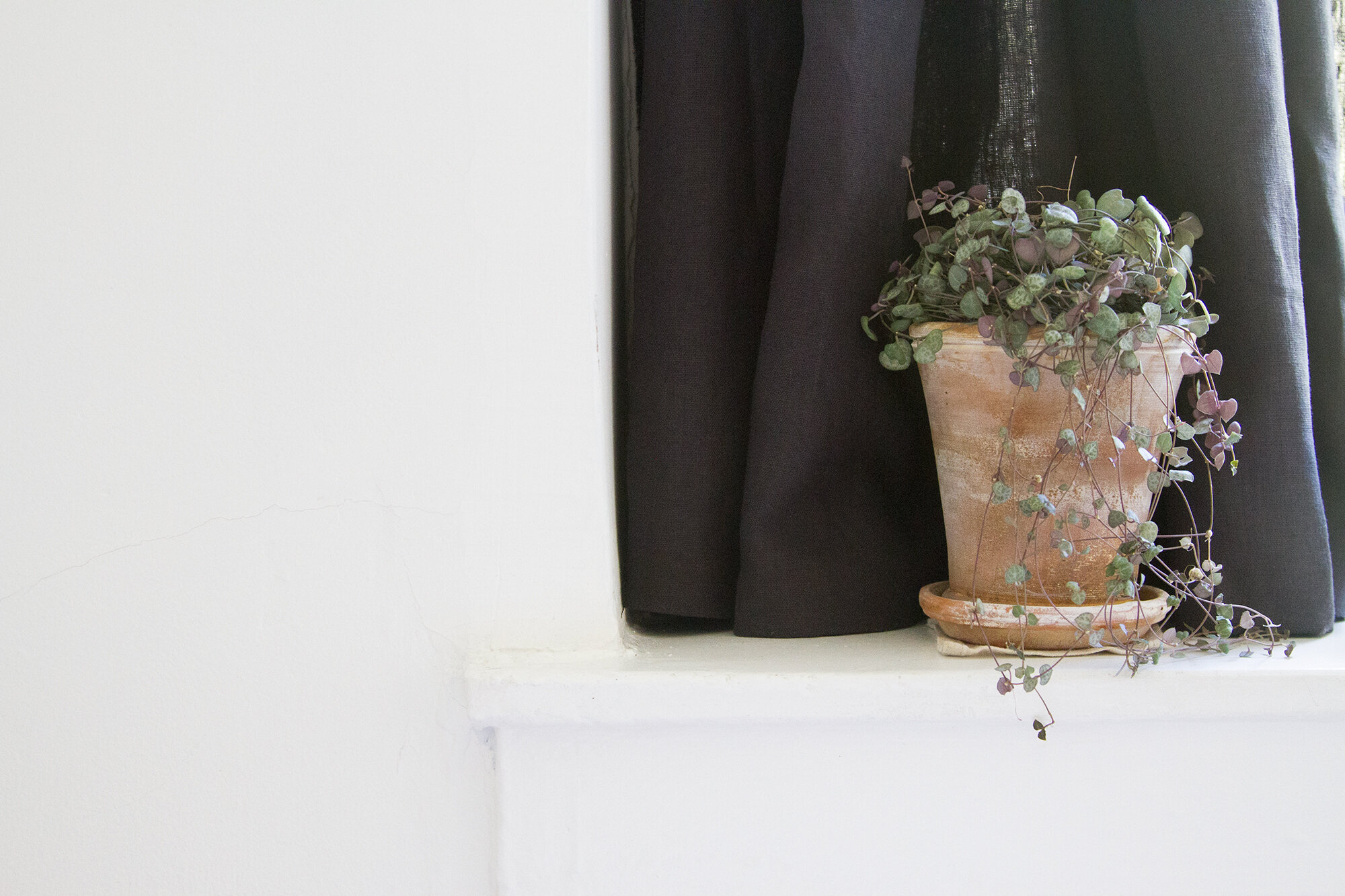 My philosophy on baby gear mostly follows the simple guideline of “wait and see.” That all babies need all of the things is a fallacy manufactured by the people trying to sell babies (or their parents) all of the things. I am not here to tell you that a blackout shade is a necessity. But in some cases, an artificially darkened room can help a little one get to sleep, especially if there’s artificial brightness to contend with.

When Faye was born, no surprise, we didn’t have a blackout shade or curtain in our room. For the first few months of her infancy, when she slept like a baby goddess descended from above, we didn’t feel any real urgency to get one. At about five months when she decided that being awake was more fun than being asleep, we figured that perhaps shutting some of the light pollution out of our room would do a baby (and a body) good. (Protect the circadian rhythm and all that jazz.)

In a middle-of-the-night attempt to get a bit of precious sleep, I flapped my arms at James from my prone position and told him to rifle through my top dresser drawer to find my black beach sarong. Black, I reasoned, would block the light. Immediately, I hoped, would make a difference. And the darkened room that resulted seemed to help, at least partially. (Which, is all any parent can ever hope for.)

For a year and half, our nightly routine included attaching this same black cotton beach sarong onto our existing linen curtain with clothespins. Yes, it looked bad. Yes, it was annoying. But we mostly only kept it up at night and it was innocuous enough that I didn’t mind terribly much.

Eventually however, our curtain needed replacing. Having been repurposed to fit three different windows in three different apartments, it was showing more than a few signs of abuse. This spring, I decided to retire the sarong altogether and to replace the curtain with a single, darker curtain that could be pulled shut with the flick of a wrist. I bought a length of denim at a local shop and hung it temporarily in the window vowing to properly hem it eventually. Then we went to France. And a month or so after we got back, it was clear that the fabric choice was great at blocking light but not so great at looking nice in the room. I couldn’t get the denim to drape nicely and, frankly, the color was all wrong. So I began my hunt again, this time looking for linen in a color I could tolerate. Mission finally accomplished.

I’m not claiming to have found the most perfect blackout curtain solution on the planet, but it was an affordable one to make and it didn’t include hanging anything with questionable origins or materials in my house. 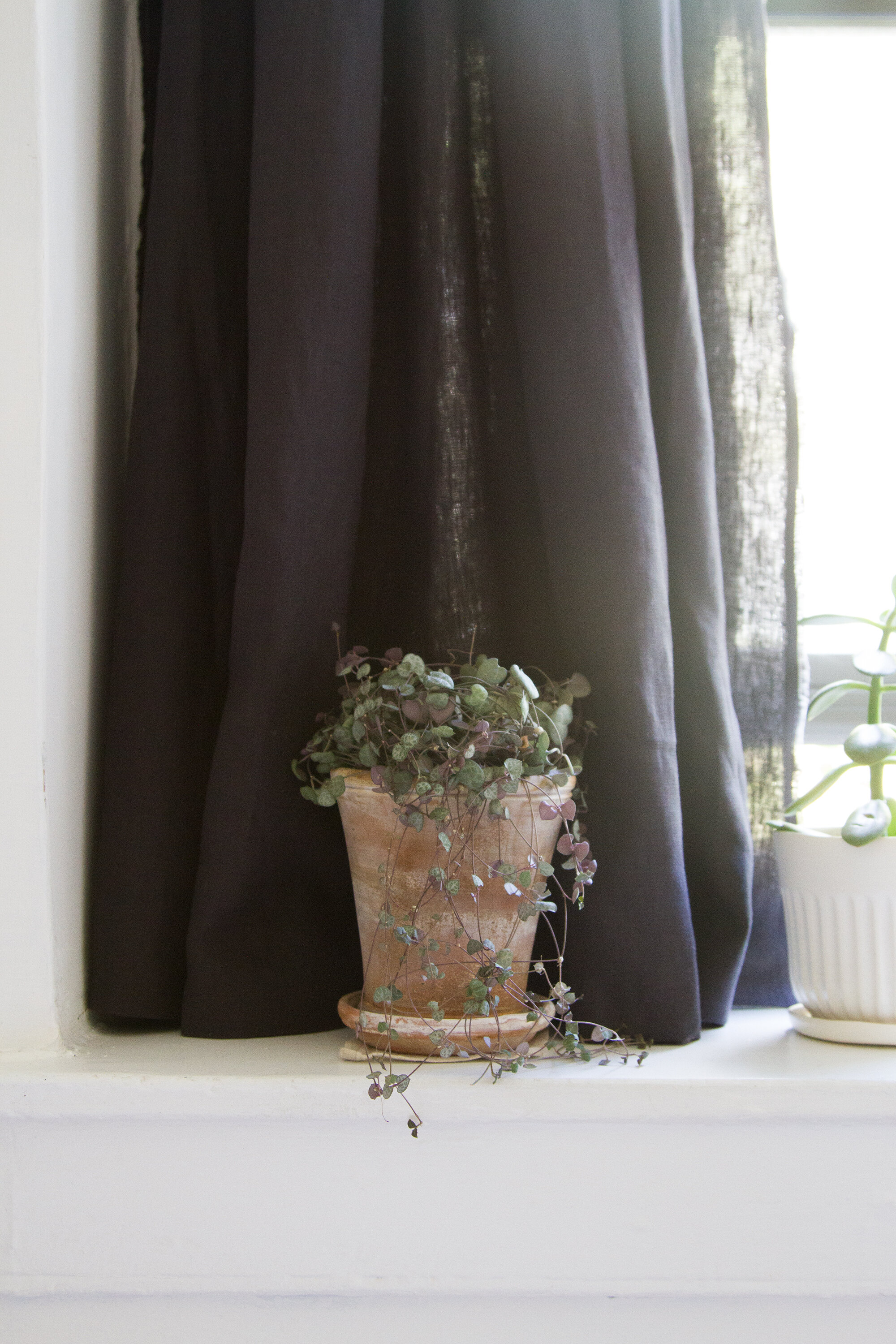 Here’s a few things to know:

Fabric choice: Most any dark fabric will do a sufficiently good job (in my humble opinion) at blocking day and street lamp light. It won’t be, perhaps, as impenetrable as a vinyl or polyester shade, but in my experience, getting those to fit perfectly enough in a window to not allow any light leaks is tricky business. (And as a renter, buying a custom fitted shade for a strangely sized window also feels like a particularly bothersome thing to spend money on.) Besides, I don’t like to sleep in truly pitch black room. When I went on my second trip to a fabric store, I held the fabric up to the light to see how much light bled through and paid a bit more attention to how the fabric fell. There were a lot of different linens on offer when I shopped and I ultimately chose one that was medium weight so it would block light but still drape nicely. 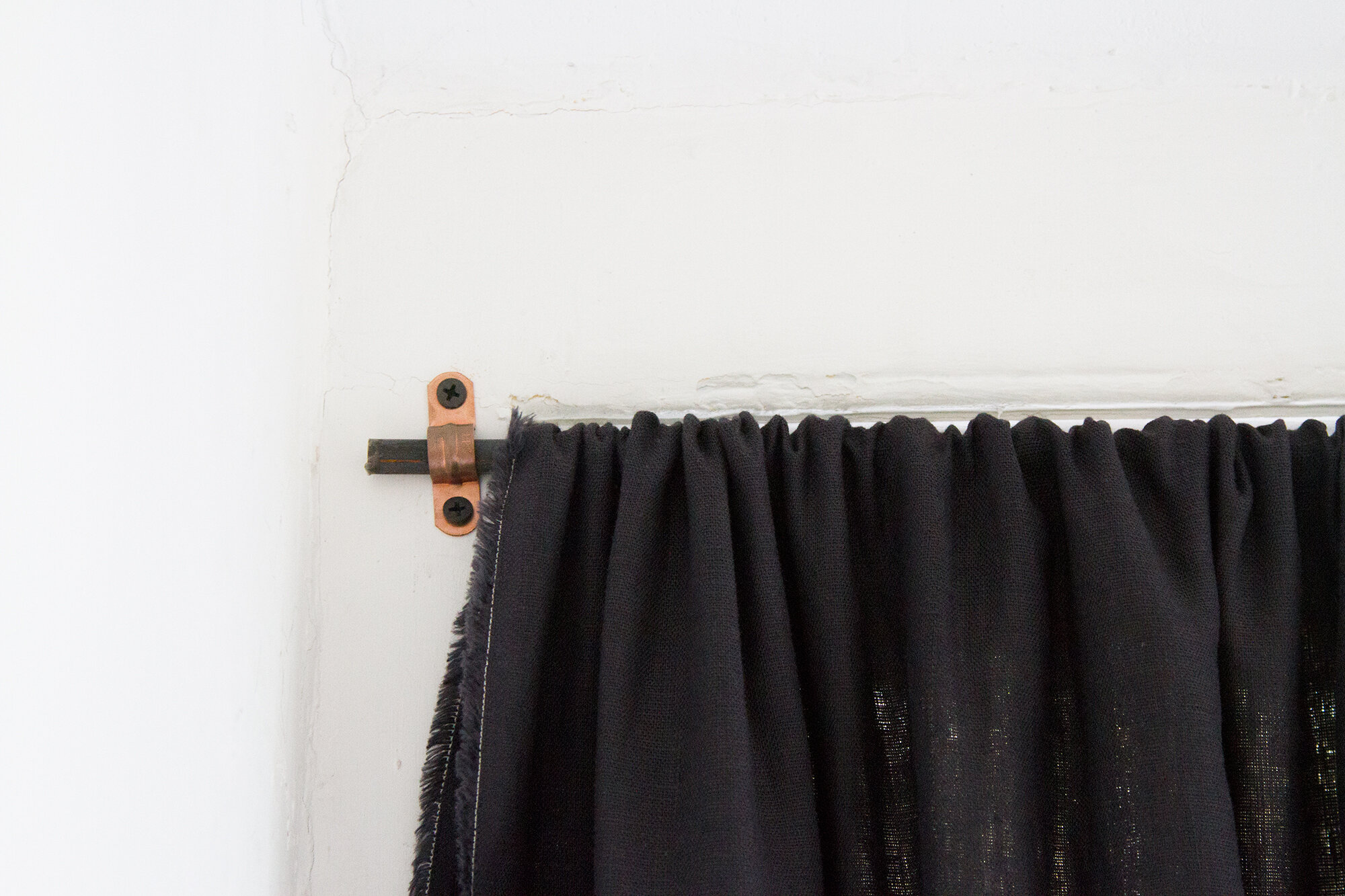 Hardware: We have a very cheap hardware-store-hack curtain rod in Faye’s room. It’s really not perfect which is why I’ve never done a tutorial per se, but if you’re into slightly wonky and very cheap, this is what we have: The rod is a length of thin wrought iron that I asked a local iron shop to cut for me when we first moved to Brooklyn six years ago. (They happily obliged and charged me $5 for trouble and the iron). The rod is fastened to the wall with pieces of copper pipe fittings, found at the hardware store for around the same cost as the rod. They secure the rod to the wall in a perfectly satisfactory manner, but because they’re screwed in, they don’t offer a lot of flexibility. You can’t, for instance, remove the rod easily for curtain cleaning purposes. (See my solution below.) 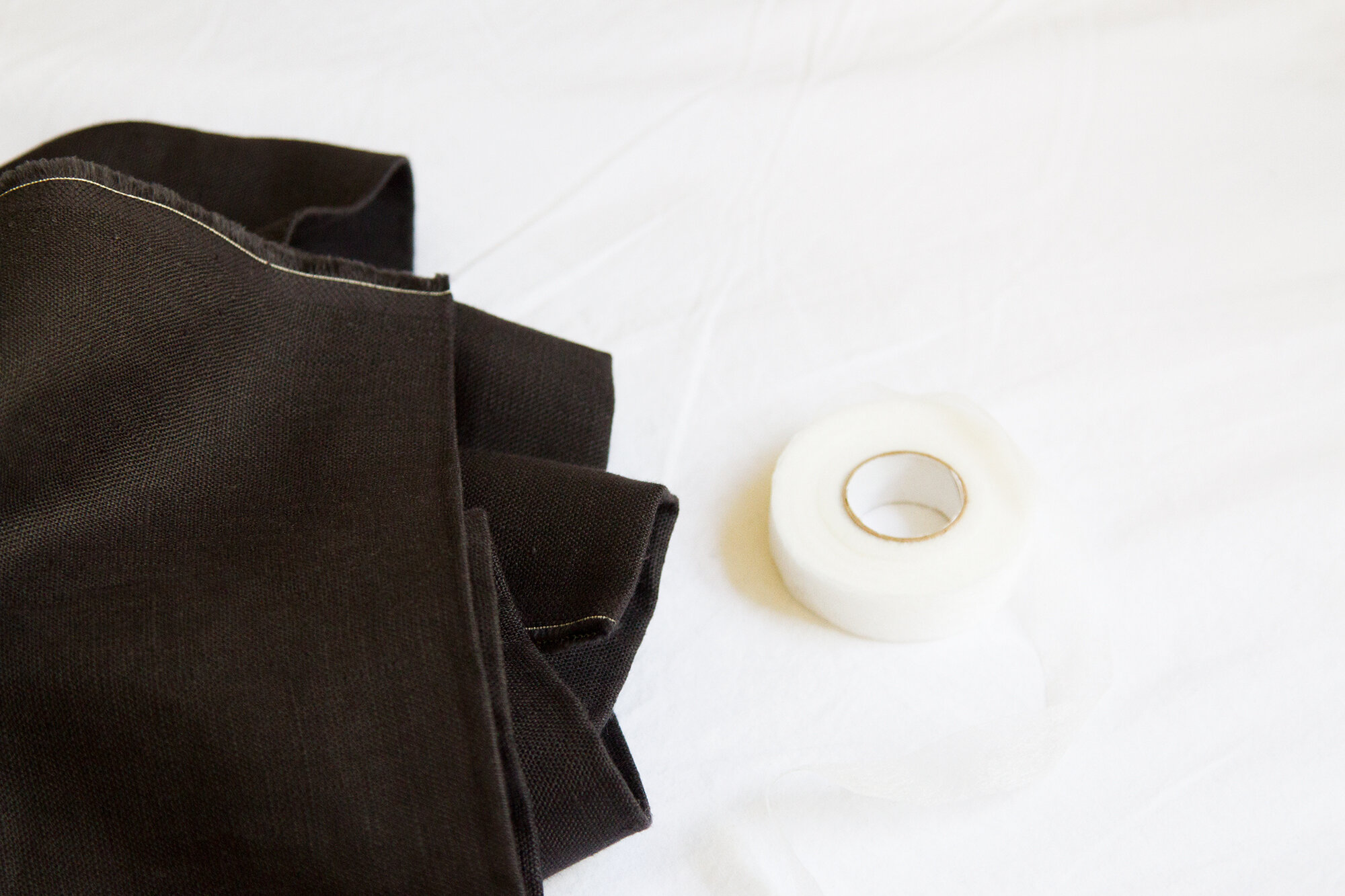 Construction: Since I don’t have a sewing machine and I have a curtain rod that’s not easy to remove from the wall, I decided on a very, very simple approach to curtain-making. It’s my go-to trick that I’ve used since our days in Providence. First, I choose a fabric that was wide enough across that it didn’t need to be sewn to fit, width-wise. I also choose a fabric with a selvage edge which means that it won’t fray and didn’t need to be hemmed along the edges. (Word to the wise: Inspect your selvage carefully before cutting at the fabric shop. I didn’t, and the edge on this curtain is a little undone in places.) Instead of making a pocket, the curtain is simply doubled over the top of the rod so that the two bottom edges meet along the sill line. (This method helps with additional light blockage, but it requires about double the fabric). This time, I actually cut and measured and used iron-on adhesive tape to make a simple hem along both bottoms instead of hacking the fabric with pinking shears. It made a huge difference in the overall effect; highly recommend the extra effort. 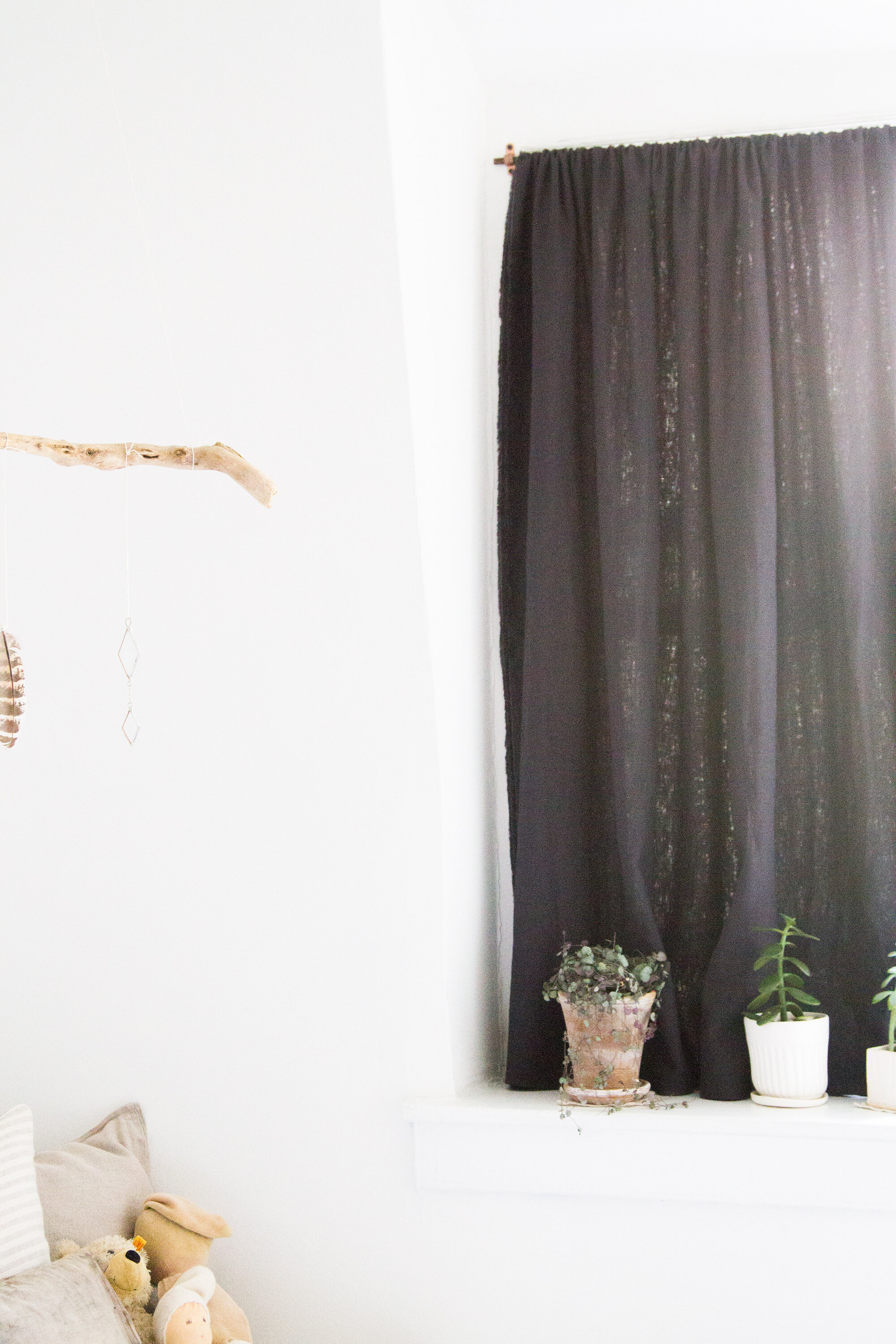 And that’s that. A blackout curtain for a kid’s room. (Er, kids’ room. Gulp.) 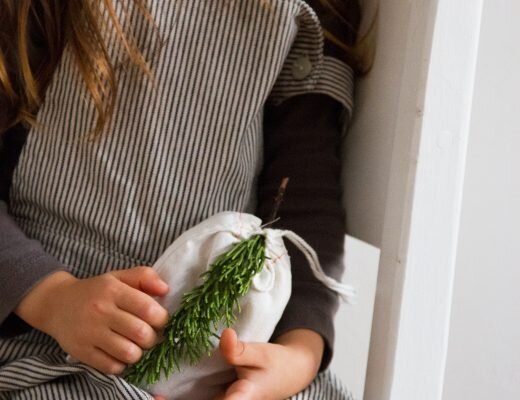 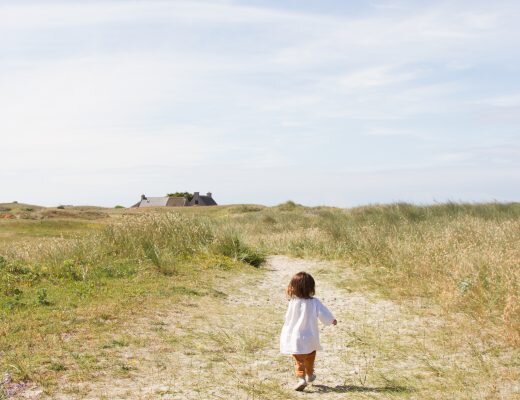 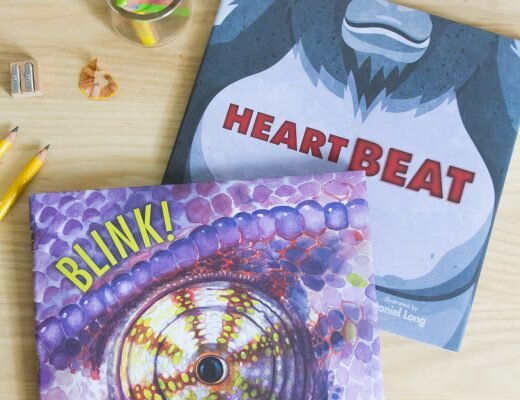