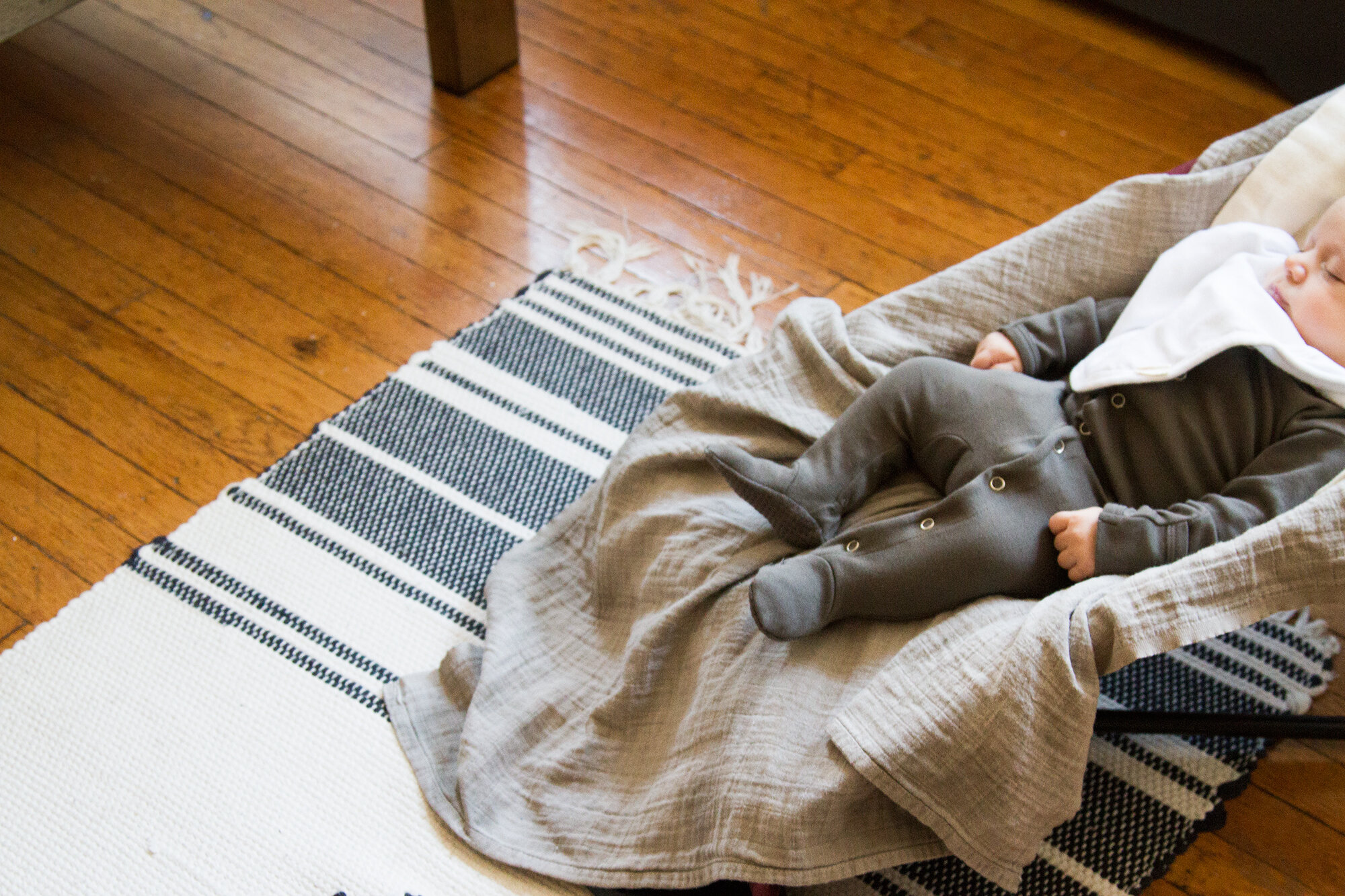 Last week, I forgot to bring a carrier out with me when I threw caution to the wind and took both kiddos out for a stroll. Silas was snug in his stroller. Faye was a dream of a kid, walking alongside me and chattering away. Despite one nerve-wracking moment when Faye decided to bolt down the sidewalk screaming “cheddar” (your guess is as good as mine), we made it back to the house in three distinct but very much intact pieces.

Once we made it back inside our building, all hell broke loose. One kid refused to climb the stairs to our apartment. The other threatened to slip from my grasp with every bob of his head. I finished by needing to football carry my children up four flights of stairs while all three of us wailed. It wasn’t my best look.

For even the most resolute, having kids in our culture encourages unicorn hunting. Without a community of aunties or uncles or grandparents around to help us through all of our daily maneuvering and give us what we really need—extra arms and eyes and pairs of legs—we search for an elusive contraption or gadget or cure-all that can fill the void. Lord knows the baby industry is wise to the hunt. There’s a horse masquerading as a unicorn for most every possible problem that might arise over the course of the day. Baby showers often mean new parents invest in problem-solvers before there are problems to be solved. And over and over again we hear about parents getting overwhelmed by too much stuff.

My usual approach for fending off stuff is to go slowly. One can make all manner of impulsive purchases in the wee hours of the morning while nursing a milk-tank of a baby. (I’ve not yet seen an elevator for sale on Amazon, but if I ever did…) To avoid the pitfall of too much stuff, I’ll usually muscle through the trial rather than welcome another item into the apartment. Foolishly or not, my desire for a clutter-free home trumps my desire to bring potentially helpful items of baby gear into my house nearly every single time.

Truth is, I felt super confident about this the first time around. There wasn’t much that I regretted going without and I really never felt overwhelmed by stuff. But when faced with the reality of juggling two small little guys—and in an effort to avoid an endless series of family-wide meltdowns—I’ve found myself doing some unicorn hunting.

This time my approach has been largely to beg, borrow, and  buy secondhand. It’s not a question of being stingy or cheap. There’s just so much stuff already tucked under beds and shoved in closets and languishing in garages, that it makes a lot of sense to borrow what we can, to loan what we’re not using, and to buy used what we think we might beat up too much to bum from someone else. More than all of that: it’s important to remember that it’s unicorns we’re after. It’s nearly impossible to know whether something is actually going to solve the particular problem that we face and so getting the chance to give something a try, or to buy it a reduced price, makes all of the hunting a little less harsh on the resources. 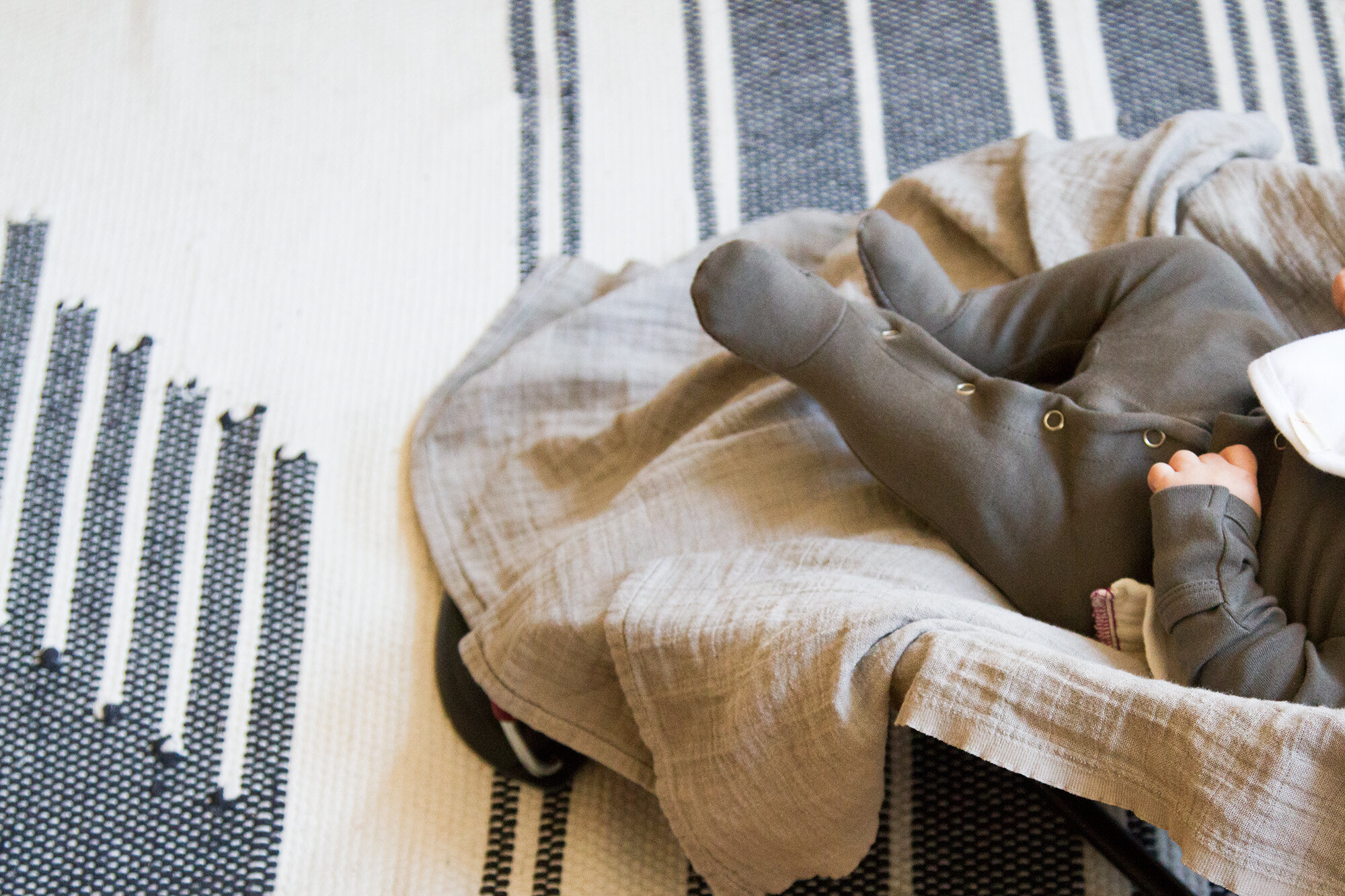 Here, a few recent examples from my life:

Or, just ask. We didn’t have a bouncy chair with Faye, but being able to gently rock one baby with my foot while reading a story to a much bigger baby in my lap sounded wonderful. I knew one of my friends had a just such a chair folded up under her bed and so I swallowed my pride and asked if we might be able to use it for awhile. Built of the same stuff as I am, she was more than happy to part with a bit of under-the-bed clutter and she brought it to my house on a blustery winter night. We usually use it with a little swaddle draped over it, and when Silas has finished with it in a few months, I’ll return it to my friend. In the meantime, it’s not taking up room in her apartment. Win, win?

I never used an infant stroller with Faye, but needing to work out of the house at least part of the day while also caring for an infant has meant that this time around, I needed to find a solution. Of course I started by being stubborn and even when a friend volunteered the use of her umbrella stroller frame that turns a carseat into a thing with wheels, I at first said no. A few weeks ago, I texted her from the café where I was sitting with Silas balanced on my knees, and let her know I was (more than) ready to take her up on her offer. She dusted off her umbrella carseat stroller and met me in the foyer of her building to pass it my way a few hours later. At the time of writing, I’m sitting in café while Silas snoozes peacefully beside me, tucked into his carseat (borrowed from my older sister).

As some of you might recall, we bought our crib mattress secondhand through Craigslist when Faye was a few months old. It’s held up beautifully, and I’m sure when the time comes, we’ll be able to pass it along to someone else. We also recently started trolling the internet for a secondhand stroller to accommodate two. I’d sworn that I’d never succumb to a double stroller, but now that I have two children, one of whom most enjoys running pell-mell into traffic, the unicorn hunting begins again.*

*We ended up finding an outdated model of a stroller at a local shop to buy at a deep discount, so we’ve got new wheels as of this weekend. Not gonna say it’s not huge and hulking. Will say I can now walk down the sidewalk while also breathing. Breathing feels good.

Moral of the story: Search for unicorns when you really need them. You might only find a horse in disguise, but sometimes that’s better than nothing. 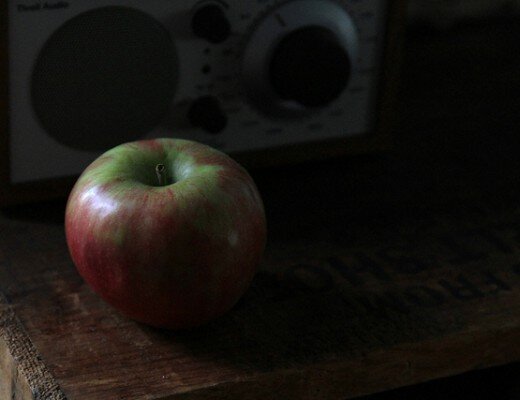 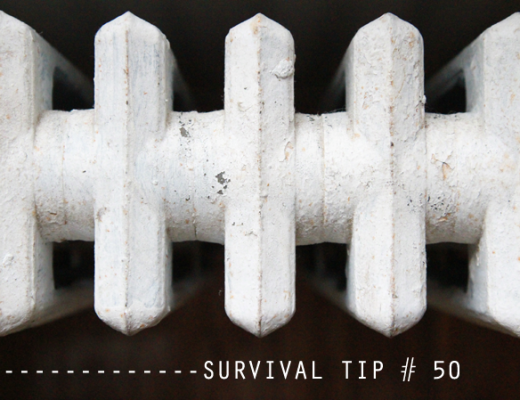