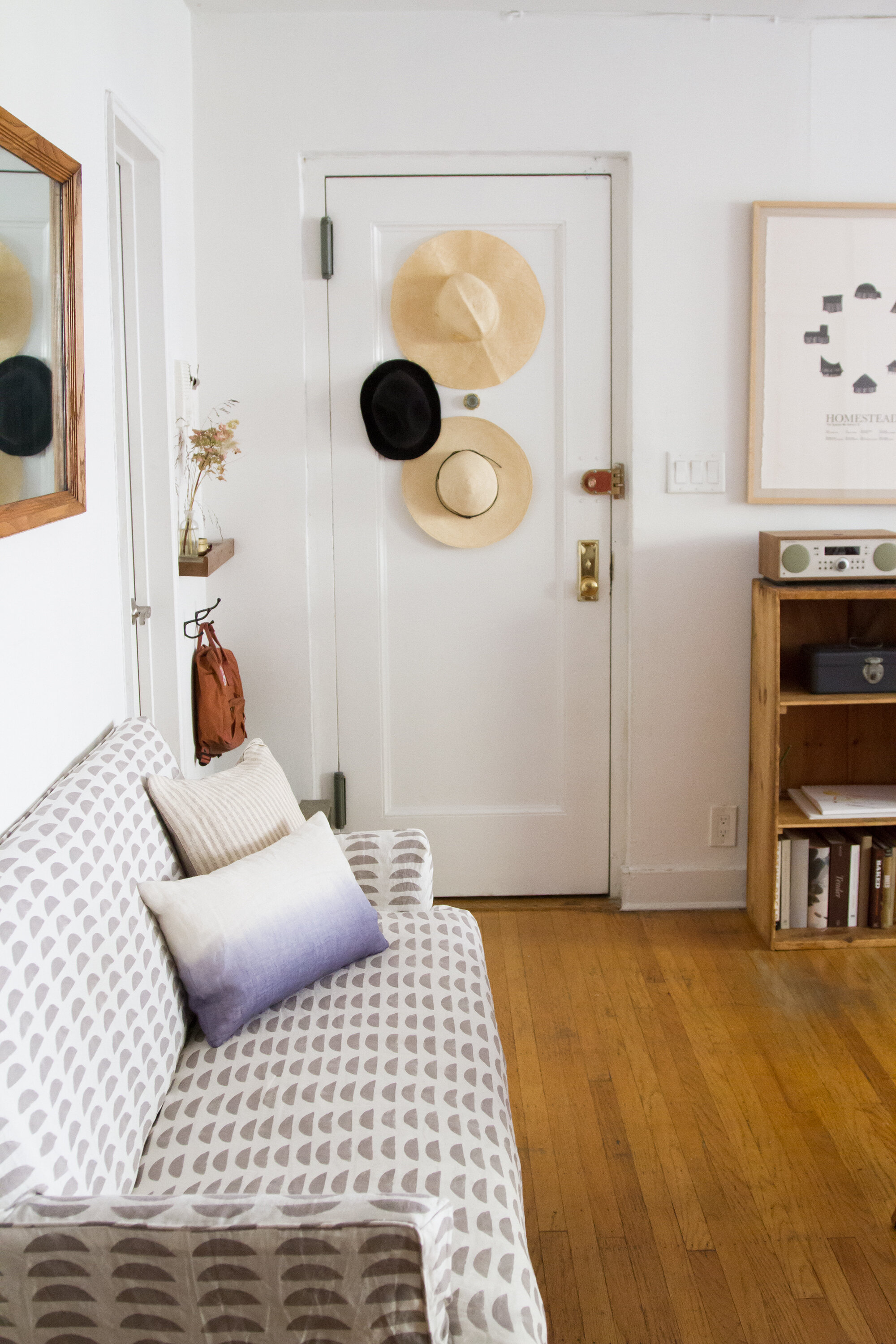 I’m the last person, really, who should be giving advice on introducing patterns into a small space. My typical counsel would fall somewhere along the lines of: Don’t. But like so many things related to surviving in a tiny apartment, that’s a personal preference and not some kind of commandment. In other words, it’s not that you shouldn’t introduce pattern when space is limited, it’s just that I typically don’t. I’m scared is why. Scared of committing to something that might feel dated too quickly and scared of feeling claustrophobic. Scared, especially, of being fickle myself.

This summer, my friend Rebecca Atwood, finally gave me the nudge to integrate a little pattern into our space. Truth be told, she’s been trying to give me the nudge for the past two years, it’s just that I’ve only now conceded, convinced in part by her brand-new book. Becca’s got a particularly good eye when it comes to both creating patterns and incorporating them into rooms. More than that, we share a certain fondness for the same colors. Both of us grew up on New England beaches and her muted color choices remind me of those places. (If you ever wanted to know where I look to for inspiration, just think of the blues and browns and grays of a mussel-strewn shoreline.) 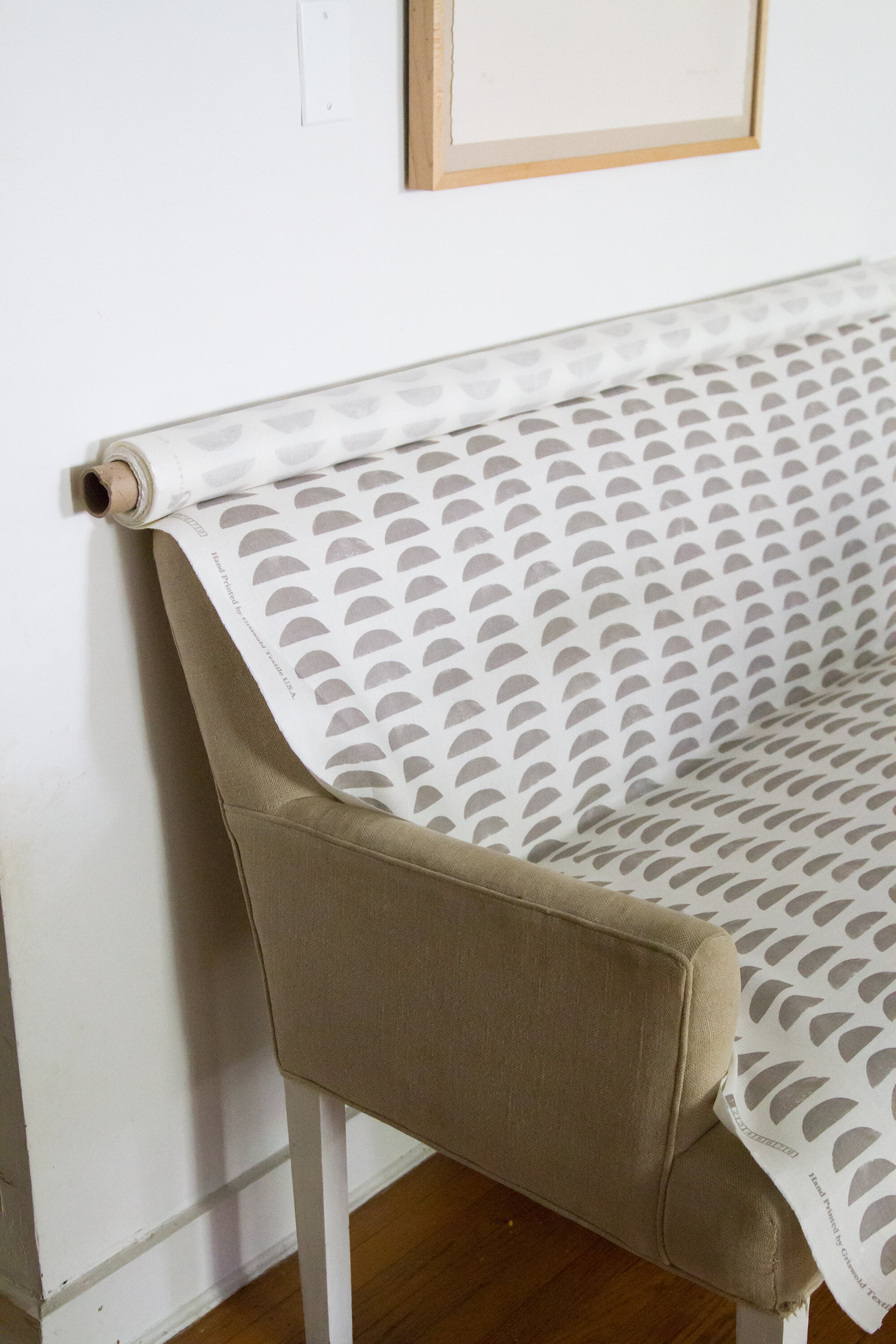 Finally convinced to dip into the world of pattern, I decided to do a swan dive.

Remember our upholstered bench? The thing that we moved in here last spring and that I resolved to immediately repair and slipcover? Well, better late than never. 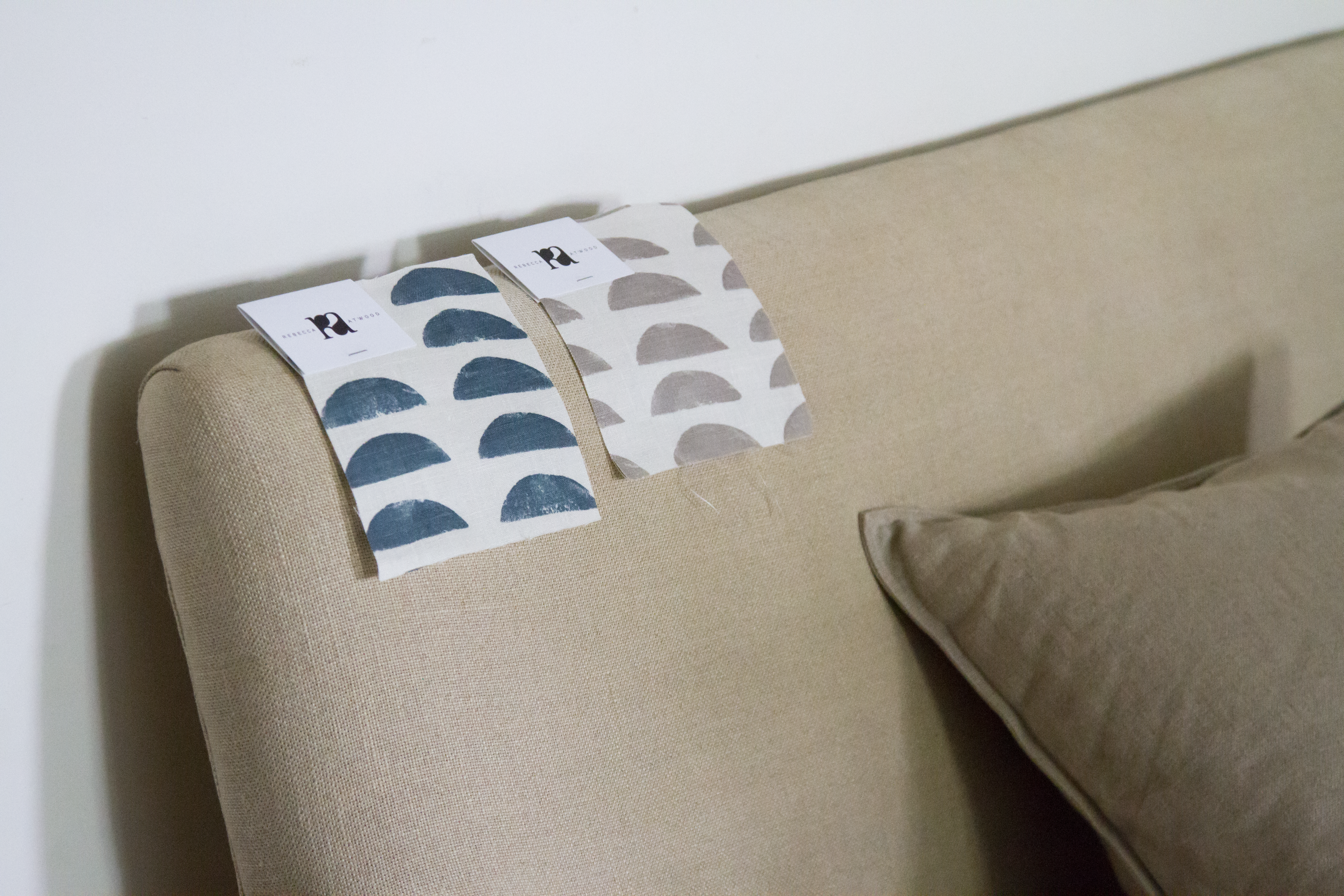 Having come to grips with the fact that I don’t know how to make a slipcover myself, I outsourced the work of the construction to a local upholstery business. The husband and wife team behind H & A Upholstery (Hector and Ana!) practiced their magic and made a super simple cover to match the integrity of the original pared-down bench. Best part is: it’s washable, which is good thing when there are errant plum-torte fingerprints ready to pounce. 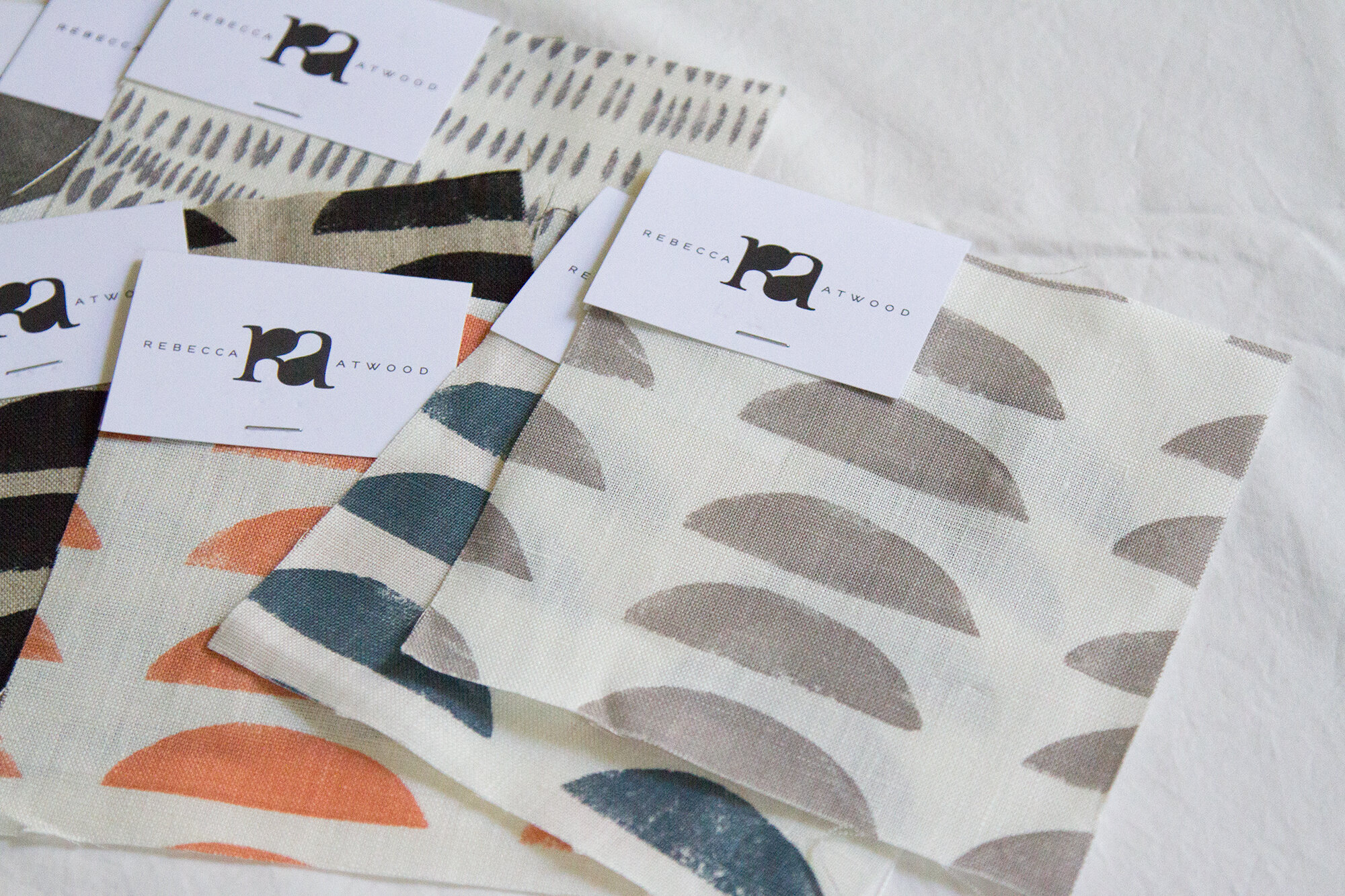 I followed Becca’s sage advice and chose a pattern from her line that falls firmly within the existing color palette of our apartment—the Hills fabric in the gray-wood colorway. I love the simplicity of the print—and the fact that Becca made it using a potato as her stamp. It’s an old-school approach to making a pattern and in this application the result is a design that feels both modern and timeless. 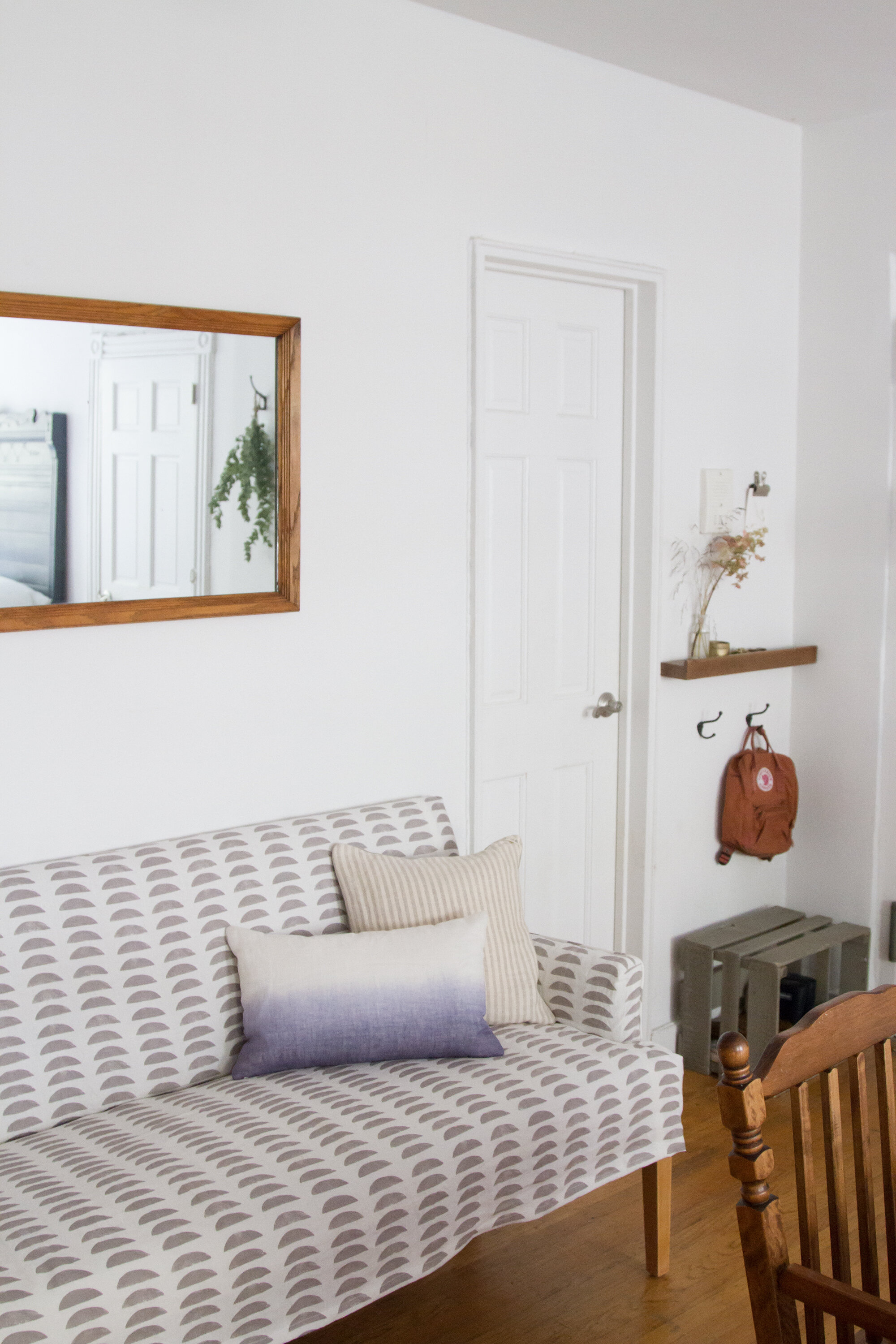 Nestled into the same short wall between our kitchen and bathroom where it was before, the newly punchy bench feels about ten times more inviting than its ripped up predecessor. The linen, which I washed before having the slipcover made (to account for any shrinkage), is soft and rumply but the cover itself is tailored enough to prevent it slipping into shabby chic territory. 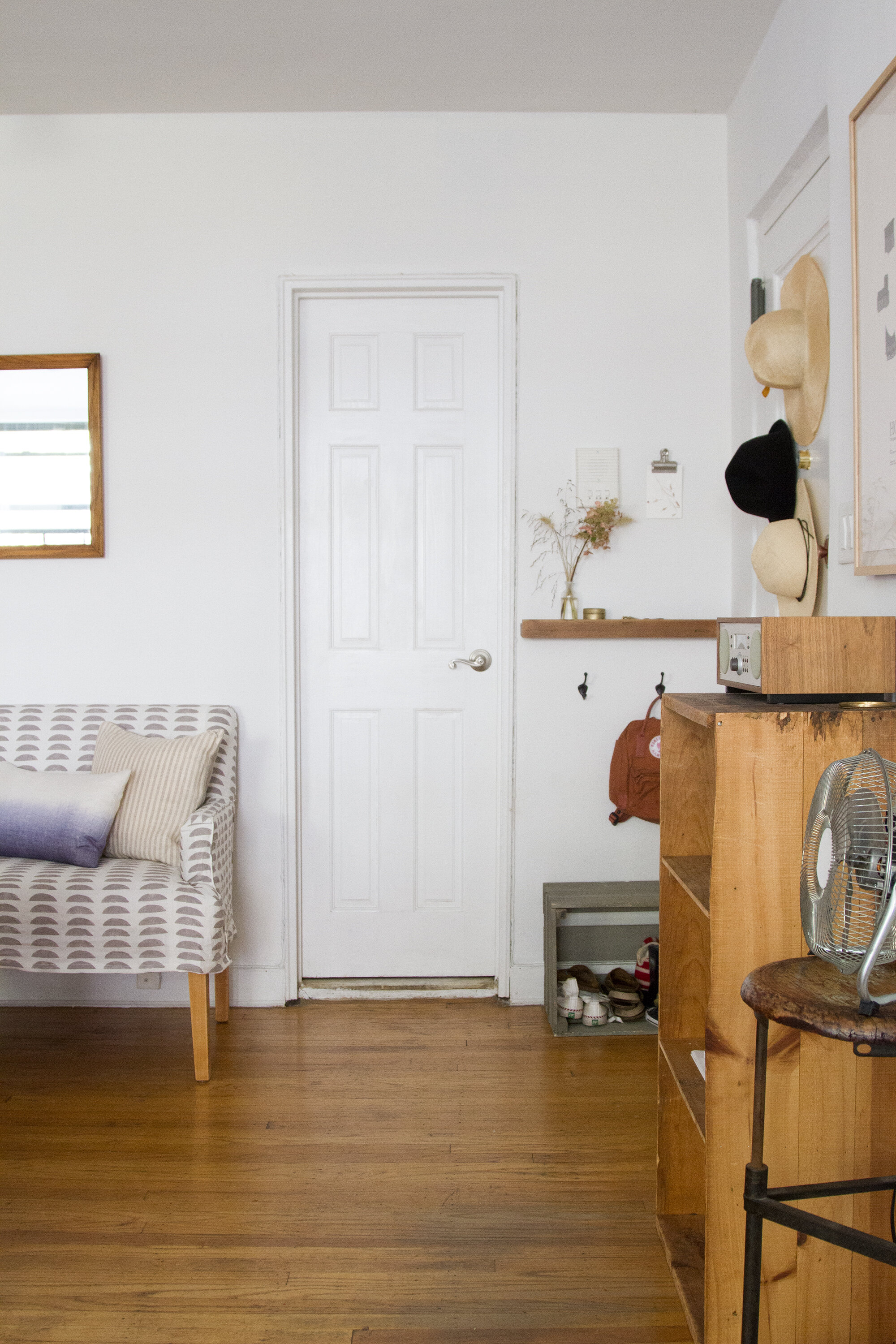 To my honest surprise, all this pattern required very little getting used to. The brighter color contrasts nicely with all of the bare wood we’ve got going on in here (including the bench’s newly sanded legs) and adds some needed lightness to the shady side of our apartment. 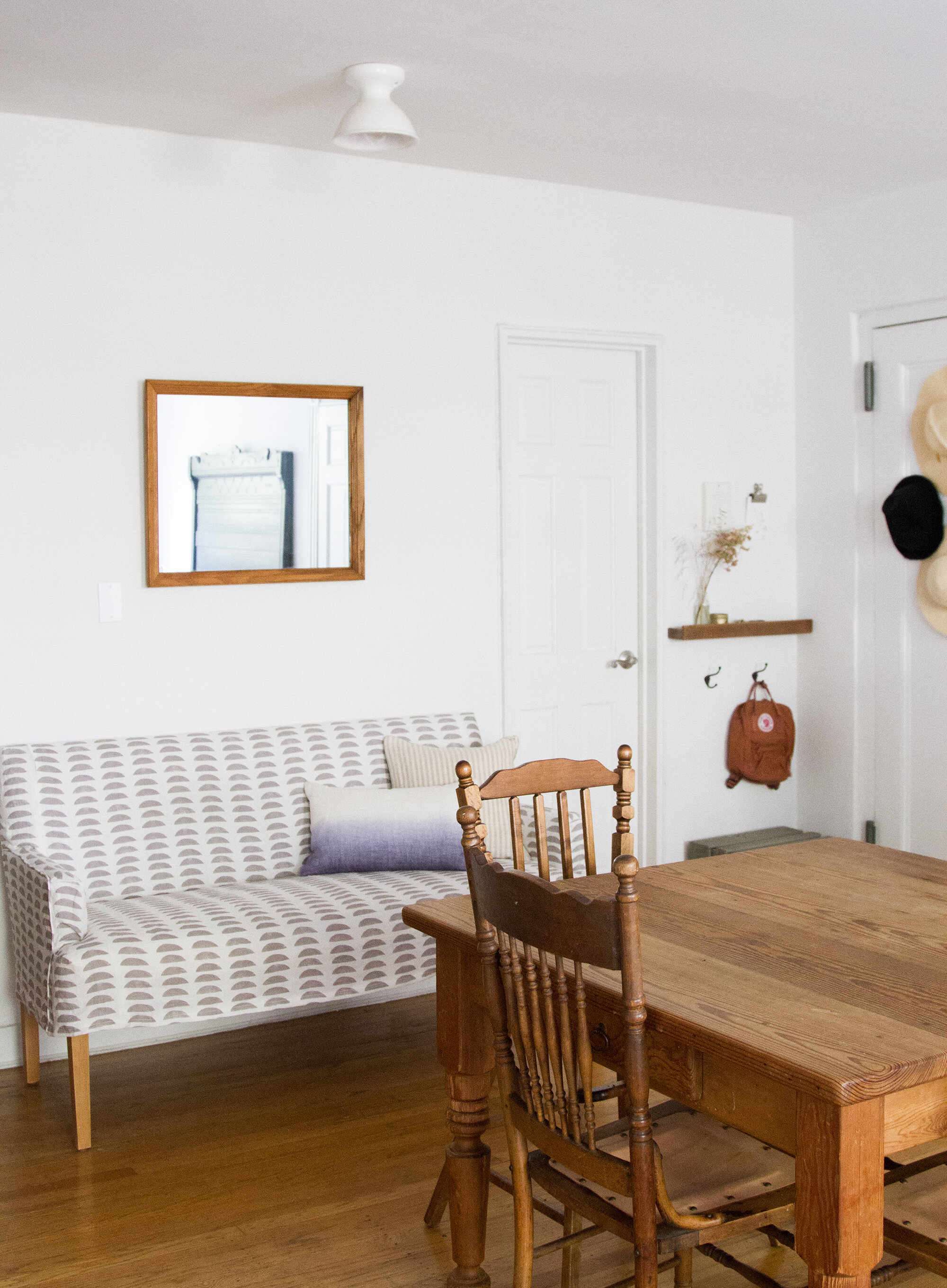 Livable pattern, is what I’d call it. Not too much, not too little. Just right. 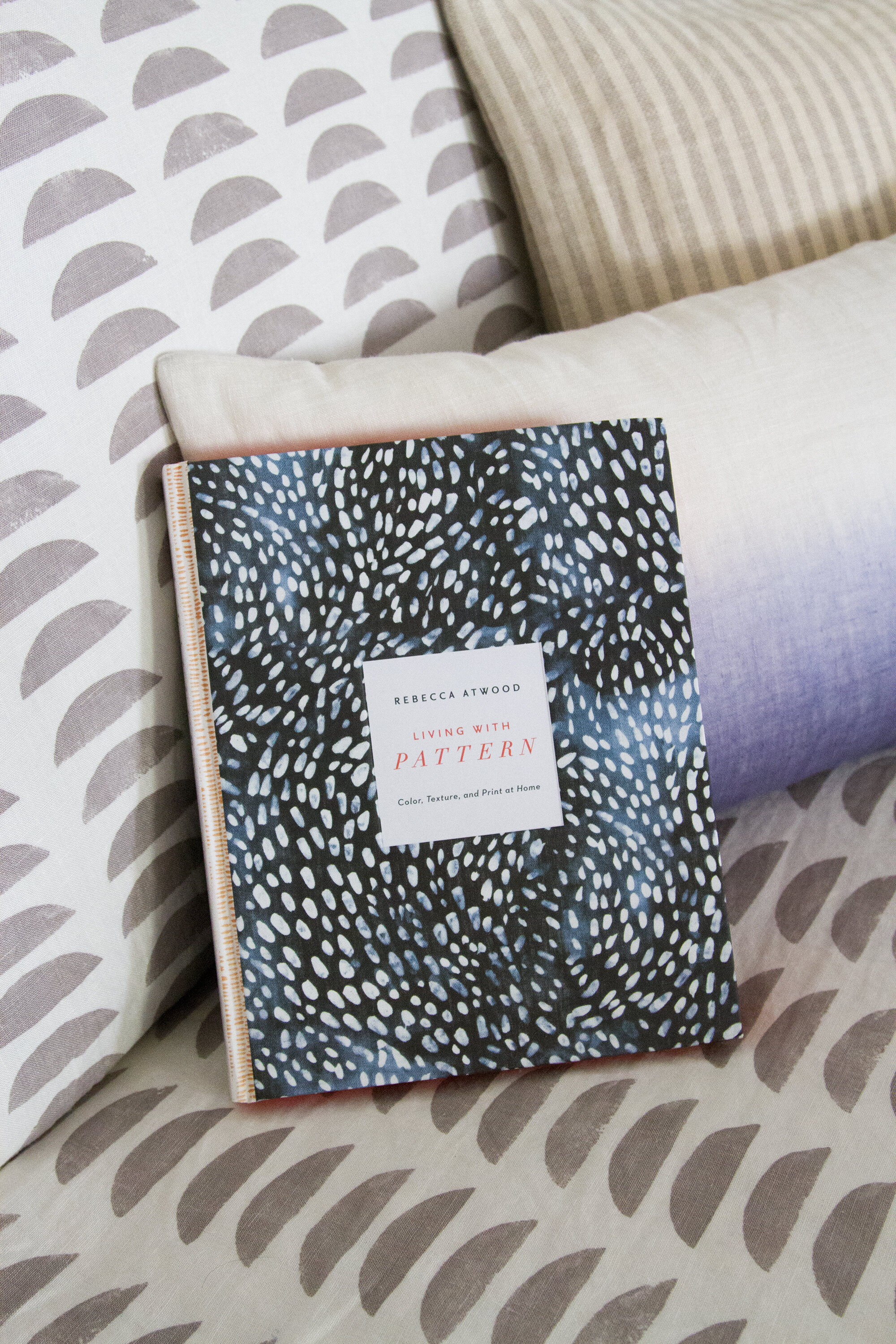 For lots more pattern inspiration from the real expert, and for peeks into projects and homes far more ambitious than my own, you can check out Rebecca’s brand-new Living with Pattern: Color, Texture, and Print at Home.

If you need a little reminder on homemade upholstery cleaner, HEAD HERE. 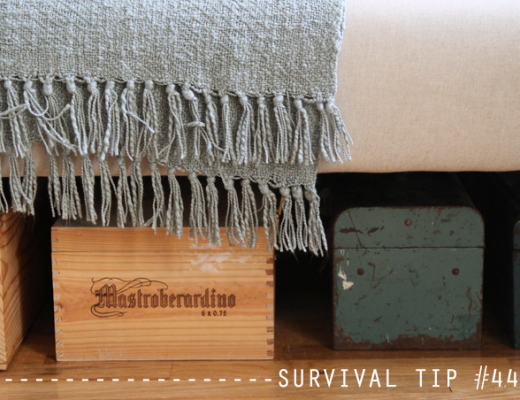 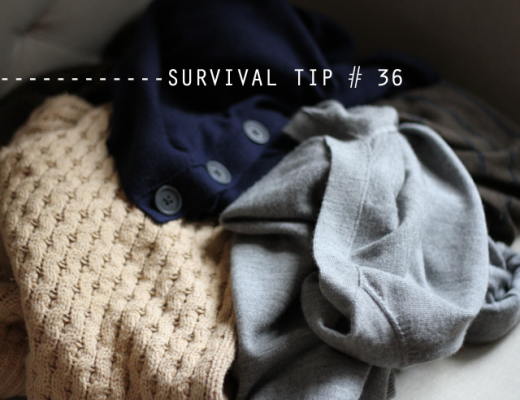 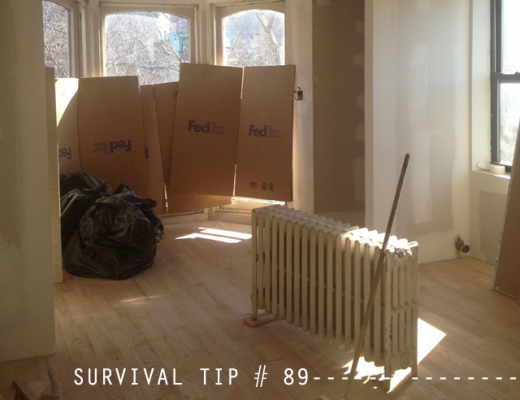