The first thing to know when tackling a reupholstery project is that those time-lapse videos that you see of people rapidly removing staples and easily smoothing fabric before giving a yank here and a pull here and stapling everything back together again are very inspiring. They’ll encourage you to take a screw driver and a pair of pair of pliers to your couch, extra-human speed and supernatural prowess shooting forth from your fingertips. They’ll give you the confidence to believe you can effortlessly dismantle your couch and seamlessly put it together again.

This is not at all to discourage anyone from ripping apart an upholstered piece of furniture, but I don’t want to sugarcoat things either. The process was laborious. The finished product has a definite DIY vibe. But it is a million times better than the ripped apart loveseat we were sitting on and it’s far better than tucking and retucking a toddler-ravaged slipcover twenty times a day.

While I had the energy and daylight I made a few quick videos of the process myself. I’ll post them to my Instagram account in a bit in case that’s helpful, but know that mostly I swore a lot, and got sweaty, and worked in my underwear after dark.

Putting aside the potential for false hope with timelapse videos, I did find watching video tutorials to be extremely helpful. A video I found on armchair reupholstery produced by Sailrite was particularly good. It was a comfort to watch because I knew they weren’t taking shortcuts or winging it and I learned the basics of upholstery that I wouldn’t otherwise have known. The video offers a comprehensive step-by-step for approaching an upholstery project from a professional. (It will also make you wish very much for a pneumatic staple gun.) Other amateur videos are interesting to peruse, but should be taken with a grain of salt. I found them most helpful to explore alongside the more professional tutorials, to get ideas for workarounds when I didn’t want to invest in particular upholstery materials or a sewing machine, but fair warning that many include silly shortcuts that I wouldn’t recommend.

+ Slim flat-head screwdrivers for prying up staples (though an actual upholstery staple remover is probably worth the small investment).

+ Pliers for pulling out staples (I used the one on my multitool).

+ A hammer for prying and flattening any staples that need it.

+ Upholstery fabric (I used two of these heavy duty cotton canvas drop cloths, which I washed and dried before use.}

+ Staple gun (I have one from my local hardware store, but this one comes with a staple remover.)

+ Tack strips (These are cardboard strips that help you achieve a straight line. I used fabric self-adhesive strips because I thought it might save time, but I’d choose the more traditional cardboard if I worked on another project.)

+ Take care: The biggest key for me was careful removal of the existing fabric. I used the exterior pieces as patterns to cut the new fabric and I reused the interior pieces that were in good condition. Taking the couch apart piece by piece also informed how I would put it all back together. Because part of the original upholstery was sewn in places, I had to accommodate for how I would change the pattern to allow for folds and tucks instead of seams. This was largely trial and error and the places where I was able to match the pattern exactly were by far the most successful.

+ Get creative: The original upholsterers of our loveseat used metal tack strips to secure four edges of fabric to the sides of the arms and back of the couch. I managed to reuse two of these, but two were too far gone and so I opted to simply fold a clean edge and use exposed black upholstery tacks along the back of the couch. It wasn’t a recreation of what was done originally, but there’s just about nothing I love more than tiny black upholstery tacks and they’ve been perfect in this spot.

+ Be prepared: The finished couch is totally passable but not perfect and it was undoubtedly a beast to work on. I chose not to invest in replacing the latex foam or wool batting, and so places where that had gotten funky due to upholstery damage and a decade of use, remain funky. The loveseat is still really a bench and it’s still not big enough to stretch out on. All told the project took about 50 hours to complete from start to finish and in the interim, things around here were a bit of a mess. Still, it’s a vast improvement over what we’d been dealing with and I did it myself, so: Nothing but love for this wonky little loveseat.

This post includes affiliate links. Reading My Tea Leaves might earn a small commission on the goods purchased through those links. In case it’s helpful, here’s a running list of my most-used project supplies. 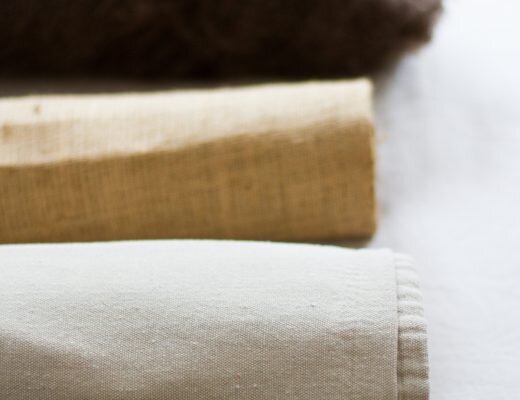 DIY furniture projects: is it worth it? 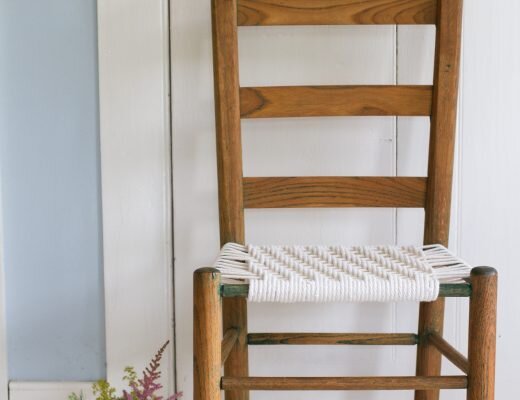 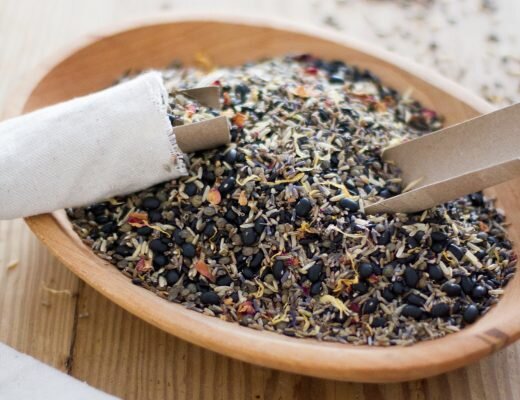 make your own: draft guard.